Sunday In The Park With George, Pinney 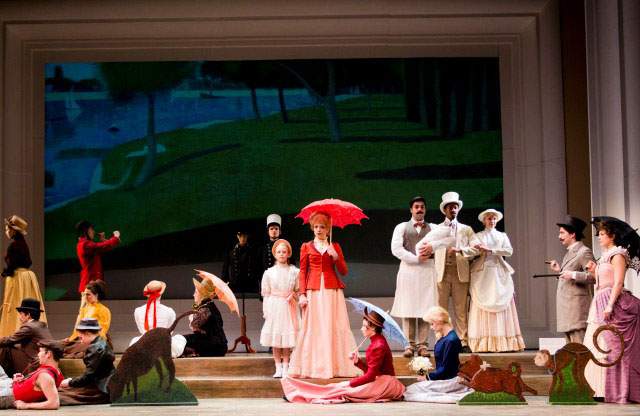 The Indiana University Department of Theatre and Drama is putting on a terrific production of Sunday in the Park with George directed by their own George, George Pinney. On the stage of the Ruth N. Halls Theatre, the famous painting literally comes to life. Its characters step in and out of the frame. Part of the magic is just how personably, chattily, gripingly, sweatily the graceful fuzzily rendered characters rendered by George Seurat with all those little dots in the painting become.

Colin Schreier was very effective as the self involved revolutionary artist. He sang and acted with authority. It's a difficult role because the character is so self involved and outwardly cold. Schreier was able to show that it was the inner drive of the artist that simply overcame the normal sympathies and concerns that his loves and his friends expected.

Elaine Cotter sang very, very well and was wonderfully sympathetic and even funny as Seurat's mistreated thirty something mistress in 1886 and later as the ninety-eight year old grand-mother of his artistic great grand son in 1984.

In some productions a single actor plays Seurat in both centuries. At IU director George Pinney has chosen to cast as second actor as the 20th century George. Nathan Robbins was very successful as the great grand son, a conflicted young man seeking to find his own unique style and approach. The casting allowed the 19th century Seurat and his mistress to effectively join in the 20thc scenes.

Frankly, the first act of Sunday in the Park with George is more interesting than the second. The development of the famous painting, the fascinating presentation of all the characters separate but interlocking stories is wonderfully handled by the dramatic scenes with Lapine's lyrics and Sondheim's music. Although the same actors appear in the 20th c, their parts are not as developed and they are just not as unique, foreign and interesting.

The grand son's struggle to utilize and then escape from advanced technology is not as fascinating as the older Seurat's passion with his vision and materials. The heft and the insights of the act in the 1984 haven't aged as well as those in 1896. That may well be one of the play's points.

The IU production is a visual and auditory delight. It boasts a very strong acting and singing cast. Music director Terry LaBolt leads the richly scored show with an eleven member ensemble that includes strings and winds. Dan Tracy's scenic design with Amanda Wray's lighting allows the painting to come to life, change and grow right before our eyes as the story demands.

Sunday in the Park with George has final performances in the Ruth N. Halls Theatre, evenings this week and on Saturday there's a two o'clock matinee along with the evening show.