"Street Car," Then And Now 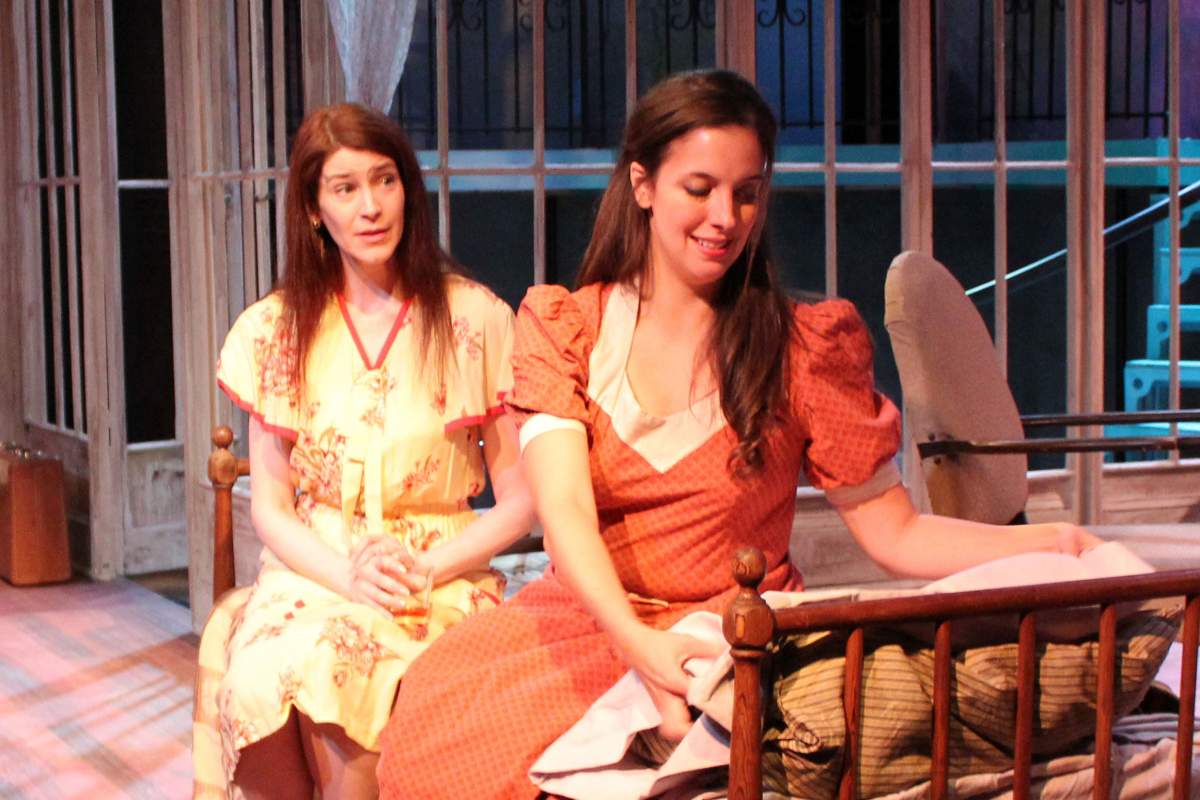 The Cardinal Stage Company's production of Tennessee Williams' A Street Car Named Desire is part of company founder Randy White's "Bucket List." He joking refers to …Street Car… as a classic play that one should see before they kick the bucket.

A classic of American Theatre it is. For some theatre goers this will be a rich first exposure, but for many either through a production or the film this is a chance to add to and perhaps revise our first impressions.  A lot has changed since 1947 and we bring radical changes in society and in our own perceptions to the theatre in 2014.

Upstairs in the Ivy Tech John Waldron Arts Center Auditorium as we look over Mark Frederick Smith's wonderfully detailed garden apartment. lighted by Jeffrey Salzberg. sound designer Mike Price brings the Quarter alive with the noise of the trolley, the street peddlers and music wafting in the always open windows as the ceiling fan fights its unequal battle with the hot sticky weather.

The very nervous Blanche Dubois, Carrie Lee Patterson, arrives at the apartment of her nicely settled younger sister, Stella, Amanda Catania, and her blue collar husband Stanley Kowalski, Matt Holzfiend. Quickly we learn that Blanche is fresh from watching the dissolution of the family's Mississippi estate, and later that she's been dismissed from her teaching job over an affair with a seventeen year old student.

Stella has settled into life with the rough Stanley. It's a passionate relationship that frequently involves simply accepting that arguments may go beyond words to blows. Their relationship is echoed by that of their upstairs neighbors their land lord Eunice, Connie Shakalis, with her husband Steve, Steve Heise, a poker playing buddy of Stanley's.  There's plenty of yelling, and real physical conflict in …Street Car…

While trying to navigate the ups and down at Stanley and Stella's apartment, Blanche looks for a port in the storm and seeks to woo Mitch, Vincent Teninty, a former army buddy of Stanley's. Blanche works hard to play the untouched southern belle and only Stanley's research into her less than belle like past breaks things up.

As Stella is in the hospital giving birth, Stanley and Blanche really have it out going all the way verbally and perhaps physically. Blanche whose grasp on reality has been shaky loses it and we have the finale as Blanche taking the arm of the doctor who is taking her to the mental institution says "I have always depended on the kindness of strangers."

Carrie Lee Patterson as Blanche does a fine job as the edgily nervous Blanche. She handles the wonderful poetry of Tennessee Williams set speeches so eloquently, that I'm hearing some of them two days afterwards. Matt Holzfiend is ever the hair trigger brute of Stanley Kowalski. In his own way, he's as nervously defensive of his territory as is Blanche. Amanda Catania's Stella is her own character and yet also a sail that is blown from side to side by these two powerful personalities.

Vincent Teninty was always on  as the sensitive Mitch who's actually turned into a bit of a nineteenth century beau by the wooing of Stella. It's a complex role and  Mitch is  both angry and sad when the knowledge of Blanche's past from Stanley destroys the illusion.

The Cardinal Stage Company's production of Tennessee Williams' classic is a very satisfying and rich production a good opportunity  for first timers to cross it off their "bucket lists." For those of us revisiting the play, I think we'll find that especially as Carrie Lee Patterson plays her Blanche is more of a figure to pity and understand than condemn. Her sexual past isn't quite as shocking as it probably was in 1947 and perhaps even when we first saw it.

I think that today we're probably a good deal less understanding of Stanley's macho role as a wife abuser and beater. Although, and I add this just as a footnote… there are no details of what his role in the army was,  but perhaps today we wonder about post-traumatic stress disorder.