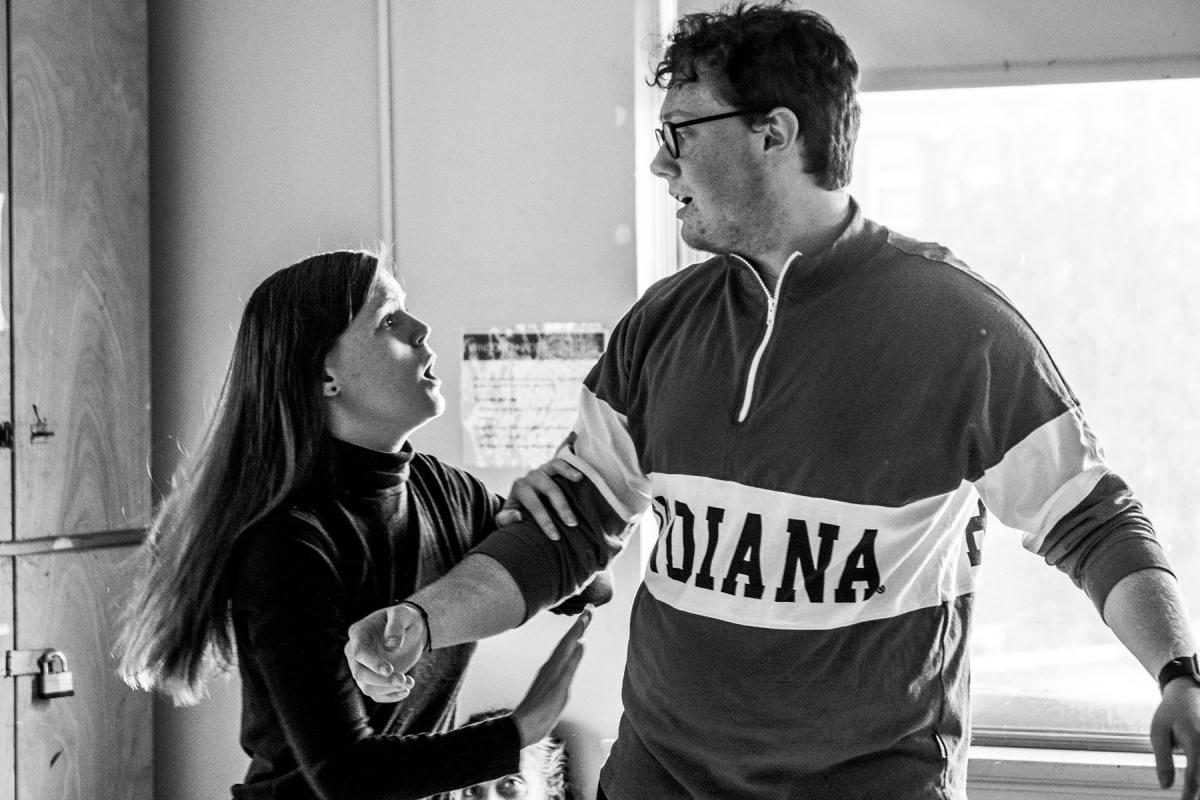 Star Crossed Lovers at the Ivy Tech John Waldron Arts Center is Don Freund’s colorful reimaging of Shakespeare’s Romeo and Juliet as musical theatre. Freund is the conductor. Paul Daily of Ivy Tech is the director for the production. Vocal coaching is by Brian Samarzea. I was able to see the dress rehearsal. Performances are Thursday, Friday and Saturday, November 21, 22 and 23.

Right from the beginning, the Capulet servants Subin Bae and Sheila Raghavendran pick a fight with the Montague’s Niccolo Miles and Sonia Velazquez. It’s no surprise to Bloomington audiences that women are wielding weapons. Patrick Kelly’s complex fight choreography has its first display. Benjamin Adams as Benvolio seeks to stop the fight but Julio Aleman as Tybalt draws and complicates the Melee. Thomas King as the Prince arrives and declares that peace or death will prevail.

Early on Freund gets to exploit the advantages of musical theatre in propelling the story. Romeo, Garrett Thompson describes his infatuation with Rosaline to Benvolio on the right. Juliet, Brianna Murray with her mother Maria Walker and her comically talkative nurse Christina Dragnea talk about Juliet’s options for marriage on the left.

Romeo, Benvolio and Jamil Fuller as Mercutio attend the masked ball welcomed by Lord Capulet, Paul Pisano. We get a sample of Freund’s period dance music with the choreography of Cameron Barnett. Romeo is smitten with Juliet and manages to leave his fellows and come back to her garden for the balcony scene where the two plight their troth and decide to marry. From time to time Dragnea as the nurse seeks to interrupt the proceedings.

Early on the morrow Romeo poetically visits Christopher Goodbeer as Friar Lawrence who agrees to marry the couple. Romeo full of good will comes on Tybalt and Mercutio dueling and in seeking to separate them, Mercutio is killed. The angered Romeo kills Tybalt. This is too much for the Prince but counseled by Benvolio to clemency he banishes Romeo.

Romeo and Juliet do enjoy a night together and only disagree on whether the birdcall are of the morning or of the night. The plot winds as Juliet plans on taking a drug to appear as dead while Romeo misses the message. In the confusion of the finale both perish and the Prince offers his third and most thoughtful message for the families of the Star Crossed Lovers.

Freund conducts the production with music that ranges from sunnily lively to dramatically dark. His orchestra is designed for varied colors with multi instrumentalists playing their lower partners. Piccolo, flute and alto flute appear with oboe and English horn, clarinet and bass clarinet, the saxophone family from soprano to baritone, a bassoon and a contra bassoon and of course a tuba. There’s also a string quartet, with a double bass, a harp and a keyboardist playing piano and celesta.

Throughout director, Paul Daily makes creative use of David Wade’s design for the space with thoughtful attention to the musical aspects, the fight scenes and the choreography. I especially enjoyed Garrett Thompson as Romeo, Benjamin Adams as a classy Benvolio, Julio Aleman as stylish Mercutio, Maria Walker as a graceful Lady Capulet, Christina Dragnea as the comic Nurse and Christopher Goodbeer as the thoughtful Friar Lawrence. If you’re familiar with Shakespeare’s play, it will be a pleasure to see it as musical theater. If your new to Romeo and Juliet it a good introduction.

Don Freund’s Star Crossed Lovers plays Thursday, November 20th, Friday November 21st and Saturday, November 22nd in the Ivy Tech John Waldron Arts Center at 7:30. Lighting is by Aaron Bowersox with costume designs by Kaya Cieslinski.There’s a preview discussion about Don Freund’s history with Romeo and Juliet and his goals for the production at wfu.org/arts.