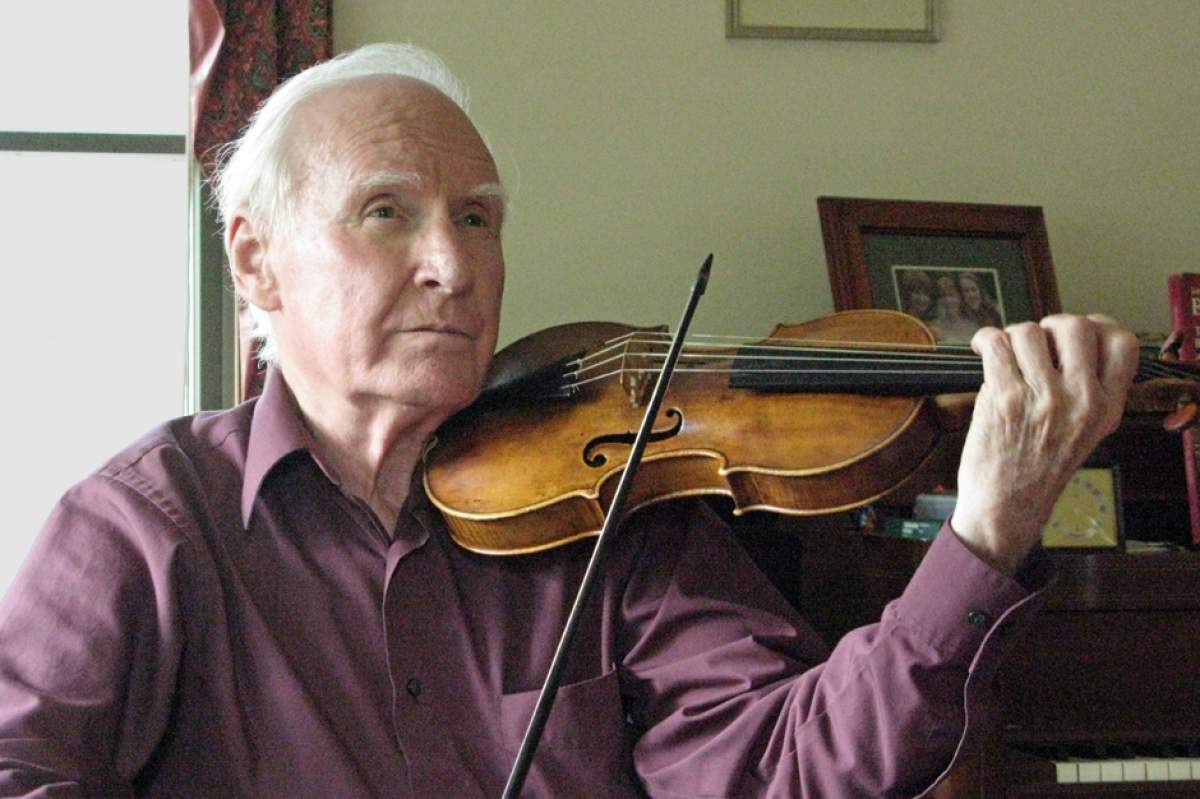 Acclaimed violinist Stanley Ritchie has been teaching baroque violin for more than 30 years, and his former students have prominent careers around the world. Now, the IU Jacobs School professor has written a book for violinists to guide them through what Ritchie calls the "mysteries" of playing in the baroque style. WFIUs' Adam Schwartz met with Ritchie and with one of his students to discuss his new book, Before the Chinrest.

"Chinrestless" is the term Stanley Ritchie uses in Before the Chinrest to describe playing the violin without the modern aids of the chinrest and shoulder rest. Ritchie believes that playing the violin with those devices creates tension, and he insists that his students play without them. I sat down with Ritchie in his Bloomington home and asked him what his aim was in writing the book.

"There were many people interested in knowing more about the style of Baroque performance, which I spend a lot of time on in the book, as well as technique," he began.

"And for those who are specifically in Baroque technique, as it differs from modern technique, I spend quite a bit of time on that too, and try be clear as possible about my methods."

Was his desire to get musicians to play without a chinrest?

"No, no, no," he says emphatically "I wouldn't say that. I mean, I insist on my own students doing it. Because I want them to have the experience. Obviously it's an option."

"I'm not terribly pleased when I see people who claim to be Baroque violinists using chinrests. Because in my opinion, you can't do the same things expressively or as naturally when you're holding the instrument with the chin. It's my experience that playing without the chinrest liberates one expressively. That may sound strange, but when the violin's free to move, instead of being clamped between the chin and collarbone, somehow, something very special happens. But that's my experience, it may not be true for everybody."

When he has his students play without a chinrest, do they encounter any difficulties?

"Oh, certainly. I've had first-class violinists who've just come from playing a Romantic concerto and stand in my room and look at me piteously and say, â€˜I feel like a beginner!' And they are!"

Practicing Over the Bed

One of those experienced violinists who felt like a beginner when studying with Stanley Ritchie, was IU Jacobs School doctorial student Janelle Davis.

"When I flip thru the book," Davis says, "I hear his voice in my head, and I feel like I'm in the studio with him. I feel like he's solidified . . . a handbook of all the lessons I've ever had studying with him."

For Davis, learning how to play without a chinrest was a struggle.

"I remember feeling like I was always going to drop my violin," she says. "Because I was balancing rather than holding the instrument. And so, when I would practice, I would practice over my bed so when I did drop my violin-which happened more than once-it didn't fall crashing to the floor. There was something to catch it."

"I feel like it's freed up everything for me, actually. There's something to be said for holding a violin so freely and so loosely without holding on with your chin or your shoulder with a shoulder rest or a chinrest. . . . If you feel like you're going to drop the instrument, then maybe that's a good thing. Because you're very loose and you can really maneuver and you can get around on the instrument."

I asked Ritchie what he would you say is the most rewarding aspect of playing without a chinrest.

"Freedom," he says. "That's what it's all about. I was for the first thirty years of my musical life totally unaware of any other way than with a chinrest. And it was only after I discovered the Baroque violin-and I continued to play for many years after that as a modern violinist, professionally, and still do occasionally-it was only then that I suddenly realized, â€˜Wow, there's something else. Something very, very special here.'"

"I suddenly feel liberated-that's the only word I can think of. Freer technically, freer expressively. Â And it didn't take too long for me to get used to holding onto the instrument and not holding on to it."

He adds, "It's something that I really believe in and I encourage everybody who is as interested and curious as I was in what it felt like to be a musician in the 18th cent, 17th century, to give it a try! You might like it."