Standing Outside The Spotlight, Finding Her Voice 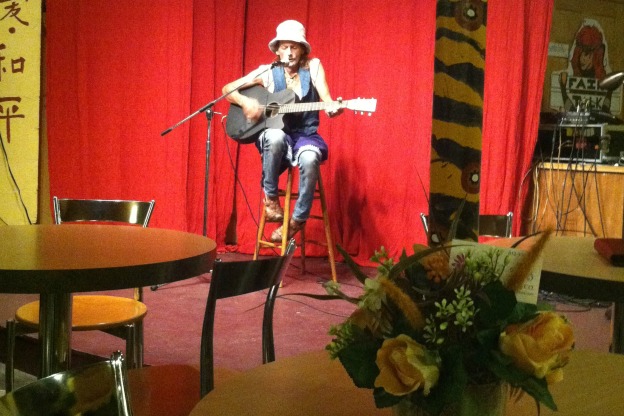 Bloomington, Indiana is a hub for internationally known professional musicians. But it's also home to many other musicians-musicians who have been at it all their lives but remain obscure. Singer songwriter Kay Bull is one of the latter-known mostly to those who frequent the town's open-mic scene. Yes, she's been interviewed a few times before, but not about her music. Still, Kay Bull finds that living outside of society is integral to her artistic perspective.

She started playing guitar as a teenager.Â "We lived very rural," Bull recalls.Â "I didn't have a lot of people around me so I didn't really have anybody to learn from, just whatever I could kind of figure out by myself."

Mostly I got into making songs because of protest singers. And I had a lot to protest. Most people think I'm kind of a kook. I protested most everything in the twentieth century.

When she was about 14, Bull's family moved to Indianapolis where she saw her first open-mic. That was about 50 years ago. She's been working the open mic circuit ever since.

I caught a recent performance at Rachael's CafÃ© in Bloomington.Â Sitting on a wooden stool in the center of the stage, black acoustic guitar in hand, a small bucket hat on her head, Bull's slight frame stood out from the red drapes.

Activism was the impetus for songwriting back in high school.Â "Mostly I got into making songs because of protest singers," Bull explains. "And I had a lot to protest. Most people think I'm kind of a kook. I protested most everything in the twentieth century."

And she's still writing and performing to express her beliefs and change minds. But she writes and plays other kinds of songs too.Â Lately, Kay says,Â many of her songs have been about love.

Be It Ever So Humble

She writes most of her songs in her 26-foot travel trailer.Â She's invited me to join her here to talk.

"It's my little gypsy wagon," Bull jokes, once I arrive. "And it's not much space, but I get along fine in it. My hope is that one day it's going to sit somewhere other than here. This street out here is murder. But my life has always kind of been on the edge, and I've always lived in compromised dwelling places. But as far as this, this is like a luxury hotel suite for me."

She makes an old lamp stands into a microphone holder for the interview and offers me a seat on a small bench against the wall. A handful of small, plastic skeletons hangs from the ceiling. Bull is making a costume out of them.

When it comes to writing, Bull says, "I don't know where any inspiration comes from and when. I mean, I've been a wordsmith for a long time just playing with, like Shel Silverstein, who was goofing off and playing with words. After you do it long enough why, some things just fall together like a jigsaw puzzle when it's partly worked ya know. Suddenly, why, the pieces start going together a lot quicker than they were in the beginning, kind of like that.

It's bitterly lonely, but .. you can be more of an observer.Â And it's a lot easier to find time for yourself to go and digest what you've observed, and translate that into whatever it is you are going to sing about.

A song writer and an activist, Bull also identifies as transgendered.Â That aspect of her life has prompted media attention in the past, but she considers it "comforting, exciting, and a breath of fresh air" to change the subject. "This is the first time that I've ever spoken to anyone about my music over being transgendered.Â That part of my story is a long, long story. I don't know how to make it short and I don't even know if I can tell the story because really I don't understand it all myself. Some things just are."

Art From The Edge

Although Bull refuses to be defined by being transgendered, she says that it does keep her on the margins of life.Â And it can get lonely on the outside. "Very lonely, bitterly lonely," she elaborates, "but it kind of keeps people at enough bay that you can be more of an observer.Â And also it's a lot easier to find time for yourself to go and digest what you've observed, and translate that into whatever it is you are going to sing about."

"Ode to Cassandra" is one of Bull's signature songs.

"She is a woman who lived in Troy during the time of the Trojan war," Bull explains, "and she was a prophetess. And everything she prophesied came about. But when she prophesied these things, no one believed her because everyone thought she was kookoo."

It's difficult not to hear the parallel between the subject of the song and the songstress.

"I just have to believe that if people could really see what I see, there would be more of an effort to curtail some of the dangerous things that are going on, but at the same time, Molly," Bull sighs, "people live far differently than I do."

As far as her own future is concerned, Bull's prophecy is fairly modest.Â She's 64 now. "My hope for the future is that I can one day really get a half way decent CD put together," she shares, "maybe a couple of them. I still have hopes that maybe somebody out there would join me musically and be interested enough in my songs to want to make productions out of some of them."

"I remember when the future seemed a lot longer than it is today," she reflects.