You Can't Take It With You: Sparks and Sparking 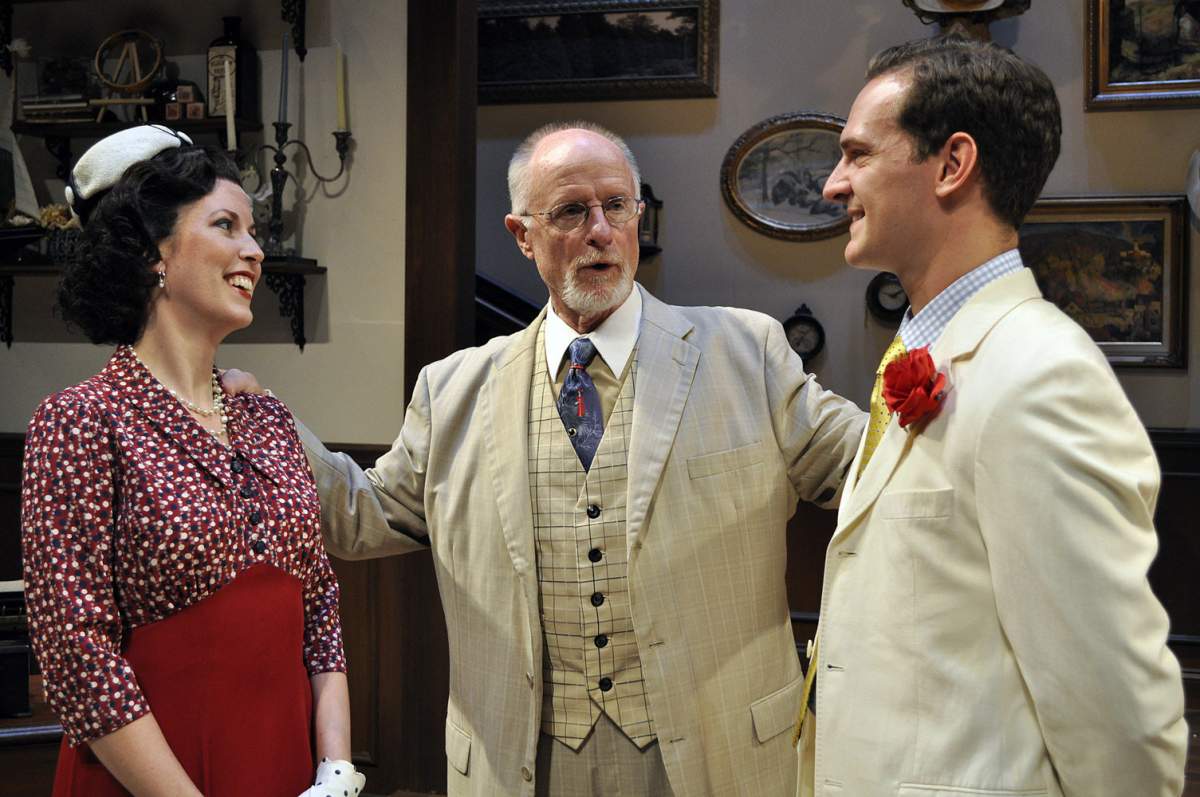 You Can't Take It with You is Kaufman and Hart's Pulitzer Prize winning comedy from 1936. Alice, the eccentric Sycamore family's daughter, played by Molly Casey, has fallen in love with the conservative Kirby family's son Tony, played by Aaron Densley. Â Love between these relatively innocent young people brings their very different families together and sparks fly at the Indiana Festival Theatre Â in a production with a strong cast directed by Dale McFadden.

Tony's father is a stiff financier played by Ray Hedin. Mrs. Kirby is an even starchier society matron played by Nancy Lipschultz. To use a word from later era, the Kirby's are pretty â€˜square.'

Alice's father, Paul (Rob Johansen) creates fireworks in the basement. Her mother, Penelope (Abby Rowald) is currently a playwright. She was a painter, but a typewriter was delivered by accident some years ago and so she became a writer. Alice's sister, Essie (Nicole Bruce) is a talentless ballet student who makes candy, pedaled door to door by her husband Ed (Jaysen Wright). Alice's grandfather, Martin Vanderhoff (Ken Farrell) decided thirty-five years ago to give up working six hours a day to enjoy one hour of fun and retired to have fun all the time. Â Except for the hard working Alice, this loving familyagain in words from a later era-is a bunch of Â libertarian life stylists.

As if the family weren't eccentric enough, there is a circus of regulars at the Sycamore home. Timothy Pyles plays Mr. De Pinna. De Pinna was an iceman who made a delivery eight years ago and never left.Â He's acted as model for Penelope when she painted and is a partner in Paul's fireworks production. Adam Noble is Essie's temperamental Russian ballet coach, Boris Kalenkhov. Andrea Mellos doubled as a very funny drunken actress and a very regal former grand duchess.

Metaphorical sparks of tension between the Sycamores and the Kirbys flash. Real sparks set off all the fireworks in the basement. The sparks of love continue to glow between Alice and Tony. It's up to Grandpa to bring their two families together as they hesitantly hold hands around a dinner table.