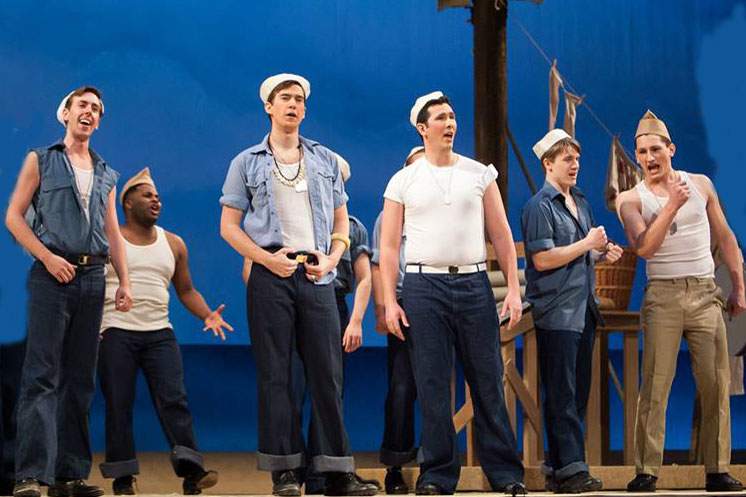 Are you tired of snow and slush? About had it with winter? Well, there's "sunlight on the sand," (and) "moonlight on the sea," at IU's Musical Arts Center's South Pacific.

Whether you grew up with the LP of Mary Martin and Ezio Pinza or the film with Mitzi Gaynor and the voice of Giorgio Tozzi, you know South Pacific. You can hum the exotic intervals of "Bali Ha'i," remember some of the words or the spirit of "Younger than Springtime," andespecially if you're a basssing "never let her go" with the wonderful falsetto ending.

We know South Pacific better than even the most familiar opera. We have references and high standards. Perhaps we're even a little afraid of going to a production, might we be disappointed? Let me reassure you. From the opening notes of the overture conducted by Constantine Kitsoupolos through to the bitter sweet finale, IU's South Pacific will charm you.

Saturday night's Jessamyn Anderson was all of the "cock eyed optimist" of a Nellie Forbush that you could wish for. Johann Schram Reed made a resolute, sympathetic and moving Emile de Becque. James Reynolds indeed was a young lover, angry at having been "carefully taught" about racism. Marlen Nahhas was the entrepreneurial Bloody Mary, foul mouthed and yet mystically moving as she sang of Bali Ha'i. Evan Forbes was the ever scheming Seabee and Nelli's "honey bun" Luther Billis.

Nathanael Hein and William Huyler were the base's commanders, humorously frustrated at being on South Pacific's beach and out of the war, but dramatically strong in the tense moments of the drama. The male chorus of Seabees, sailors, marines and soldiers and the chorus of nurses sang very well . They gracefully executed the smooth and the silly choreography of Selene Carter and Satsu Holmes. Each singer actor seemed to have a well thought out individual part.

This is a final production for IU Jacobs School of Music faculty member and stage director Vincent Liotta. South Pacific is very much a part of the history of the American musical. The IU production is blessed with a director who knows and loves the American musical's roots in operetta and who's been one of the pioneers in its development and exploration of it as fully integrated music drama. Over his twenty years at IU, Liotta has directed more than fifty shows, making the word "theater" resonate in the title IU Opera Theater.

There are two more chances to see IU Opera Theater's South Pacific Friday and Saturday, March 6 and 7 in the Musical Arts Center