Something's Rotten at the IU Auditorium 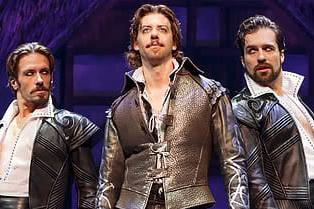 Mathew Baker as Shakespeare with entourage

The IU Auditorium is no stranger to vintage theatre and it welcomes a show from the 90s this Wednesday and Thursday the 1590s.

Devin Holloway is the minstrel who leads the cast in “Welcome to the Renaissance.” I’d read the text and still missed about seven-eighths of the lines, but the energy and the dancing made for an infectious opening.

Something’s Rotten presents the comic efforts of two brothers the resolute Nick, Mathew Michael Janisse and the hesitant Nigel, Richard Spitaletta to compete with the flashy upstart Shakespeare, Mathew Baker. Along the way with the help of a sooth sayer, a very funny Nostradamus’s nephew, Greg Kalafatas they invent the musical.

In the process, Nick gets the whole prophecy wrong and tries to produce Omlette instead of Hamlet. The dancing eggs have to be seen to be believed. Nigel, the poetical brother falls for the lovely religious Portia, Jennifer Elizabeth Smith who’s rebelling against her redoubtable father, Brother Jeremiah, Mark Sauders. Nick’s wife Bea is a woman ahead of her time, Emily Kristen Morris. Bea puts on work clothes and a moustache to go out to support her family.

Mathew Baker who plays Shakespeare is a darkly magnetic figure as a leather clad matinee idol surrounded by a leather-clad entourage. He’s a threateningly charming fellow and especially effective in disguise as he seeks to infiltrate Nick’s company and steal Nigel’s script ideas.

Fans of musicals will have plenty to enjoy in Something’s Rotten. In just one scene, there’s a tableau with a guitar playing singing nun from Sound of Music on the left, the Phantom of the Opera in the middle, and Peter Surace, who appears as Shylock the Jew, secretly financing the brothers’ efforts, playing the role of the Fiddler on the Roof. References to other musicals are just too many to count and the authors are still trying to figure out how to drop a line or two from Oliver into the mix.

The leads and the chorus of the show are a hard working bunch. I was especially impressed with the antics of Greg Kalafatas as the soothsayer and the resolve of Emily Kristen Morris as brother Nick’s supportive wife, Bea.They all sing well and fans of choreography will be richly rewarded in a show that also leans heavily on percussive tapping. Mathew Croft directs the show and his quartet from the keyboard. Gregg Barnes costumes miraculously come on and off as the cast romps around the magical set of Scott Pask with the lighting by Jeff Croiter.

I watched Something’s Rotten from a seat in the 17th row for the first act and in a seat next to the orchestra pit for the second. Both have advantages. The impact of the staging and the dance scenes are much better out in the house. The words and the effect of the individual actors gets better when you’re closer.

By the way IU grad Abby Bartish is a prominent figure in the cast. Abby is almost six feet tall and the staging uses her height. She’s easy to pick out in the group.

Something’s Rotten at the IU Auditorium plays Wednesday and Thursday, February 27th and 28th. If you’re hearing this review on Thursday, there’s one more chance before the show packs up and moves on.