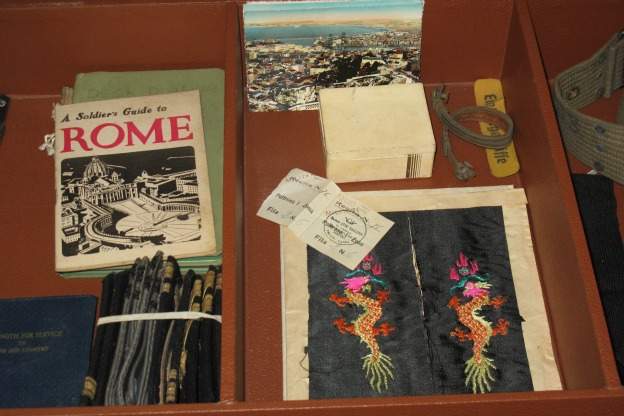 Heading into Terre Haute, Indiana from the east, you have to drive down a long, unmanicured stretch of Wabash Avenue to get downtown. It's not what most people would call the scenic route, but a recent addition to the street view is at least making people slow down a bit as they go by.

James Shepard's mural on the storefront at 1129 Wabash Avenue was commissioned by Terre Haute business owner Brian Mundell, who is in the process of opening the Veterans Memorial Museum of Terre Haute inside the building.

"I picked out a bunch of iconic images," explains Shepard, himself a veteran from the Vietnam era. "The centerpiece is raising the flag on Iwo Jima, which I think everyone knows even young people."

From Iwo Jima to Uncle Sam and a sign for the 38th parallel, the images Shepard has included are the shorthand for a century of American military history, easily read from a passing car.

"So people will say, oh yeah that's World War 2, that's Korea," Shepard speculates, "as opposed to the subtler things they'll see inside the museum, the day-day life, and the humanity of it all."

Up Close And Personal

"It's not all about the front line items, it's not the gory things," Mundell elaborates, inside the building. "It's anything that had to do with the military during that period, whether it's a pack of cigarettes, orâ€¦" he trails off, before reprising, "I've even got condoms from World War 2. So that's the range."

However prosaic, Mundell's focus on personal effects and ephemera is intentional. "What I pride myself on trying to do here, is to honor the average everyday soldier," he explains. "If it opens anyone's eyes to the sacrifice that the veterans had to go through, then I guess I've done my job here."

Unlike the attractions in larger military museums Mundell has visited in Auburn, Vincennes, and Dayton, Ohio, his artifacts are not, for the most part, unique. "I don't have General Patton's sidearm," he concedes. What Mundell does have, though, is stuff that belonged to "the guys who were in the trenches, cooks, mechanics. You know, all those jobs kind of add up; you need all that to fight a war; and that's what I have."

A military history enthusiast with a collection so large he is opening his own museum to house it, it comes as a surprise that Mundell himself-who at 6'3", with a shaved head and stoic expression, looks every bit the soldier-is not a veteran.

An irregular blood sugar reading dashed his attempt to join the Marine Corps Reserves when he was 26. "You know," he shrugs, "it just wasn't meant to be."

Although he didn't get to serve, the native Terre Hautian has been passionate about military history since he was a child. Stories about World War 2 told by a beloved grandfather who served in that conflict fired his imagination. "I still have book reports on Pearl Harbor from 4th grade," Mundell admits.

Now 43, the history's buff foray into collecting went into full gear after a trip to Normandy, for the 60th anniversary of the D-Day invasion, in 2004.

To feed what he concedes is a collecting "addiction", Mundell scours estate auctions and places ads in newspapers-not just locally but even in Florida, whenever he goes down to visit his parents.

His finds range from such day-to-day items as a wooden ration box for Hershey's bars to the more unusual-he has the World War 1 uniform, dog tags, and photograph of an African-American soldier, for example. Whenever possible, Mundell combines everything that belonged to a particular soldier with biographical research about him or her, sometimes learning more about the veteran's service than even family members know.

But it's not every history buff who's able to manifest his interests in a brick-and-mortar museum.

In retrospect, even Mundell is slightly incredulous about how it happened. Although friends admiring his growing arsenal of military artifacts would suggest he open a museum , the collectorwho since 1995 has owned Terre Haute's Superior Kitchen and Bath, along with some adjacent real estate on Wabash Avenue-gave the idea only passing consideration until a lease on one of his buildings fell through at the last moment.

And so, since early2011, Mundell has been transforming the front 1000 square feet of 1129 Wabash Avenue into a museum that he hopes to open to the public by Veterans Day 2012.

Since it's next door to his cabinet business, on slow days he can come by and work on it, building a replica of a trench with donated barnwood, hanging corrugated tin to simulate a Quonset hut for another display.

It's a fun project to share with his twelve-year-old son, and as local business owners have gotten wind of Mundell's largely self-financed project, they've also partnered with him. Along with the personal collections that keep rolling in, the drywall for the museum's interior was donated, and the lighting fixtures made available at a discount. The Marine Corps League donated five thousand dollars, and the American Legion Post 104, $5001.

Brian chuckles that the friendly rivalry is "just fine with him"; it's helping keep the museum's planned Veterans' Day opening in sight.