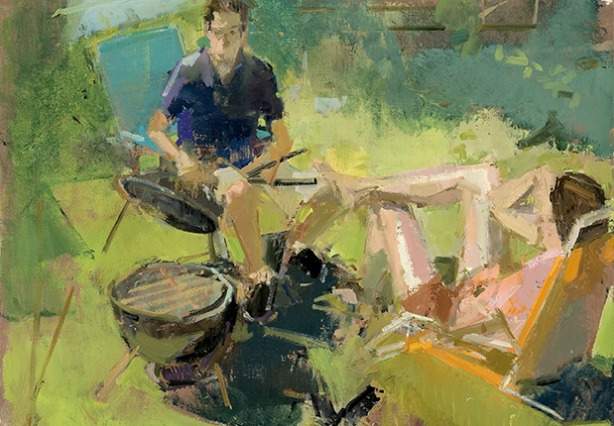 When painter Tim Kennedy started mentally sifting through the paintings he would want to include in the show Small is Big at Indiana University's Grunwald Gallery, he made the decision that nothing could be larger than 16 by 20 inches. And of course, there are plenty of paintings that parameter might include.

"But the thought was," Kennedy explained, "that the artists would have some sort of perceptual and responsive connection to things."

The connection to things means that Small is Big comprises still-lifes, figures, and landscapes. The idea that small paintings might in some way provide a more direct vehicle for response to these things is rooted in the historical use of the small canvas in the field. An artist hoping to register immediate impressions of the landscape would need something portable.

The subtext of the small format, then, includes the idea that the artist "has an intimate connection with what [s/he's] looking at; that it would be truthful, and that [s/he's] recording nature in some way."

I don't typically invent visual situations.Â I try to respond to what's there. I find that the way objects and space and light come together in front of me is infinitely fascinating and thrilling.

IU painting professor Eve Mansdorf does use the small format to paint outdoors, but not just because of its convenience.Â "Because if I really wanted to bring a big canvas outdoors, I would," she laughs.

"There's something about the way a small painting is all there at once that's very intriguing to me.Â It's just a different way of visually exploring things that I'm interested in and getting at things in a more shorthand way."

This dogged determination to "get at things" unites the five painters grouped in Small is Big.

But it's not so much a desire to make a so-called accurate representation of something as it is to figure out what you're really seeing.

"Part of the process for me is to turn off the brain switch and try to see what's really in front of my eyes," explains Boston-based painter Catherine Kehoe, who has six paintings in the show, including several unrelenting self-portraits.

"I don't typically invent visual situations," says Kehoe.Â "I try to respond to what's there. I find the way objects and space and light come together in front of me to beÂ infinitely fascinating and thrilling."

"A certain kind of observational painting where you're breaking down what you're seeing and reconfiguring it is a very dynamic thing to do," Mansdorf agrees.Â "While I hope I get good paintings out of it, I'm very addicted to doing it."

Apprehending and shaking down retinal reality is such a compulsion for these painters, you might imagine that they were hopelessly literal. But there's an alchemical aspect to their endeavor.

More Than The Sum Of The Parts

"There's a statement by [Austrian expressionist painter] Oskar Kokoschka that women and artists can make life," asserts Pennsylvania-based painter EM Saniga; "and for me, that's what art is about, because these [paintings] are living things, they have a life of their own."

Saniga is represented in Small is Big by his mysterious rural scenes and eccentric still-lifes, whose thick moodiness conveys the metaphysical life of the scene just as readily as its objective reality. Their tone recalls George Inness, Albert Pinkham Ryder, the pre-Raphaelites. Though inspired by rural Pennsylvania, Saniga's world is a sort of dreamscape, a place remembered, a zone between Earth and what's beyond.

Life is what happens every day and we paint that, rather than any big grand subjects, or sociology, or popular culture. It's more intimate in that sense.

"Somebody asked me about [my paintings' reference to the spiritual] in an interview once," Saniga recalls.Â "They asked, 'Are you in awe of life?' And certainly I am.Â What I'm painting I'm in awe of.Â If that's spirituality, it's because of that.Â I do love life, and what's out there, good and bad."

All Things Great And Small

Ernie Saniga's all-encompassing affection for "what's out there" includes such unprepossessing subjects as a big purple country sausage he'd found at the farmer's market one morning.Â Choosing to represent such humble objects reminds you that the show is called "Small is Big"-a sort of assertion that the generally overlooked might well be important.

"You're always trying to see things fresh," Mansdorf offers, by way of explanation for some of the odd and even anti-picturesque imagery in these paintings. "So you might paint something someone else might consider unpaintable."

"I think if you quiet yourself down enough," show curator Kennedy adds, "you can find the miraculous in things that are very ordinary."

Kennedy's own fondness for the homely, quirky object is equally evident hereone tiny still-life represents crab claws and acorn caps, for example, things you pick up on a walk and put in your pocket.

"Life is what happens every day and we paint that," states Saniga, "rather than any grand subjects, or sociology, or popular culture. It's more intimate in that sense."

Admittedly, the intimacy of their enterprise is matched by the small segment of the contemporary art world these artists representa fact that artists of Small is Big meet with nonchalance.

"Of all the stuff we're making today, this is what's going to endure," Saniga avers. "It's not what is making the headlines, but that's ok!"

The language of painting is something that does not become obsolete, Mansdorf concurs. She refers to a museum experience Catherine Kehoe had shared, about staring at a Rembrandt self-portrait and seeing it stare back at her.Â Time collapses, and "you're having this immediate conversation with someone long dead," Mansdorf explains.Â "That's really a miraculous thing."

"You go to a great painter, and you feel that person. It's some way of communicating.Â It's magic, for lack of a better term."

These small, quiet paintings that invite you to approach them, appeal to your sense of touch with their visible brushstrokes, and disarm you with familiar imagery offer passage into a centuries-old tradition of expressiona deceptively small portal into the vastness of human experience.