Many A Slip 'Twixt the Cup And The Lip 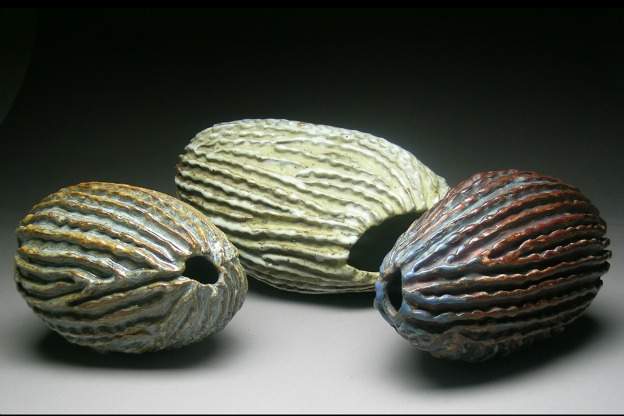 Over the years, the Local Clay Potters Guild Annual Holiday Show and Sale has taken its place among the flagship events on Bloomington's robust arts and culture calendar. This year's show, being held Friday and Saturday at St. Mark's Methodist Church in Bloomington, marks the event's 16th year. But this well-attended showcase of functional, decorative, and sculptural ceramic objects-like a clay pot itself-doesn't just emerge from the earth.

We have inherited this very rich and beautiful tradition, that we are able to bring forth out of the earth through our hands.

"It's between 26 to 30 times from a ball of clay to someone taking it off my shelf," states potter Adam Egenolf, who has counted.Â From receiving the delivery of clay, to wedging it, to forming the piece, to bisquing it, to glazing it, to removing it from the kiln, to packing and loading it for a show, there are multiple steps that can turn one pound (or ton) of clay into 26.

Must Be Able To Lift 50 Pounds (And Travel Weekends)

The physical toll of the work is such that potter Kris Busch, who'll also be exhibiting at the Local Clay show, barters her work for services from a massage therapist.Â The rigors of creating ceramic art are compounded by the potter's second job, of marketing and selling the workmuch of which is done in person at shows around the country.Â Egenolf claims that he travels 20-25,000 miles a year to show his pottery.

The founders of the Local Clay Show were motivated to minimize that time on the road. "If we could build a successful show," recalls Karen Green Stone, Guild president, "people might be able to drop a traveling show, so they could stay closer to home."

Back in 1997, after a very successful show of local ceramics at the John Waldron Arts Center, Green Stone, who'd been heavily involved with Colorado Potters Guild, partnered with potters Tina Wenta and Susan Snyder to get a similar group started in Bloomington.

I mean, people fondle the pots.Â They hold them to their body and they're touching them. It's really sensual.

Since then, the Local Clay show has outgrown Harmony School, and there's a lot more buy-in on the organizational level by the 23 participating artists, all of whom live within a 50-mile radius of Bloomington.Â Â There's a web person, for example,Â poster designer, envelope stuffers, and yard-sign installers.Â "It's not a spectator sport," avers Green Stone.Â "Everyone's in the arena for this."

This year's show will fill all of the spaces in St. Mark's Methodist Church, and include a sculptural ceramics area set up like a traditional gallery. Although there will be islands where a single artist is featured, the rest of the space will co-mingle work by various artists, so the customer has to go "hunting and gathering."

There is an area where shoppers can set their pots to be watched while shopping for others. But some customers are reluctant to let go of the ones they've chosen, Green Stone has noticed.Â "I mean, people fondle the pots.Â They hold them to their body and they're touching them. It's really sensual; it's really beautiful."

What is it about ceramic objects that seems so familiar?

"Last year, some functional pieces were found in a cave in China that were 20,000 years old," notes Green Stone. "I think that there's something in each of usin our DNAwe have inherited this very rich and beautiful tradition, that we are able to bring forth out of the earth through our hands."

Creativity At Its Most Primal

Working with materials from deep inside the earth and subjecting them to the heat of a volcano, is a primal creative process.Â Egenolf's glazing technique, for example, reproduces and improvises on natural geological processes.Â "I put in ingredients that in their natural form, down in the earth, are crystals," he explains.Â "Those two ingredientszinc and silica melt down at around 2300 degrees, and then I lower the kiln to around 2000 degrees, where those molecules wrap around each other and start reforming crystals, which is what they were originally."

Just like in nature, there's a lot of unpredictability.

The tenuousness of the craft extends to its raw materials, which occasionally become unavailable, without warning.Â Albany Slip, for example, was commonly used for jugs and other earthenware pots beginning in the early1800s.Â When the clay was used as a a glaze, it created a rich brown glassy surface, ideal for the interiors of vessels.Â If you imagine the classic whiskey jug, it's glazed with Albany Slip.Â When the mine where the clay was sourced was closed in 1986, it sent potters scrambling for substitutes, most of which compare unfavorably to the original.

The Comfort Of Ritual

From materials, to technique, to the vagaries of popular taste, the potter's life is rife with uncertainty.Â But ritual has served as humanity's time-honored antidote to the vast unknown. And pottery has long held a ritualistic function.

Just think of your daily cup of coffee.

"It's probably the most basic form, the form that every ceramic artist has ever made," asserts Egenolf, who's always got plenty of mugs for sale at shows.Â Customers "seek it out because they get to have it with their moment. That one object to me embodies how personalized you can get with a piece of clay."