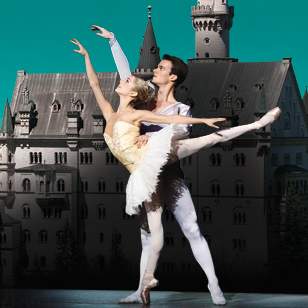 The ballet with music of Tchaikovsky tells the story of Princess Aurora who cursed by the wicked fairy Carabosse but guarded from death by the Lilac Fairy's gift pricks her finger on her 16th birthday and falls into an enchanted sleep until she's awakened by the kiss of a prince.

Duryea began dancing early. "I was just two, so I can't even remember when I haven't danced." Tyndall like most male dancers came to ballet a bit later. "I took my very first ballet when I was fourteen years old. Up until then, I was a travel-hockey player. That summer I went away to a ballet summer intensive and fell in love with it."

Both of the dancers focused on the difficulty of presenting different aspects of their characters. "The Princess is almost two different characters" says Duryea. In one act she's sort of the vision that entices the Prince to come and wake her up. She's ethereal and subdued. Then in the next, she's matured, she's fallen in love. It's her wedding celebration. Finding and embodying the difference is the challenge."

Tyndall offers a similar account of his part. "Both my acts are also very different. In one, the Prince is all melancholic. He's sure that there is no perfect someone for him, but then there's the vision, a lovely dance and the kiss that wakes the Princess. So that covers a lot of dramatic ground. Then in the next act, it's totally different as we give ourselves up to a joyful dance."

Much of the original choreography by Marius Petipa for The Sleeping Beauty has been passed down over the years, but Michael Vernon chair of the Jacobs School Ballet Department has created some new choreography for the IU production.

The set, designed by C. David Higgins, is the last created before his retirement