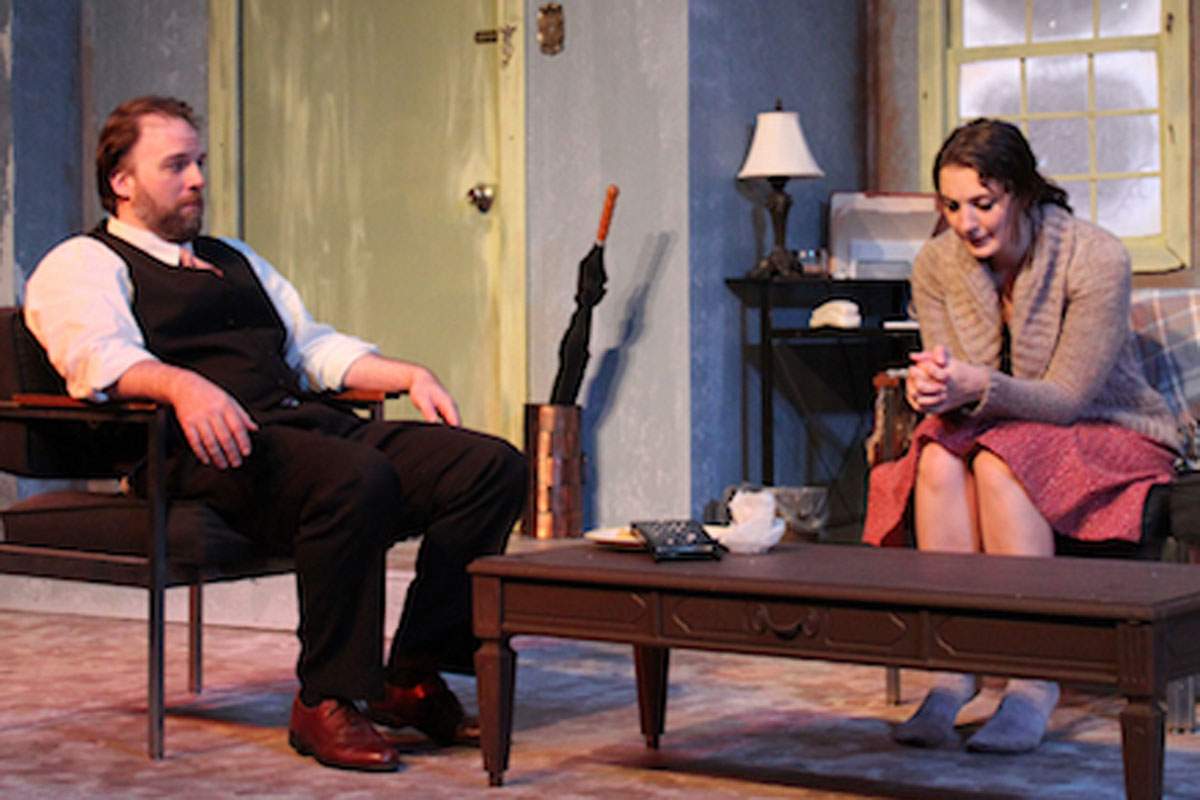 Skylight by David Hare at the Shawnee Theatre is a fascinating love story with a curious beginning and an almost but not quite baffling end.

Kyra Hollis, Elodie Senetra is a school teacher living in a rundown London flat.  Home from a day at school she's visited by Edward Sergeant, Andy Fleischer. Edward is nineteen and he's taking a gap year before going on to a job or university. Until three years ago Kyra was a regular member of Andy's home and since she left without a word, he's been feeling sad and abandoned. There's a bit of mystery about the whole affair and it's well played by the two actors.

No sooner does Edward leave, but the bell rings again and his father Tom Sergeant, Adam Michael Lewis arrives. He and Kyra had a six year long affair that ended abruptly when he left her letters out for his wife to find. Like Edward, Tom feels abandoned, but expresses it mostly with anger.  His wife has died and he wants Kyra back. Tom angrily criticizes her flat, and belittles her teaching job.

Tom's criticism ranges far and wide. Ignoring the fact that she worked happily with him in his business, he accuses Kyra of looking down on businessmen. He harangues her about political issues and even brings the religion of the Moonie's in as part of his critique. It's quite a set of speeches and Kyra gets into the arguments with a certain dogged attitude.

Meanwhile Kyra's actually cooking spaghetti and making the sauce. Tom can't resist his angry criticism even in the kitchen. He argues with her about the order of her sauce making and practically refuses to grate the inexpensive cheese that she's using.

In spite of their three years apart and all of their arguing, it's clear that there's still physical passion between the two and they do make love. But the next morning the old arguments come out again and it becomes clear that Kyra has moved on in her life and her thinking while Tom has not. She helps dress him up for a day at the office and tells him not to come back.

Just when I thought the play is over, the bell rang again and it was Tom's son Edward. This time he's brought a sumptuous breakfast and Kyra clearly enjoys sharing it with him.

One of the pleasure of the Shawnee Theatre is the opportunity to see actors play more than one part. In The Sweetest Swing in Baseball Elodie Senetra was a depressed artist, while Adam Michael Lewis was a thoughtful murderer and Andy Fleisher a recovering alcoholic.

Skylight is a really interesting and involving character study. Kyra and perhaps Edward seem to come out on top, but theirs is far from a total victory. Taut direction is by Tommy Novak with the nicely run down flat by Colt Frank and costumes by Molly Mason.

Coming next at Shawnee is Gutenberg! The Musical! By Scott Brown and Anthony King, July 21-24.