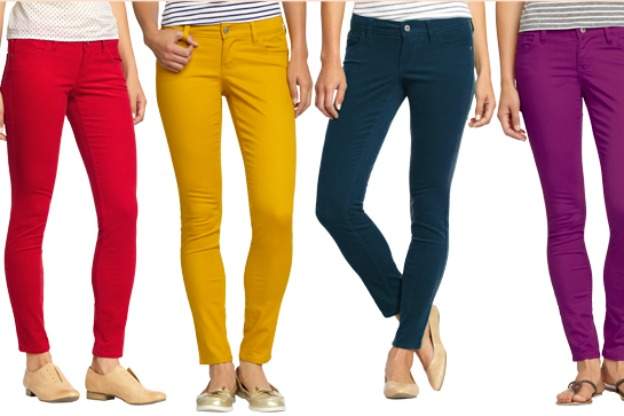 Indiana University's Themester offers a semester's worth of coordinated programming-classes, lectures, films, and exhibitions exploring a broad theme. Themester 2013 takes on the idea of "Connectedness: Networks In A Complex World".

On a college campus, it's easy to observe a social network in action.Â It also becomes clear that there is some sort of unwritten code about how members of this group dress. Many people tend to dress alike for a particular period of time, establishing a trend.

I decided to investigate the social forces driving one inexorable fashion trend: skinny jeans.Â One young woman I observed sporting the look reported that she was wearing faded black Michael Kors skinny jeans that she nabbed at a thrift shop. Her friend was also donning skinny jeans â€“ this time, classic blue, from New York & Company.

Deb Christiansen, Director of Undergraduate Studies & Senior Lecturer, Apparel Merchandising & Fashion Design, confirms that tapered pants â€“ from slightly tapered to skintight â€“ have become the norm in the past decade. This is true regardless of size range or body type, she asserts, and this particular trend "has really hit in these past two or three years with the legging phenomenon."

"There were a lot of straight-leg, wide-leg, boot-cut [pants]," Christiansen explains, "so this was the way to make a new silhouette. I think there are a number of cultural factors at work. Claude Levi-Strauss talked about us being a hot society â€“ we demand change; we want change all the time. So, the [fashion] industry needs to change â€“ how is it going to sell you something, unless it gives you something different?" Fashion is art, Christiansen concedes, but more precisely, it's "creativity with a commercial purpose."

For women on campus,Â the "new silhouette" is the only one.

"Once I wore bell bottoms in high school," one woman reported, "and I felt very uncomfortable because everyone else was wearing skinny jeansâ€¦Then I bought skinny jeans, and I think I've worn them ever since."

Another was adamant: "Only skinny jeans. My eyes have grown accustomed to the way I look, and now I think other cuts look stupid on me."

Once I wore bell bottoms in high school, and I felt very uncomfortable because everyone else was wearing skinny jeans. Then I bought skinny jeans, and I think I've worn them ever since.

Still another skinny jeans-wearer claimed practical reasons for her choice: "I just don't like the feel of flared jeansâ€¦ and they get stuck in bike pedals."

The Demand For Change

Vincent Hendricks, a philosophy professor at the University of Copenhagen who studies how information technology affects trends, notes, "Trends cannot be kept alive unless they're fed at a regular basis, with new products, or new addenda â€“ otherwise, they tend to abate." In other words, when it comes to the commercial world, change sells.

Hendricks, who lectured on the IU-Bloomington campus in September as part of Themester 2013, says that this need to change means that often, those who have the power to create and control trends, such as fashion designers, "usually have to throw new information into the chamber to get [the trend] not to abate." (Think of the iPhone.)

This leads one to the question â€“ when young women at IU (and across the nation) started wearing leggings or skinny jeans, did they wear them because they truly thought the style suited them? Or were they just responding to "new information being thrown into the chamber"?

Christiansen would err on the side of the latter. She says that although fashion blogs may advise people to wear "whatever's right for your body," this isn't what people typically do. "We can look around us and see that there are people who aren't necessarily wearing exactly what's right for their body, because they believe that what's available to them, and what's â€˜in', or what's â€˜right' â€“ the trend of the moment â€“ is the skinny jean, the legging, the jegging. I think in many ways, even those of us who think we're very individualistic in our choices are less individualistic than we think we are."

Trends cannot be kept alive unless they're fed at a regular basis, with new products, or new addenda â€“ otherwise, they tend to abate.

According to Hendricks, there are

certain ways in which we can be collectively dense, but individually rational. There are two distinct sources of information for us. One is whatever your senses will tell you, or your extended senses (things like computers or the Hubble telescope). But sometimes, that's simply not enough for you to make a qualified decision â€“ so, then you look at the other source, namely, what are other people doing? That's called social proof, whenever you, when in doubt, look to what others are doing, and then imitate or adopt their mode of behavior in order to solve the problem in the best way. There are many ways in which our collective behavior is actually determined by this social proof affair â€“ so, sometimes we'll do what's not optimal, just to be on par with everybody else.

Social proof is so inherent to our nature that it leaves us unsure as to the origin of our own tastes. One woman I spoke with underlined this point: