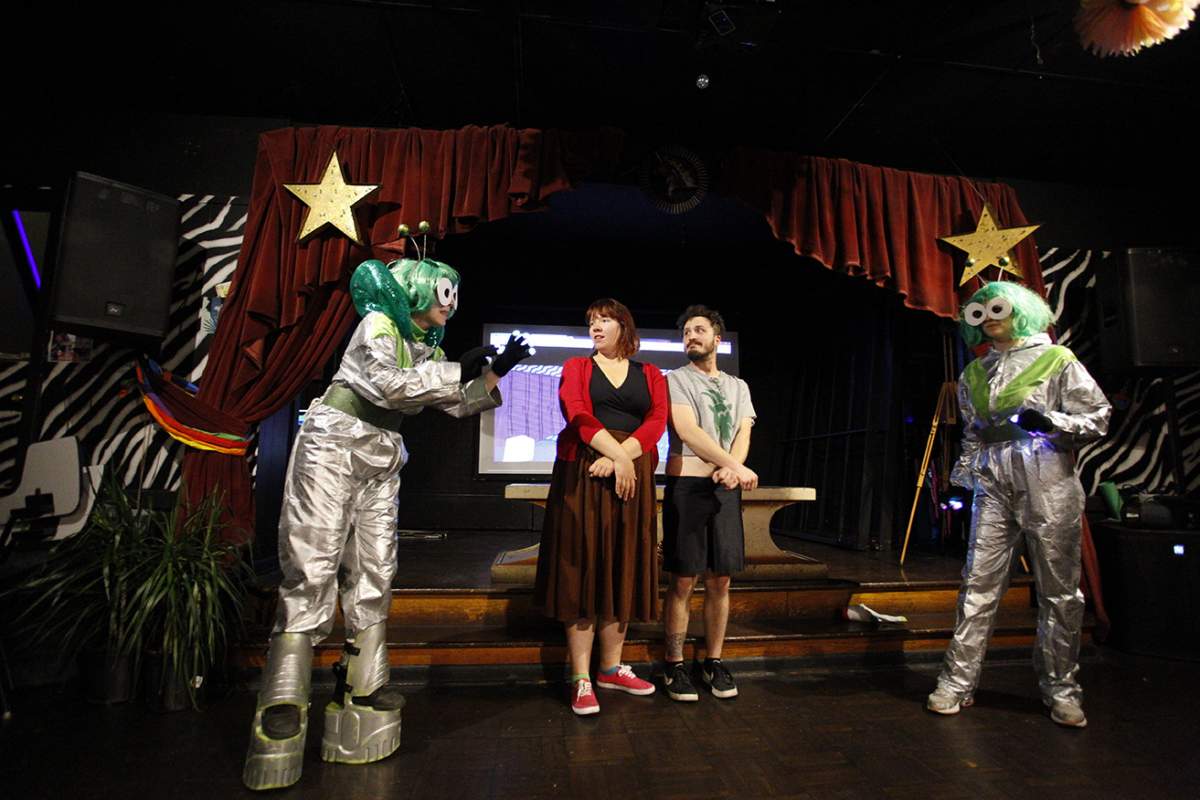 "As teens and college kids, we came up through DIY and punk scenes, and because of that we always thought that skill or having the technically appropriate venue is never going to be a barrier to making art," Bethy explains.

They write original comedies (Bethy and Michael Barton serve as head writers),Â make all theÂ costumes, props and sets, and doÂ their own sound design, stage production and lighting.

Aliens from Planet ClaireÂ descend on Small Town, USA, andÂ attempt to usurp local power by swapping brains withÂ theÂ homecoming queen frontrunner, Bobby Sue. And just for kicks they swap the brain of Billy,Â star football player, with the school mascot the goat. And the aliens aren't the only ones trying to upseat Bobby Sue and Billy, the most popular kids in school.

Meanwhile, undercover FBI agent agent Lloyd Carruthers infiltrates the student populace to sniff out an invasion of another sort: the Reds!Â Coach Forrester gets tough on the kids and primes them on the most important game of their lives against the Big City Rivals. A beatnik blathers. The school nurse, ahem doctor, just wants some respect around here.Â And the PTAÂ madam president gets royally wasted.

In the same way that we want to play with cliches and tropes of genre, it's important for us to question those assumed, 'essential' aspects of identity.

"I wanted to do a '50s sci-fi parody. I was watching a lot of Mystery Science Theater 3000 and I liked the terrible, stilted acting. I liked all the theremin. And I liked the silhouette of a poodle skirt," says "Trading Faces" head writer Bethy Squires.

With an arsenal of influences-which rangeÂ from Shakespeare and Sophocles to the Simpsons, French playwrightsÂ Samuel Beckett and Jean GenetÂ toÂ RuPaul and John Waters-the group blends deft social satire and campy pop culture and, all the while, uses the stageÂ to question socially scripted roles.

"Drag and gender play and identity are important to our company and its workÂ because of the number of queer and non-binary members we have. In the same way that we want to play with cliches and tropes of genre, it's important for us to question those assumed, 'essential' aspects of identity."

Sitcom Theatre has emerged from the underground to remind us, once again, that the world is a stage and we are merely players.Â And it's funny as all hell.

Find out more about Sitcom Theatre and upcoming performances at their website:Â http://sitcomtheatre.com.

Special thanks to Dave Walter/CATS for audio of the original performance of "Trading Faces."