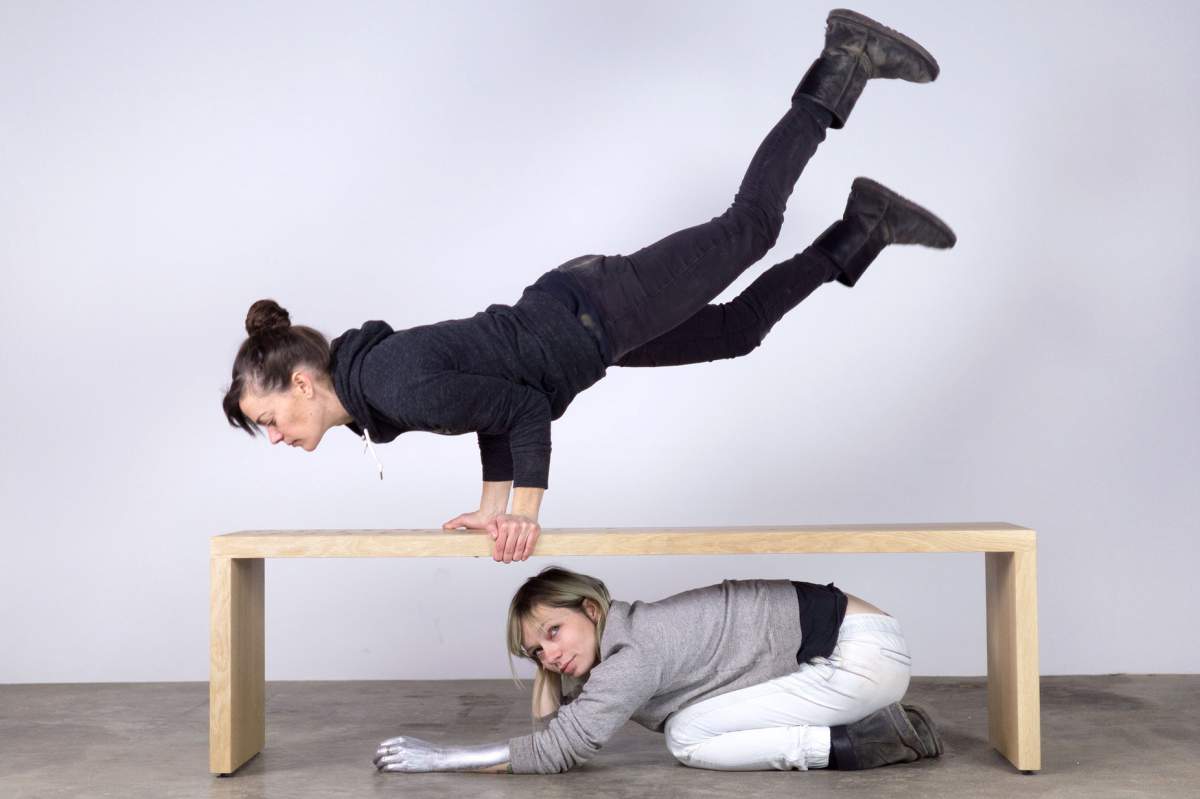 In a 4500-square-foot warehouse tucked away on the west side of Bloomington sits the workshop of Siosi Design. Run by the design and woodworking team of Ivy Siosi and Audi Culver, Siosi Design specializes in handmade, mid-century modern-inspired furniture, from simple benches and stools, to grand dining tables and entire bars.

"I think the focus is on making something functional and beautiful," said Audi Culver, one of the co-owners of the company, "The goal is simplicity and clean lines. We're certainly Danish inspired, mid-century modern inspired. But we also hope that we're creating our own voice within this realm. And that's our goal, is to take cues from the past and to add our own little tweaks to it."

It's a perfectly pristine shop, filled with all of the usual suspects in a wood shop: a table saw, a jointer, a planer, and other woodworking and welding tools. And of course, there are the stacks of wood, waiting to be transformed into these creations.

Ambrosia maple gets its name from the Ambrosia Beetle, which burrows into the maple and lays its eggs. "As the larva hatches, it creates this reaction," said Siosi. "It's actually like a fungus reaction. It creates blues and grays in a striated pattern. And it doesn't destroy the integrity of the wood, it's just a nice coloration." These dynamic blue-grays show up in Siosi Design's tabletops, islands, and benches.

Audi and Ivy also like to have fun in their shop. Off to one side, you'll find a couple of skateboards, and some motorbikes (including one that Ivy is rebuilding from the ground up), as well as a basketball hoop. To the other side, there's a space that they've converted into a photography studio.

Siosi Design is a two-woman operation. Everything from the design, to the build process, to even the marketing is done by SiosiÂ and Culver. Ivy Siosi is the chief designer of the two. She has a background in studio art: mostly printmaking and painting. Audi's background is also in fine arts. She has an M.F.A. from Indiana University in Photography-that's where the photography studio comes in.

Audi's photographs of Ivy's designs, showcased on their Instagram page, have become the backbone of Siosi Design's marketing strategy. "We're both artists, so marketing's very new to us," said Culver. "It's very natural with Instagram to photograph our lifestyle, and our process and our finished pieces."

On their Instagram page, you'll see images of their work, including kitchen islands with Ambrosia maple tops, hand-carved hunting bows made out of the bright yellow wood known as osage, or Japanese-inspired walnut slab coffee tables, with a live edge to make it look like it taken straight from the tree.

But alongside this furniture, you'll also see images of Audi and Ivy riding motorcycles and skateboards, and, of course, their trusted shop dog named Arrow.

"It's our lifestyle, but it's part of the overall branding," Siosi said. "Because of how media works, and social outreach, our whole story becomes our brand."

"Our lifestyle is our company, is our work, is our art, is everything," Culver added.

Siosi Design's whole story is perhaps atypical for your average professional woodworker, but could be seen as a common story in this DIY age. After Audi finished her MFA in photography at IU about 4 years ago, the couple found themselves at a watershed moment. They knew they wanted to work together, but were unsure of which direction to take.

They settled on building furniture, and started creating a shop. "We had saved our money for a year. I had sold some of my pieces at my thesis show," said Culver. "We had a tiny amount of money to work with. We bought the equipment. We read some books. We watched some YouTube, and went for it."

Besides an 8-week woodworking course that Audi took, and Ivy's background in some home-building, neither were trained in woodworking.Â Because of their background in fine arts, the designing and the building came easy to them. But as far as woodworking goes, the two were mostly self-taught.

"The best way to do something is to just do it," said Siosi. "We really had a lot of fun learning how to do it. We kinda started from the ground up. We did everything the hard way in the beginning. And as we've learned more and been able to buy more equipment, our craft has just gotten better and better, and we've grown. And I think our minds have morphed into true woodworking minds."

"A lot of times, things like routers are built for larger hands," Culver said. "But it's never actually an issue."

"Our biggest issue is going to Lowes and feeling the weight of misogyny," Siosi added. "That's a lot heavier than any piece of wood."

To counter this misogyny, Siosi and Culver like to play a little game at hardware stores, where they channel the character Ron Swanson from the television series Parks and Recreation (played by real-life woodworker Nick Offerman). There's a scene in the show when Ron goes to a hardware store and is approached by a helpful employee. Ron looks at the employee and bluntlyÂ says, "I know more than you." Culver and Siosi say this phrase to themselves all the time.

For the most part though, the attitudes they encounter aren't overtly misogynistic. According to Audi, most of the older men who they encounter at trade shows, and various hardware stores around town are impressed that they're doing it and making it work.

And, as far as quality goes, it's not hard to be impressed byÂ Siosi Design's work.

Right now, Siosi Design'sÂ clientele is mostly young professionals trying to upgrade their broken IKEA furniture with something a little more local and handcrafted. But they also have some more high profile clients. For instance, if you've stopped by Upland Brewery's new "Wood Shop" in downtown Bloomington, you've likely seen Siosi Design's handiwork. SiosiÂ and Culver designed, built, and installed the wooden bar, as well as the oak door right next to the bar.

"We made the bathroom door and we made it tactile," said Siosi, "so as people used it, you could feel it and feel the wear after a while."

The detail work on this door has inspired Siosi Design's latest line of furniture that they're calling Tactile. "The aesthetic idea is: the structure is very, very simple," said Culver. "It's really all about these detail elements."

As they look into the future of Siosi Design, Ivy and Audi have considered expanding their operation.

"I can't wait until I become a local employer," Culver said. "That's the goal. We just need to be a little busier. We were really close at one point where we almost needed someone, but then one job falls through, and you're like 'Ok, well I'm glad I didn't hire anyone.'"

So for now, it will remain a two-woman operation. Which is perfectly fine for them.

Siosi Design already consciously blurs the line between lifestyle and work-and art and craft. But removing traditional boundaries is natural for the couple, who are notÂ only business partners, but life partners as well.