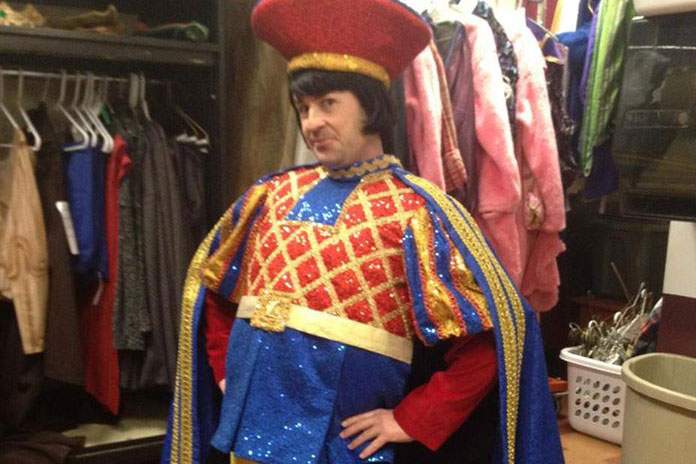 This year, The Cardinal Stage Company's midwinter gift to the area is Shrek the Musical. The show draws on William Steig's book about a lovable ogre and the DreamWorks animated movie. Performances run through January 3rd on the stage of Bloomington's Buskirk-Chumley Theater.

The production is directed by Cardinal founder Randy White with choreography by Dane Buzzell in C. David Higgins' sets is a huge undertaking. The twenty-seven cast members play sixty-one parts in Aja Bell's colorful costumes. Right in the middle of the action, there's music director Robert Cruz with his twelve piece orchestra.

John Gurdian was delightful as the gruff, but sensitive ogre Shrek…about as charming a green monster as you could want. Emily Shultheis was delightful as the fiery haired, Princess Fiona. Their courtship in "I Think I Got You Beat," a memorable bonding through a contest of percussive gaseous bodily effluences, was great fun. Nathan Robbins was Shrek's smart-alecky donkey sidekick. Jason Bowen made a very funny villain as the knee walking Lord Farquaad. Singer Jenn Cristy was the warmly dramatic voice of the fire breathing dragon.

Although Shrek … does have a positive message about not trusting stereotypes and there is a basic monster meets girl, loses girl, finds monster plot…much of the fun of the show is simply sorting out all of the nicely costumed and dramatized figures from the fairy tales. There are dozens of them and each member of the talented cast gets a brief showcase.

Performances of the Cardinal Stage Company's Shrek the Musical continue in the Buskirk Chumley Theatre through January 3. You can find an interview with John Gurdian and Jason Bowen on our web site at WFIU.ORG/arts