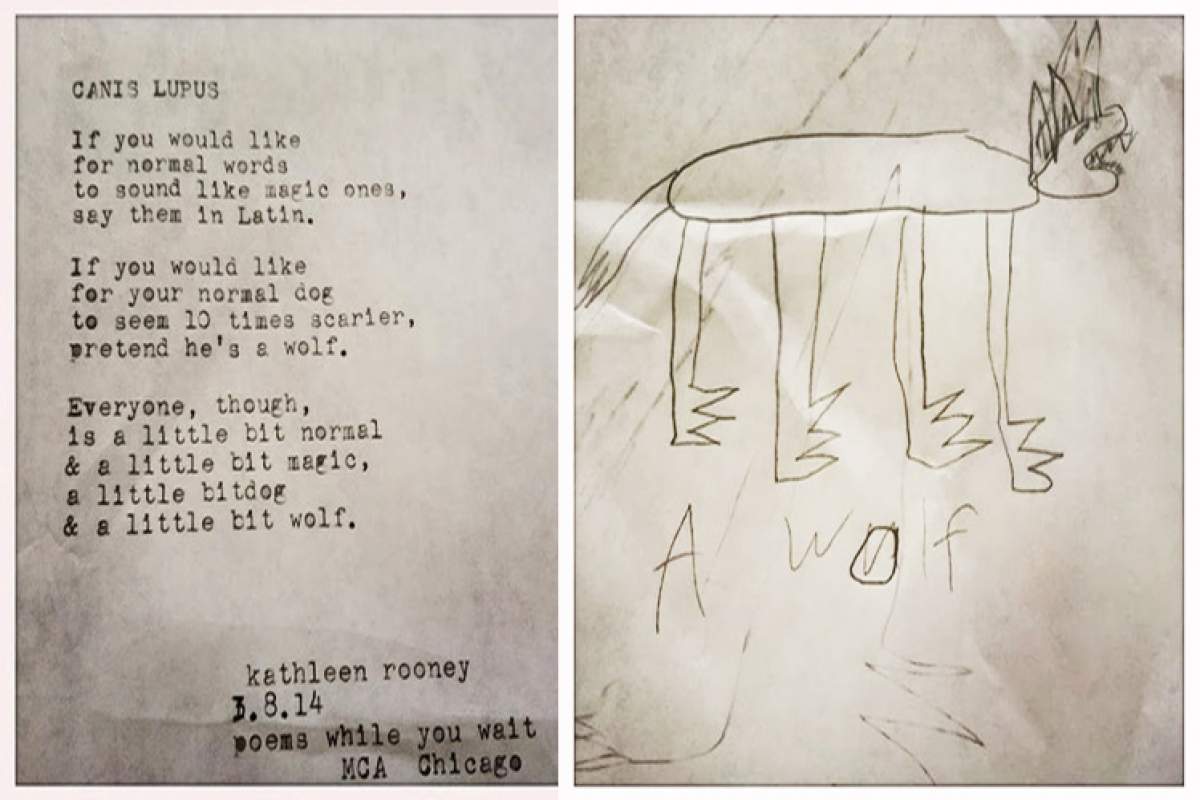 Earlier this spring,  a group of guerilla poets descended on Bloomington with one mission: to prove that, contrary to popular opinion, poetry is alive and fun.

In Soma Coffeehouse downtown, poets Nandi Comer and Stephanie Horvath are busy at work, crafting poems on two noisy old typewriters. A woman walks in and exclaims, "Oh my god! You're writing poems?" Horvath explains, "Tell us anything – any topic, anything you want, and write it down here with your name and your donation amount. It goes to Pages for Prisoners."

For a few hours last March, Horvath and Comer wrote poems for anyone who asked, on topics ranging from the Chinese occupation of Tibet to tomatoes. Other poets were present at the public library, Pourhouse Café, and the Indiana Memorial Union.

This project – called Poems While You Wait – is the brainchild of Kathleen Rooney and a few of her colleagues. Poet Rooney is a professor at DePaul University in Chicago. To get the project going, she says, "I started rounding up poets – friends, people whose work I admired."

Poetry to me is a communicative act. So, Poems While You Wait is a good antidote to what can otherwise be a pretty solitary, unappreciated pursuit.

The way Poems While You Wait works is simple: a few poets get together, gather as many typewriters as they need, go out into the world, and wait for clients. All donations go to an organization of the poets' choice. Rooney says:

"If you're open to that kind of exchange, [like] jazz or improv comedy, then this is great. So many people write articles or are saying, ‘Poetry's dead; nobody reads poetry.' I get why people say that, but I think they're wrong, and I think Poems While You Wait is one way to prove that. Demand exceeds supply of poems with Poems While You Wait, and I think that's a really good statement about poetry and a really good statement about people."

In Soma, Comer is writing a poem on the theme "impossible." It reads: "…Slip war paint under my eyes. I am ready to upturn today's chain link fence and forge a new necklace of forgiving. In another world, in another lifetime, we are embracing our enemies…"

Writing poems on demand is not a new phenomenon. Take this scene from the 1995 film Before Sunrise, in which a homeless man makes this proposal to some passersby: "I would like to make a deal with you. Instead of just asking you for money, I will ask you for a word. Now you give me a word, I will take the word, and I will write a poem with the word inside." Rooney shows this clip in her workshop to demonstrate that the Poems While You Wait project is not novel, but is a time-honored tradition. Far from the romanticized vagabond-poet image in the film, however, Rooney emphasizes that when it comes to Poems While You Wait, poetry is by and for the people.

She says, "The two words we use all the time are "unexpected" and "unpretentious." We don't want to be preachy, like, ‘Oh, ignorant people, you need poetry!' No, not at all – we want to be like, ‘Fun people with a curiosity about life and the world who appreciate interesting stuff, how about a poem?'"

Back in Soma, another woman explains the motivation behind her quirky request: "I just love tomatoes, and I miss them." Comer tells her to get a drink and relax – it could take 20 minutes. When the poem is ready, the client reads it: "My Tomato Love. Sharp red, like a vein. In winter your insides thaw to a raw pink, watery seeds spilling. Fresh, you cluster on the counter. Tight smooth round drums, slice! Your seeds stain my hands, tiny brown pills. I bite right away, like an apple."

Rooney emphasizes, "Poetry to me is a communicative act; it's not a puzzle; it's not a mystery to be solved; it's not something you just do for yourself. So, I think it [Poems While You Wait] can be a good antidote to what can otherwise be a pretty solitary, unappreciated pursuit."

In the coming year, Rooney and her fellow poets plan to tap out short-order poems at locales across the Chicago area, including the Pitchfork Music Festival, the Randolph Street Market, and the Adler Planetarium.