When Sex And War Meet 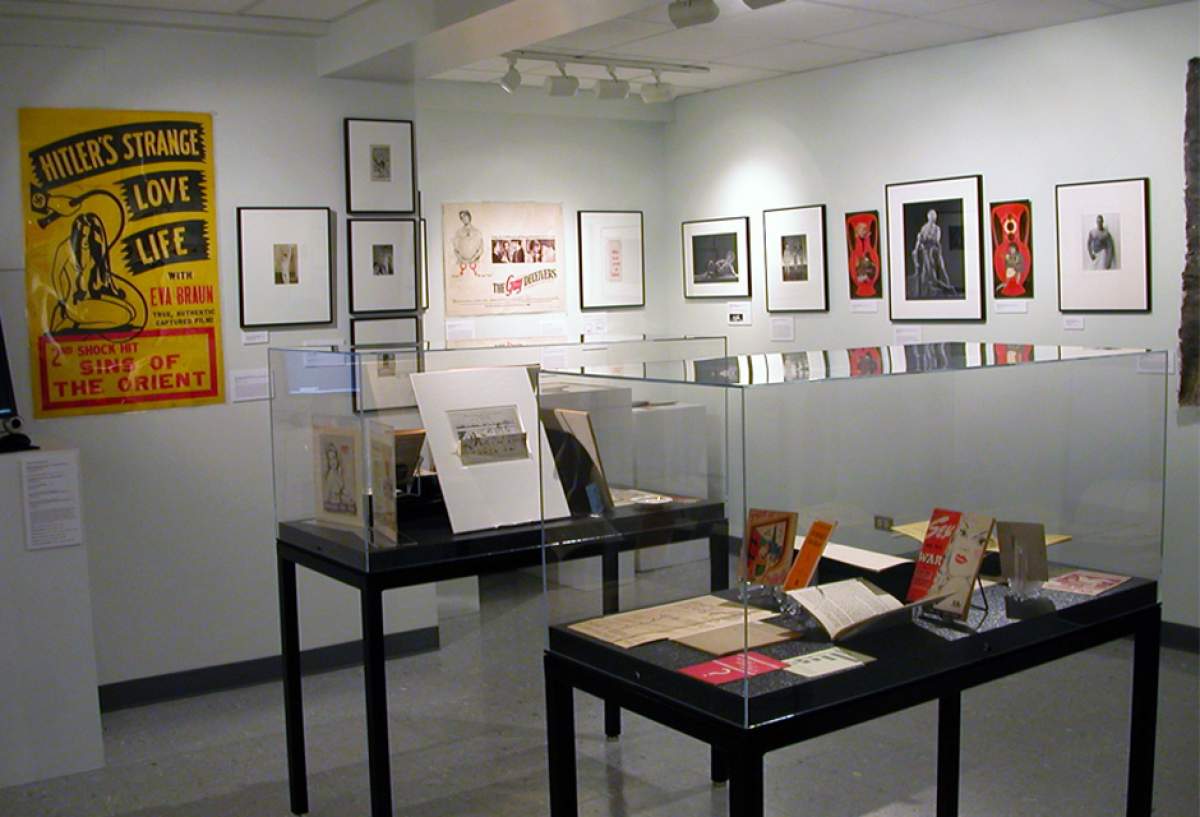 As you step inside the "Love and War" exhibit at the Kinsey Institute's Gallery, your eye is drawn to a large black-and-white photo from the 1940s showing two young men in U.S. Navy uniforms embracing in a passionate kiss.

The photo is usually seen cropped from the waist up, as it was in the 1980s when the activist organization ACT-UP used in it on a T-shirt in their Read My Lips campaign. But the print hanging in the Kinsey gallery is the original version. Below decks, the sailors' flies are open, and they are, so to speak, crossing swords.

The photo of the kissing sailors sums up the theme of "Love and War": Even during wartime, human sexuality throbs under the surface.

The exhibit's more than 100 objects, which come from the Kinsey Institute's permanent collection, are mostly ephemera by anonymous artists. They include such items as wartime postcards of scantily-clad women, homoerotic photos of men in uniform, World War II propaganda leaflets, and pornography from the Civil War era.

Visitors can pick up and leaf through a "Tijuana Bible"-a pocket-sized pornographic comic book from the 1940s. The eight-page, black-and-white comic is a raunchy takeoff on the Cary Grant movie I Was a Male War Bride that leaves nothing to the imagination. The Kinsey Institute owns more than two thousand examples of such comic books in their library.

"They quite often featured movie stars or even comic strip characters," says the exhibit's co-curator, CatherineÂ Johnson-Roehr. "We have some of these featuring Donald Duck, Mickey Mouse. Also, John Dillinger, sports figures of the day-Joe Louis, the boxer."

Three bawdy cartoons from World War II address anxieties American servicemen may have felt about having women in the military. All three cartoons depict the same situation: a woman in a men's bathroom.

One cartoon shows a woman in a Navy uniform standing at a urinal next to the sailor who's looking at her, aghast. She says to him, "Well, what the hell are you staring at?" Another version shows the same scene-woman and man doing their business at urinals-and the woman says to him, "That's a mighty handy little gadget you have there, sailor."

The presence of some one million American soldiers passing through Australia starting in 1941 is the subject of two colored ink drawings. The drawings warn Aussie men that while they are off fighting, the Yanks back in Australia are seducing their women.

The poster's drawing shows a naked, manacled woman on her knees being whipped by a Nazi. But audiences who might have gone to see the movie expecting shocking scenes of sadomasochism would have been disappointed.

"Often the posters [of exploitation movies] had very little relation to the actual film," says Johnson-Roehr. "In this case, this movie was a combination of Nazi atrocities-films that were made at the end of the war of the camps-interspersed with images of Eva Braun in a bathing suit."

Many of the objects speak of the recurrence of humor in wartime, according to the exhibit's co-curator Catherine Johnson-Roehr.

"I think that makes sense," she says, "because war is a very stressful time-for people fighting in a war and also for the people left home who are dealing with the worry and stress during a war. So it seems to make sense that both sex and humor are used to take your mind off that stress."

From the cold war era, a greeting card shows that even the prospect of nuclear war could provide inspiration for sexual humor. The front of the card has a drawing of a mushroom cloud and the words, "What to do in case of fallout..." The inside of the card reads, "Put it back in and take shorter strokes!"

"So," observes Johnson-Roehr, "even nuclear war can be funny."

The photo of the two sailors kissing was staged by a photographer in San Francisco. But it reflected a reality, as Johnson-Roehr learned. She was told by a Vietnam War veteran who attended the exhibit that when he and his lover wanted to hook up, a place aboard ship could always be found.

"Love and War" runs to April 6. The Kinsey Institute Gallery is in Morrison Hall on the third floor. Hours are Monday to Friday, 1:30 p.m to 5:00 p.m. Admission is free. For more information, visit the Kinsey Institute's Web site.