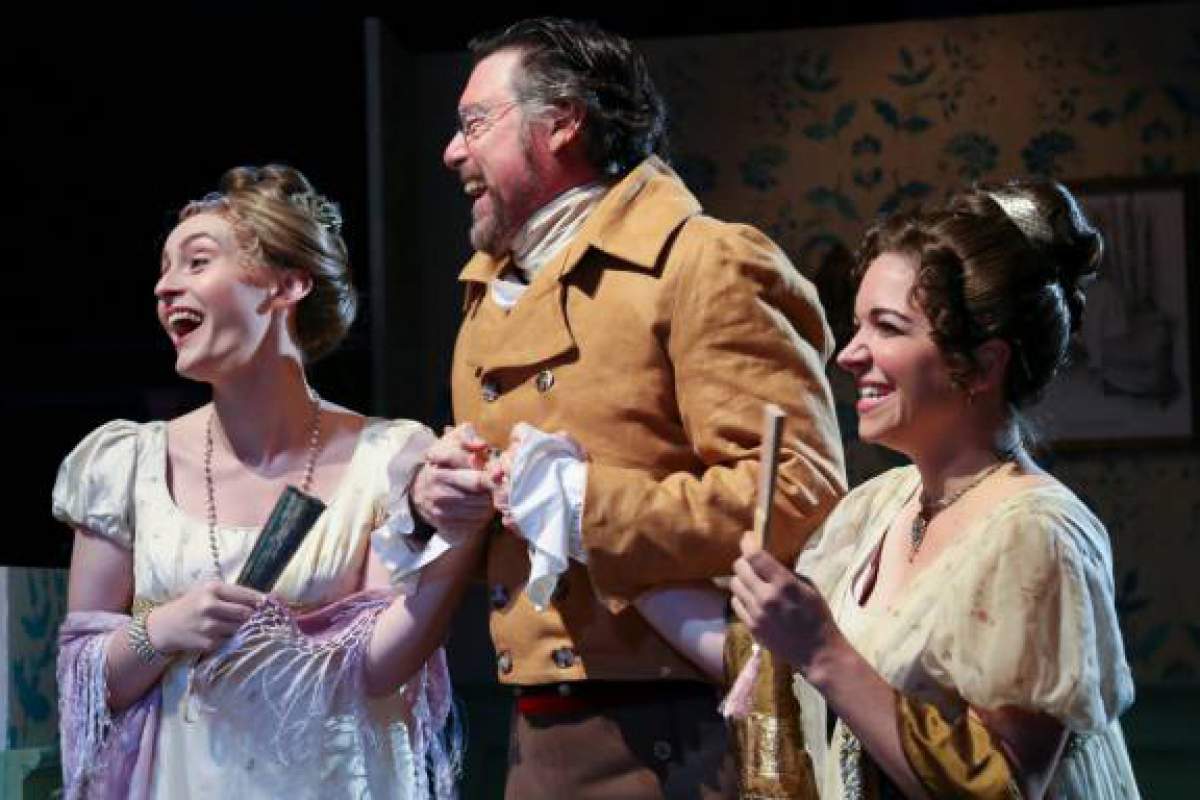 IU's Summer Theatre continues with a lovingly faithful production of Jane Austen's Sense and Sensibility. Critics encourage us to not make too much of the categories, but Amanda Catania as a gracefully correct Elinor and Ashley Dillard as her often less correct and spirited sister Marianne seem to fit the labels. With the death of their father the two along with their mother, played by Maria Walker are thrust out of their estate onto the charity of others and onto the marriage market with only their characters as collateral.

This production focuses much on the silliness of Marianne, first her disastrous flirtation with Willoughby, a charming Jason Craig West and then her more mature choice of the noble Colonel Brandon played with almost painful restraint by Grant Goodman. Elinor's difficult to fathom love for the clumsy Edward Ferrars, shyly played by Nicholas Jenkins is a much quieter passion.

The list of heroes begins with Colonel Brandon, but it includes their generous cousin Sir John Middleton played with gusto by David Kortmeier. Sir John is a bit limited. His estimate of a man has only to do with how good a shot and horseman he is, but his good humor and inventive largess are boundless.  He's ably abetted by Mrs. Jennings, played with earthy delight by Jenny McKnight.

The production of Sense and Sensibility started as a series of quick small scenes, but then moved on to a varied palette of characters and settings. The plot is complicated. It's to the adapter's credit that they've kept most of the details. Although the main characters are always clear, sometimes I did struggle with who was whom in the later scenes.

Part of the fun of the IU production is the contrast in the doubling of roles. Maria Walker appears as the nervously sympathetic mother of Elinor and Marianne and also as the dragon lady mother of Edward and Robert. Katie Horwitz is the cold miserly wife of the girls' half-brother John and later the thoughtful wife of the grudgingly political Mr. Palmer, Zach Decker. Jessica  Schroeder is the boringly appropriate wife of the lively Sir John and the more energetic cousin of Mrs. Jennings, Anne Steele. And don't forget Joey Kelly as the eager servant of the Middletons in the country and the reluctant servant of Mrs. Jennings in London.

Ruben Lucas's scenic design with large period style paintings, decorated wings and period furniture is a wonderful setting for the drama. Coupled with Allen Hahn's lighting and Kate Hershberger's sound it all works very well. The Costumes that look well on everyone, especially the gentleman are by Linda Pisano.

Masterful direction is by Dale McFadden