Making Mischief Of One Kind And Another 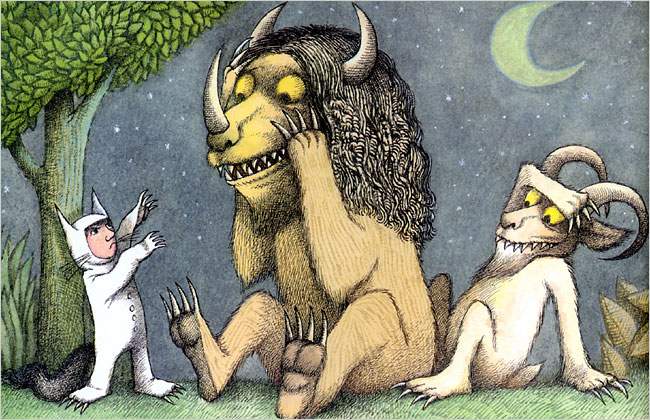 If you know anything about Maurice Sendak (1928-2012), you've probably heard about this guy

his mother called him "WILD THING!"

so he was sent to bed without eating anything.

Max is not a Disney character.

"Max is not a Disney character," concedes Steven Brezzo, curator of the Maurice Sendak Memorial Exhibition, which embarked on a tour ofÂ the nation's libraries and museums on the 50th anniversary of the publication of the children's classic Where The Wild Things Are (1963). "You just think that Central Casting would have said, 'You know, the story is really nice and the kid is really cute, but he's essentially a brat, and I don't think we're going to do that."

With his flawed protagonist, Sendak introduced a different kind of hero for kids, Brezzo claims. Â "Maurice picks it right up and says, 'Yeah, but he's a kid. A real boy.'"

"A child who is naughty.Â And gets angry with hisÂ parents,"Â elaborates Dana Duffy Backs, librarian and adjunct lecturer at Indiana University,Â where sheÂ presented a talk on SendakÂ at the Lilly Library. Â "And then in the end, there's a reconciliation. But he's still gone on this adventure. He's still probably going to be a naughty little boy. He's not going to be perfect after that."

A Rocky Start For The King Of All Wild Things

At the Monroe County Public Library in Bloomingtonwhich isÂ currently hostingÂ the SendakÂ exhibitionchildren are being encouraged to get in touch with their wild side in a craft program. Â After watching a short film version of Where The Wild Things Are, they're decoratingÂ paper crowns to wear for the "wild rumpus," the Bacchanal at the heart of the book. The workshopÂ is one of many programmed with the Sendak show, which displays 50 original works alongside 50 quotations from celebrities about how much Sendak meant to them.

Back in 1963, however, Sendak's place in the pantheon did not seem inevitable.

"When Where The Wild Things AreÂ came out," Duffy Backs points out, "it was a controversial book. It was considered too scary. Some people did not want it on their shelves. Many of those people were librarians and teachers."

Dick and Jane neverÂ misbehaved. There's nothing in there to hold your interest other than the ball rolls away or Spot gets lost for a minute. Â That's about the tension level in that entire series.

"His work was not universally embraced," Brezzo confirms. "In fact, a number of the books were not displayed or offered in libraries for a number of years. They thought it was too disturbing for children."

It's all relative. Â Max was a hellion in comparison with the characters who populated the most celebrated mid-century primers.

"Dick and Jane neverÂ misbehaved," attests Brezzo, who pored over the adventures of the squeaky clean duoÂ in the courseÂ of curating the concurrent exhibition, Tattered Covers and All-Night Reads: The Books Our Parents Loved. "There's nothing in there to hold your interest other than the ball rolls away or Spot gets lost for a minute. Â That's about the tension level in that entire series."

Publisher and Editor-in-chief of juvenile books at Harper & Row from 1940 to 1973, Nordstrom took a dim view of mainstream taste in titles for young people, claiming,Â "Some mediocre ladies in influential positions are actually embarrassed by an unusual book and prefer the old familiar stuff which doesn't embarrass them, and also doesn't give the child one slight inkling of beauty and reality."

In the end, there's a reconciliation. But he's still probably going to be a naughty little boy. He's not going to be perfect after that.

"This was exactly what Maurice Sendak was all about," Duffy Backs continues. Â "Creating beautiful books, but also not sugarcoated, so they didn't really reflect the real lives of children."

Sendak's own childhood containedÂ a heavy dose of reality and not a lot of Â sugar coating. Â Growing up in New York City, Sendak was haunted by specter of the Holocaust.

"He had a smaller family of survivors who came from Eastern Europe," Brezzo explains. "While they were alive they told stories and fables and personal anecdotes and he and his brother would playact the darker scenes and the recountings."

A Trick For Taming Wild Things

Exorcising his demons through imaginative play became a lifelong pastime. From Where the Wild Things Are, Sendak's work became darker and more mysterious, and he found himself increasingly drawn to the unsanitized roots of the folk tale.

It is the prodigal son story. It's the story of the return to the hearth, to the family, and the waiting arms of mother, father, brother, lover.

"He had a deep affinity for the Brothers Grimm," Brezzo notes, "and in fact he took two years and planted himself in a number of major libraries in Austria and Germany and researched their work and re-illustrated them in a darker tone than they were originally presented."

There is a thread that connects the Brothers Grimm to Alice in Wonderland, to Maurice Sendak. "And the common theme is anxiety," proposes Duffy Backs, "and overcoming being in an adverse situation."

Ultimately, Sendak's anxiety-riddled representation of childhood was recognized with the greatest award in his field-the Caldecott Medal. The beloved status of Where the Wild Things Are, though, may be a function of the way that anxiety is resolved.

"It is the prodigal son story. It's the story of the return to the hearth, to the family, and the waiting arms of mother, father, brother, lover."

someone loved him best of all.

Then all around from far away across the world

he smelled good things to eat

so he gave up being king of where the wild things are.

but Max stepped into his private boat and waved good-bye

and sailed back over a year

and in and out of weeks

and through a day

and into the night of his very own room

where he found his supper waiting for him

and it was still hot.