The School For Scandal: Review 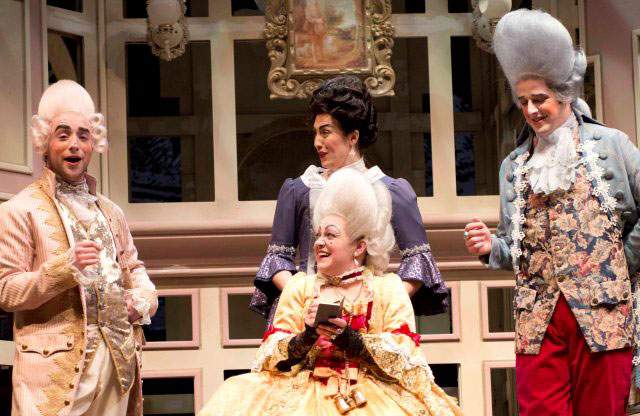 The IU Department of Theatre and Drama's Ruth N. Halls Theatre is currently playing host to a festival of wit in Richard Brinsley Sheridan's post Restoration comedy of manners, The School for Scandal.

Two wit laden stories intertwine. There's a comical mismatch of Sir Peter Teazle a witty old pantaloon and LadyTeazle a witty young country girl. Then there is the story of two witty brothers, Joseph who seems a bit too perfect and Charles who seems a bit too debauched. Add to these figures a quintet of witty scandal mongers and you have an evening with lots of plots and counter plots, intrigues, reversals, upendings, a bit of heart, and-well-wit!

Clayton Gerrard was delightful as the often befuddled Sir Peter. He's older man who married what he took to be an innocent younger wife and now has to suffer with her growing sophistication. Mara Lefler was a charmer as his pert social climbing wife and scandal tyro.

Aaron Kirkpatrick did nicely in a difficult role as Charles Surface, the brother whose surface is all goodness and sentiment, but whose inside is greed and malice. Joshua Krause, the debauched brother Charles Surface was very much the genial playboy.

Austin Wilson played their rich uncle Sir Oliver and his various roles as he sought out the brothers' true natures.

Evelyn Gaynor with a permanent pout painted on her lips and a masterful swish of her long skirt presided over her drawing room's school for scandal as Lady Sneerwell. Nicole Bruce, face made up like a Mardi Gras raccoon was a commanding presence as the gossipy Mrs. Candour. Â Jackson Goldberg, Crabtree, and Drew Jenkins, Sir Benjamin Backbite, were very funny as a quarreling pair of tale bearers.

The costumes are a feast for the eyes with a continuing variety of lines, fabrics and colors. Most of the action takes place on Fred Duer's lovely to look at and very functional open revolving set. Dale McFadden directs this fast moving, multi scened play with a sure hand and although I've emphasized the language, the varied characters and the drama itself are outstanding.