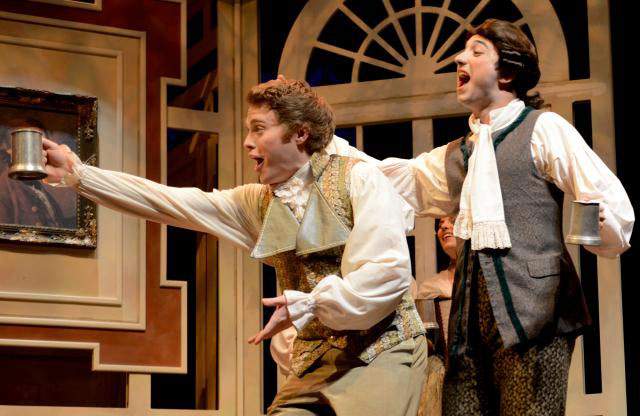 Senior Nicole Bruce plays the gossipy Mrs. Candour and grad student Josh Krause appears as the extravagant and dissipated Charles Surface. Â Mrs. Candour is less than candid and there's more to Charles than the surface. Both actors say they enjoy playing the ups and downs of their characters.

"Mrs. Candour's early scenes are wonderful entrees into the world of The School for Scandal," says Bruce. "She's at her highest and mightiest. She knows everything and is kind of cool and confident.Â That's fun, but -"Bruce wickedly chuckles-"what's really fun is her final scene. For the first time Mrs. Candour doesn't know what's going on. She has only scraps of information and she simply short circuits."

Charles Surface also has an apparent reversal, but it's to a more cheerful outcome. "Charles is a party boy," summarizes Krause. "When we first meet him he's partying. He loves his food. He loves his drink. He loves women as well. He does have faults, but he has a heart of gold. He'll turn out his slim pockets to help someone in need. Â It's fun to play Charles and to see him triumph over his sanctimonious brother Joseph."