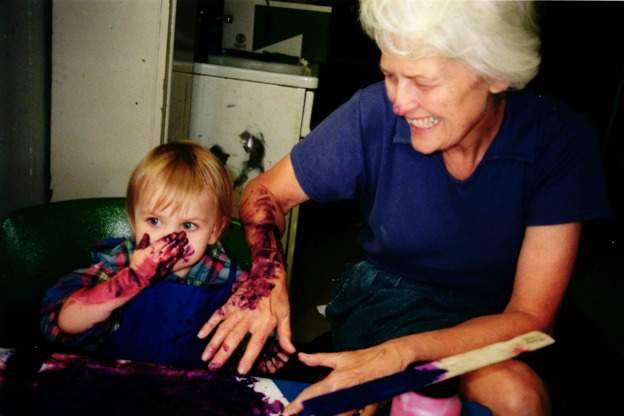 In early May, As the Bloomington Open Studios Tour was gearing up for its fifth year, the group sent sad news. Participating artist Sandy Wood Taylor had passed away unexpectedly at the age of 78. I didn't know Sandy, but I recognized her from the photo in the email I received. I'd met her once. It was during the 2014 studio tour, at her airy, contemporary home in the woods, where she was showing her jewelry and paintings. Her elegance, grace, and humility had left an impression on me.

She was an artist. She just had this desire to make beauty. That's where it all came from. It wasn't about someone saying ‘Oh, you're the best flute player or oh, you're the best jewelry maker.' She did it because she just needed to do it.  There was a lot of integrity to all the work she did.

Reading Sandy Taylor's obituary in The Herald-Times, I soon realized that how many people in the community and the world had been touched by this artist.  An accomplished flutist, Sandy had two degrees in flute performance, had played with several orchestras for years, and taught countless students.  She was also  a composer. Her flute quartet Concurrence was premiered at Wichita State University in 2015, and was juried for inclusion in the 2016 National Flute Association Convention in San Diego, where it will be performed August 12th.

And the most amazing thing was,  she was incredibly nice. She could have very easily been arrogant, and difficult and a prima donna, and none of those things was true. She was just the most, just the warmest, most caring, most giving person. It was a very unusual and a special combination.

It's the rare artist who maintains a serious stake in the visual arts as well as music, but Sandy managed to do so.  Having studied painting with WPA artist Ben Abramowitz in the 1960s, Sandy not only painted but innovated a jewelry technique, using patinated brass.  She launched her jewelry line Snow Shadow in 1980 and ran it for 20 years, participating in over 200 juried art shows.

I hadn't lived in Bloomington long;  and she was one of the first people that I developed a relationship with. She was so magnanimous and generous of her spirit. She knew I was an artist and she just put her arms around me literally and figuratively and brought me in.

In addition to her studio practice, Sandy was a community leader and organizer in the arts, playing a key role in such groups as the Fourth Street Festival, the Bloomington Open Studios Tour, Voces Novae Chamber Choir, and the Unitarian Universalist Church, where she ran the yearly arts and crafts bazaar, and played and sang with the choir.

Sandy Wood Taylor (1937-2016) is survived by her husband Robert, daughters Shelley and Jan, and two grandchildren.