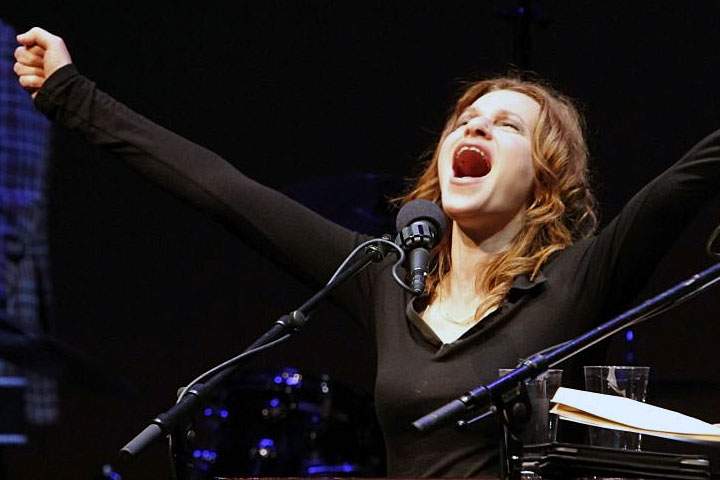 Sandra Bernhard got her start as a stand-up comedienne in the 1970s, and since then, she's made a name for herself as an actress, author, singer and all-around provocateur.

After making a name for herself in California comedy clubs, she was cast as part of the short-lived program The Richard Pryor Show. Her big break came in 1983 when she landed a role in Martin Scorsese's film The King of Comedy. In 1991 Bernhard began a six-year run playing Nancy Bartlett on the sitcom Roseanne one of the first openly lesbian characters on American television. One year after her run on Roseanne ended, she gave birth to a daughter. In recent years, she has performed on and off Broadway and released albums of her live shows.

Bernhard is also an outspoken advocate of equal rights for the gay community.

Annie Corrigan spoke with her from her home in New York City.

We're thrilled you're coming to our little town.

I want to start off with a personal question. I saw on Twitter that you saw Serena and Venus Williams play recently. Are you a tennis fan?

As a matter of fact it's on right now in the background. For this particular tournament we had to actually buy it on television because it's not on the Tennis Channel.

This interview is going in our local arts program. So, my first question has got to be, do you consider stand-up comedy an art form?

Sure, to a certain degree. But I try to transcend just doing stand-up in terms of my whole show, which is really a blend of all the influences I've had in my life artistically from Broadway to rock 'n' roll, from cabaret to burlesque to stand-up. I try to incorporate all different levels and the best of all the levels in my work.

Then maybe you can talk about how you go about developing a certain part of your routine since you do so much.

They all happen in different ways. Sometimes I'll pick out a song that I've always wanted to do, and I'll build a piece around the song. Sometimes I'll just walk down the street and I'll observe something that made me laugh and I'll write it down and expound on it the next time I'm on stage. It happens in a lot of different ways for me.

I don't talk to comedians often, but when I have, the number one thing that comes back is that it's really difficult to be a woman in this business. Do you agree with that?

It's kind of been beaten to death, that whole conceit. I try to jump off of that and say that I think sometimes it's harder to do unique things in this business and really be iconoclastic and original. I think that can either for a man or a woman. Yeah, it's a harder business for a woman because it's run by men, it's a little bit sexist, but if you have your wits about you and you're really talented, you're probably going to transcend that.

I think it's harder to start off now and do something different. When I started in the mid-1970s, the field was wide open because if you were approaching it from a comedic standpoint, there was one or two different ways to conceive it: the straight ahead joke, set-up, joke, (then) Lily Tomlin opened the doors to more character-driven comedy. But, I think now it's all kind of been done. So for me personally, I try to keep it relevant and fresh within the confines of my style.

Can you talk a little bit about working with Richard Pryor?

I really worked with Paul Mooney who discovered me, and Paul Mooney was one of Richard's writers and producers on his TV show, his short-lived NBC show. Paul was really one of my idols and heroes. Of course, I loved Richard Pryor and it was amazing to work with him, but I spent a lot more time with Paul Mooney than I did with Pryor. And of course it was an amazing time to be around all those people. So, I think I learned more from Paul Mooney, and I always try to give it up to him, because he's the words behind a lot of people, not that Pryor didn't write his own stuff. Obviously he created his characters, but Paul has written for a lot of great comics and been not as heralded as he should have been.

What can you tell us that you learned from Paul Mooney?

His advice to me from the first time he saw me was to shed my skin. Always go up there and just keep it real, keep it fresh, keep it honest. That's the most important thing.

What I did today is I sent out a call for people to submit questions for me to ask you.

Yeah, it was totally fun! A bunch of fans of yours here in Bloomington.

Michael has a question. There are many kinds of comedy. Yours is very provocative, sometimes antagonistic. Was this your plan from the start or did you develop it over time?

I think part of my "defensiveness" came out of being in a male-driven business and having to be strong and having to have a real strong point of view. Nobody had really seen that kind of sophisticated, confident approach to comedy before. So that became my style and something that certainly carried me through a lot of challenging experiences along the way. But no, I don't think I set out to do it. It's just kind of inherently who I am.

He also wants to know if there's a joke you ever regret having told?

No. No. *laughs* Since I don't even really tell jokes, I can say there are things that I've talked about that, you know, perhaps were edgy and got people riled up, but I think that's part of what you do as a performer.

That's something else that I talk about with comedians, that they sort of embrace this role as the button pusher for society. Do you see yourself that way, too?

I don't see myself as a button pusher. I just see myself as someone who lifts up the veils and kind of shows you what's underneath. Sometimes it's not pretty and sometimes it's challenging for people to look at themselves. It is for everybody, but that's part of what we do as performers. I'm definitely a provocateur.

Another question from a listener named Jana. She wants to know if having become a mom has changed the way you perform or how you perceive comedy?

No, it hasn't changed how I perform, but I certainly think it has expanded my horizons and the things I look at and understand. I mean, once you're a mother, you're a mother and you understand things that you couldn't before. But certainly it doesn't change my style of performing, no.

Let's say in five years or so, your daughter comes up to you and says, I want to hit the road and I want to make it as a traveling stand-up comic. What would you say to her?

*laughs* I would let her go and do it, absolutely! I don't think that's what she'll want to do, but certainly if she wants to take the plunge, I would say go for it.

Did you ever have that part in your career, where you were a road dog driving everywhere trying to make it?

No, that's not how I started. I was very lucky. I climbed up the ladder. I did the clubs locally and then I started doing some television stuff, and then I got my role in The King of Comedy and after that I was very very lucky. I never had to do the stand-up comedy circuit.

You talked a little bit earlier about being raw on stage, shedding your skin. Jessie wants to know how do you stay so fearless?

I just don't think there's any other way! When you have it, you have it. That's what you do. It's just inherent to who I am. You can't even articulate it really, it's just something I love doing.

You're in New York City right now. Obviously Bloomington, Indiana is a very different town. Our audience is going to be different than what you see in New York or L.A. Are you going to approach us differently?

No. I always have great confidence in the people who come see me perform. I think they're sophisticated. I think they're worldly, well-read, interested in different approaches to culture and politics. And I think they want to see the same show I would do in New York, so I'm certainly not going to water it down and assume that they can't handle it.

On behalf of everyone who's going to the show, we look forward to that.

Yeah, I don't pander to my audiences.

Can you give us a sneak peak of what we're going to hear on April 19?

One more question from me and then you can add what you like. You're an outspoken advocate for equal rights for the LGBT community. I saw that you were recently an officiate at a gay wedding. What was that like?

It happened to be one of the most beautiful, high-end weddings I'd ever been to. It was super gorgeous at the Russian Tea Room and it was really really fun and beautiful and the couple seemed to be very into it and very happy. So, it was really fun.

When I saw this on your Twitter feed I thought, does the make her a high priestess of the gay community? Do you think of yourself in that way?

I certainly think that the gay community thinks of me like that! I hate to say that, but at this point, there's a few of us that are from my generation that have achieved that status. That's a high compliment.

Anything else you want to add before I let you go?

I love coming to university towns and I've always heard great things about Bloomington, and I'm sure it will be a lot of fun for me. It's always great to come to new places and have that experience.

We can't wait to have you!

So much, thank you so much for a great interview.