Kevin Murphy: Well, I wasn't flexible. I was what you should be when you do an opera production and that is what we've done here. It's the epitome of what opera should be. It's a collaboration. It's like the greatest collaboration that there is, opera. You have so many components that come together.

But when you have a conductor and a director that work together, that like each other. And that have the same goals and you have two terrific casts.  Everybody feeds off of each other and you try things, and you say what? What about if we try this? Or what about if we do this?  And Michael is, say, could you maybe play this part, or I'll throw in a dramatic suggestion? I mean, it's not like territorial, it's all about everybody kind of finding the best way to do it.  That's one of the things that I love about opera. A collaboration is that you kind of get inspired with the people that you have around you.

Michael came up with this idea. It evolved in the moment because of the people that we had with us and trying different things and then Alan, adding his chord is like, oh, that spurred on another idea, and that's when you get something really fun. I have to say that in this situation it was really one of the funnest productions I've ever worked. This was just as fun as anything I've ever worked. I'm so proud of the students the way they rose.

And the pianist there hour after hour, rehearsing this way. I mean, Michael is so patient, that's no way to stage an opera. This didn't feel like a compromise. It was something interesting and new. And I I just loved every minute of it.

George Walker: And Michael was coming up with visionary and masterful storytelling, and he's a frequent guest director at IU. What have you directed before, Michael?

Kevin Murphy: In this season, Michael's doubled all of his credits in one season.  He's done the Barber of Seville and Little women in the fall of 2020 as well.

Kevin Muphy: Xerxes. I'll be conducting that one again too, and hopefully we'll have something of an orchestra.

George Walker: What did you have for an orchestra for this production?

Kevin Murphy: Thankfully, with our new collab program, we had two are really amazing pianists. Lucas Nogueira Annemarieke Usuda who are the orchestra and backed up by their amazing colleague Alan Armstrong who is he's a great coach.  He added a lot of fun background noises like organ cues and drama and also reinforced the orchestra.  I have to say, you know... having been around Barber so many time... they really brought out a lot.

Michael Shell: Rehearsal time is not the same as it is typically, because when we're indoors for 40 minutes and then we have to take a 20-minute break. So, knowing that going into it, we also wanted them to get the experience of doing a recit opera. But at the same time, we didn't necessarily have all the time to finesse all of the recit. It's kind of like a school decided to do a live audio stream. They set it up so that it was like an old-fashioned radio play. Where they had a Foley artist who would make noises like doors and keys and all that kind of sound.

It provided me the flexibility to sort of keep people planted, at least in the beginning. One of the characters, the Count.  is one of these singers, who needs to act everything out in order to sing it. He starts doing all sorts of blocking and movement in it, and slowly but surely everybody's either trying to deal with him or they end up trying to one up him. It slowly becomes this spiral and. By the end of act one, except for the fact that nobody can get close, it's kind of feels as chaotic as the act one finale usually does,

Every now and then in the narration I would make it sound like an old-fashioned radio play version of the Barber of Seville, Alan adding his diminished chords and all these kinds of crazy things to sort of punctuate certain things that I said in the narration. 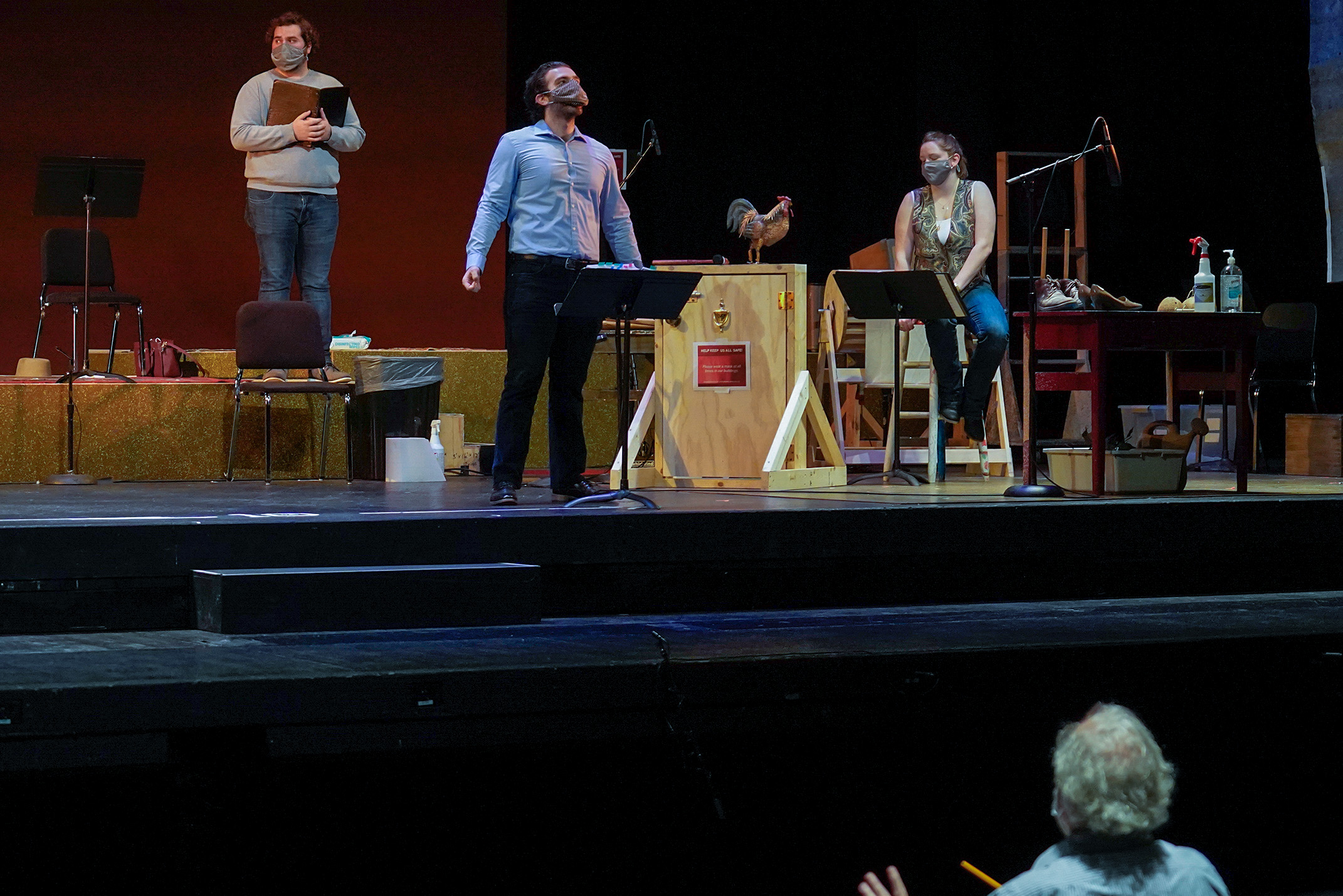 Conductor Kevin Murphy says "opera is a real mix of the people around you and this was the most fun I've had with The Barber of Seville.

Stage Director Michael Shell says "we set it us as an old time radio play that was true to the genre and to The Barber of Seville."

Learn more as these gentlemen explain in the audio.