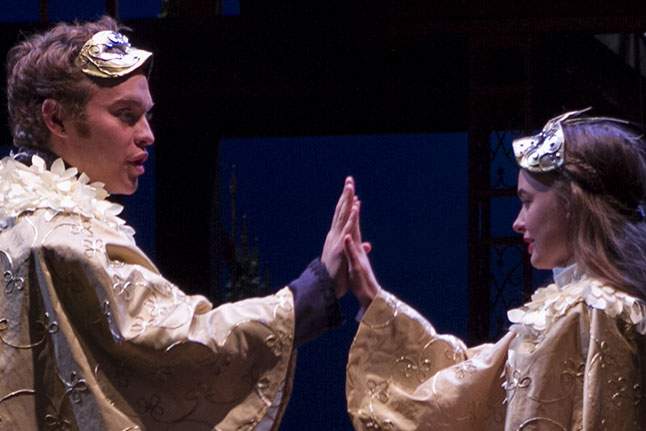 The Montagues and the Capulets are at it again in Shakespeare's Romeo and Juliet at IU's Ruth N. Halls Theatre. I got a preview of the production directed by Nancy Lipschultz with the dress rehearsal.

The show begins with a brawl between the servants of the two families. The Montague's pacific Benvolio, David Gordon-Johnson, seeks to dampen the situation, but the Capulet's fiery Tybalt, Ian Martin, stokes the flames. To add to the fun director Lipschultz and fight director Adam McLean have the two charming ladies of the show's chorus, Marcé Chastain and Courtney Relyea-Spivack, pick up some dropped weapons and get in with the swinging steel. The Prince, Connor Blankenship, condemns the fighting.

Romeo and Juliet always promises some adolescent Elizabethan bawdry and Benvolio with Mercutio, Scott Van Wye, more than deliver as they speculate about the current malaise of their friend Romeo, Josh Krause. Romeo has a bad case of the love bug with the focus on the resistant Rosaline. Just then the illiterate Capulet servant Peter, a comical Dan Shefer, arrives with news of a house party. The fellows decide to mask up and go.

The initially reluctant Romeo sees Juliet, the well-spoken Marisa Eason, and any of the melancholic symptoms of that love bug fixation on Rosaline disappear. Their courtship has all the wonderful joy of the fumblings of teen aged love that the fortunate among us may still remember. Here and later Kristen Alesia is very funny as Juliet's old nurse. With the blessing of the good Friar Lawrence, a solid Mathew Murray, the two are married. In some ways it would be nice to just end the play right here, but that would violate the real forebodings that Shakespeare has foreshadowed with text and character.

A new fight begun by the Capulet's Tybalt breaks out between the families and this time Mercutio is added to the fray. As the love struck Romeo seeks to break it up, Tybalt's sword sneaks under his arm and Mercutio, the Prince's kinsman, is killed. In death Mercutio calls on a "plague on both your houses." The angry Romeo kills Tybalt and flees. The Prince arrives declaring Romeo banished.

The banished Romeo does stay with Juliet for a single night's sweet honeymoon, but then the two are separated. David Koté as Juliet's father, in a surprisingly comic scene, arranges that she shall marry the Prince's kinsman Paris, Jason Craig West. Juliet seeking aid of Friar Lawrence is given the potion that will make her appear dead until Romeo can come for her and the Friar sends a message to Romeo with the details.

Unfortunately, the messenger is blocked by a plague; Mercutio's curse does ring as we hear that word. The banished Romeo has heard a report of Juliet's death and with a poison for himself comes to her tomb. At the tomb, he fights past and kills Paris, commits suicide next to Juliet and she awakening stabs herself with his dagger.

The Prince and representatives of both families arrive, grieve and at the gruesome scene with four of the play's five dead in attendance, swear allegiance and further peace.

The IU production is fast paced and the time goes by quickly. It runs just over two and a half hours with an intermission. Most of the action focuses on intimate scenes, I was actually a bit surprised when the curtain call came and all nineteen of the cast appeared at once.