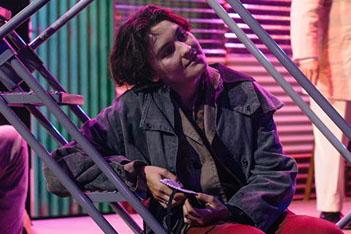 The Indianapolis Repertory Theatre's "Romeo and Juliet" is Shakespeare on a diet. The non-stop ninety minute production is low on fats and starches but still includes plenty of protein and sugar.

There's energy and testosterone flowing among the Montagues with Andrew Aherens as a very appealing Romeo, Ben Tebbe as a sympathetic friend Benvolio and Andrew Navarro as-wella limited but mercurial, Mercutio. In the fight scene with Blaine Hogan as the thoroughly nasty Capulet, Tybalt, things are brought up to date as the leather clad lads do it with brass knuckle and chains before resorting to blades.

The IRT production uses a thrust stage and although the director and the actors work hard to serve both the sides and the front, I'd suggest the front area for maximum impact.

As for sweetness, Kailey Bell is a wonderfully exhuberant, thoroughly delightful, Juliet. She's girl totally smitten, in love with Romeo and in love with love itself. In some productions Juliet and her emotions seem a shadow of Romeos. At the IRT, Juliet and Romeo are on an equal footing.

No Shakespeare play, even the darkest, is complete without comedy and Charles Goad as the Capulet's dithering servant and Milicent Wright as Juliet's nurse more than filled their parts and those moments.

Throughout, "Romeo and Juliet" the diction was exemplary.

"Romeo and Juliet"plays through April twenty-fourth on the upper stage at the Indianapolis Repertory Theatre.