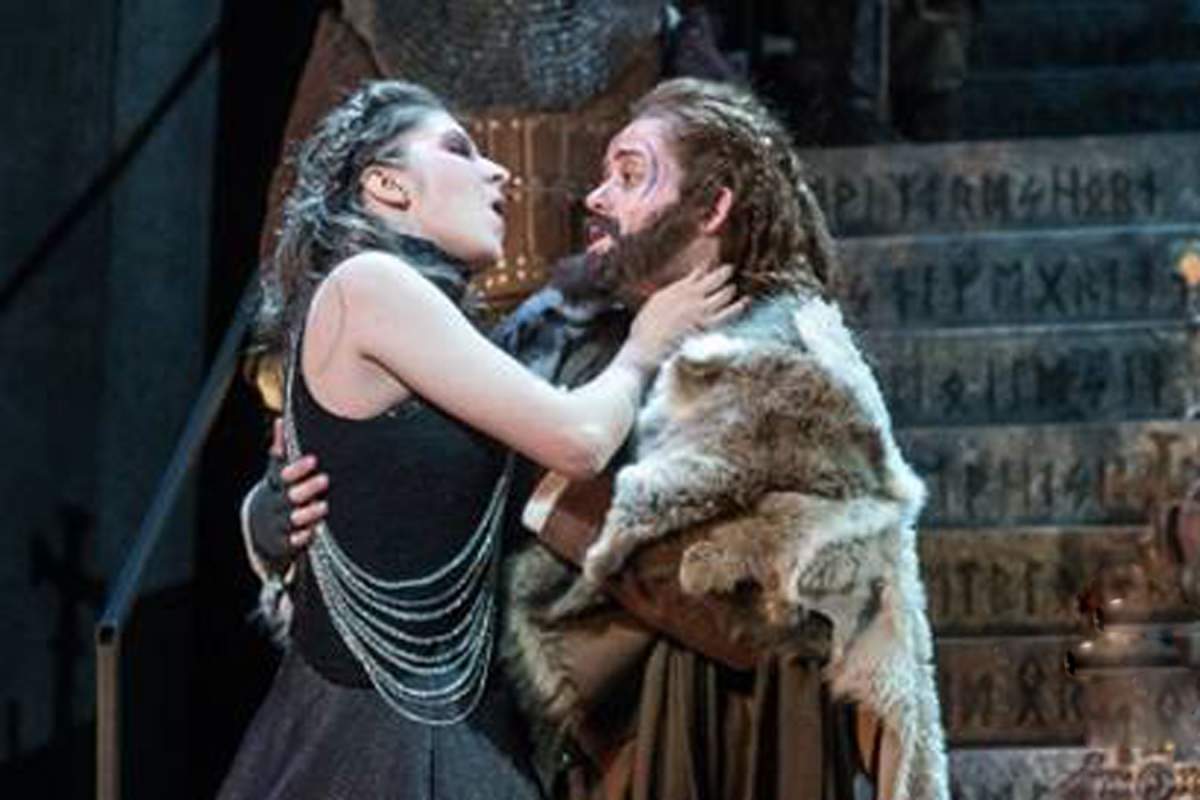 George Frideric Handel's Rodelinda at IU Opera Theater in the Jacobs School of Music is a feast for the imagination, the eyes and the ears.

Stage director Tom Diamond with set and costume designer Philip Witcomb have moved the drama from the balmy sunshine of seventh century Lombardy to cold dark medieval Scandinavia. The story of Rodelinda and Bertarido's enduring love plays out assisted by and commented on by a golden Norse god of love and a dark figure of fate.

Philip Newcomb's sets are on the massive side. The opening curtain is a candle strewn, rock wall with a huge medallion that opens in sections. In the opening scene a three story stairway leads up and out of the set. Later a huge memorial stone face pierced by a sword fills the stage. As the evening goes on more and more large grey swords rest their points on the stage. There is an interruption as a more intimate set of stairs leads up to the thrown of the play's center, but then it's back to swords and the fall of lanterns in the finale with a collapse of a ballroom.

Newcomb's costumes for the characters creatively seem to take their cue from the rough and fantastical designs of the TV series The Game of Thrones. For Bertarido the usurped king and his confidant Unulfo it's the rough multi-layered outer garments. For Bertarido's mourning faithful wife Rodelinda at court, there is a full dark flowing gown and for his sister a mass of white hair, white make up and a flowing white gown. The usurping Duke Grimoaldo is all in black with a golden front and his henchman Garibaldo is in simpler black.

At the left and right of the stage for Rodelinda are the haunts of Freyja, the Norse god of love and Urd, the god of fate. Freyja sparkles in gold with a headdress of eagle feathers. The dark clad Urd has little electric lights and a headdress of antlers.

Saturday night's Rodelinda was Ashley Valentine. She was equally effective in her laments, denunciations and love songs. Valentine was nicely matched by her love Bertarido nicely acted and sung by Elise Anderson. Their duet, the only one in the opera, was a special pleasure. Mezzo Yujia Chen was a strong singer and flamboyant figure as Bertarido's loyal sister Eduige. Bertarido's confidant Unulfo was sung by Gabriela Fagen. Fagen has a smaller voice, but she was gracefully expressive as she kept well within her range.

Edward Graves sang the demanding dramatic and vocal role of the stiff usurping duke, a man so impressed by Rodelinda's courage that during the course of the opera he is converted to virtue. In the program notes, mention is made that Graves has recently switched from baritone to tenor and it seems to be working well.

The villain of Rodelinda is the usurping duke's henchman Garibaldo. He's urging the duke to be a vicious tyrant when he's also trying to engineer a way to the throne for himself. Jianan Huang made a good intriguer.

Throughout the evening dancers Nicholas Gray as love and Alia Federico as fate were actively involved in the drama. Love's dancing ranged from swoons to joyful jumps while Fate could hint at darker moments. The opera is almost entirely solo work that can be a bit static, the dancers were very much a part of the drama emotions and the actions of the evening. Choreography is by Michael Vernon.

Gary Widow conducted the dramatically effective performance.  The IU Chamber Orchestra was featured in the production. Widow and stage director Tom Diamond were at IU for Handel's Giulio Cesare in 2009 and his Xerxes in 2013. These and other works by Handel are supported by the Georgina Joshi Handelian Performance Fund.

You can see this review and other reviews and interviews at WFIU.ORG