A Train In The Distance: Scenes From The End Of The Line 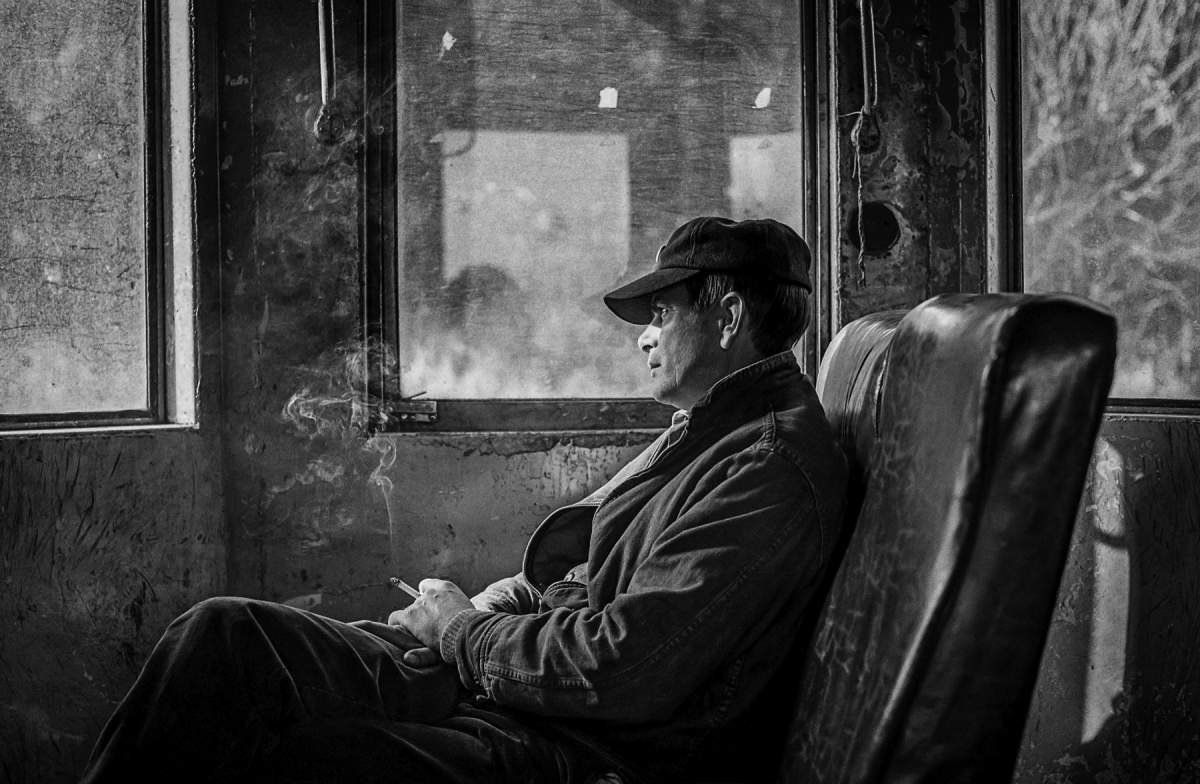 Jim Maire is tromping through the underbrush in the old train yard south of Bloomington.

"We are looking for the roundhouse...hopefully it's around here somewhere," he says.

His camera and long tripod are slung over his shoulder. He holds onto his gear as he pushes through the thick brush.

Although the area was once a train yard, little evidence remains. Part of the land is now cleared for Bloomington's B-line trail, but most of the land is totally overgrown.

"Well, its just amazing how quickly its coming back," Maire notes, "you let this place go another 15 years it would be a jungle."

This isn't the first time Maire has photographed this train yard. Back in 1973, Maire took a series of photographs, for a photojournalism class at Indiana University.

Maire is originally from Bloomington. He joined the Navy after high school and used the GI bill to attend IU.

"I was interested in photography before, but when I came back I decided that's what I wanted to do and I took all the photo courses I could get my hands on," explains Maire.

His professor was famed photographer Will Counts. Maire says that they were given a semester-long project. He chose to document the train yard.

Maire has a personal connection to the yard. His grandfather, Ed Myers, worked for the Monon train company for over 50 years. He was a train engineer who worked in the yard. When he was young, Maire says, he would explore the train yard with his grandfather.

At that time, the train switchyard was know as the McDoel Yard. It was where train workers organized the trains. They literally lined up the train, boxcar to boxcar, and sent them where they needed to go.

To Jim's budding photographic eye, the McDoel Yard was ripe with possibility. "Everything seemed so photogenic to me when I got there," he says, "I had this real gritty view of what I wanted, kind of graphic-novelish almost, only not with the dark backgrounds."

Maire planned to document the way of life in the train yard. It 1973 and Jim walked up to that yard office on Grimes Street with his camera in hand. He went in and talked to the yard manager, hoping to get permission to take some photographs.

Maire had been out of the Navy for over a year. His hair was long. "It's just not somebody I thought who'd let me in the train yard," he jokes.

Maire explained his project to the yard manager and said his grandfather used to work there. The manager recognized the name.

"He just says, 'Well go out there and take everything you want, just don't get run over!' So then, I was in."

Pictures All Over the Place

Maire spent three or four months taking photographs of the men who worked in the switchyard. Much of his time was spent with the workers, getting a feel for what the work was like.

The yard was dirty and loud, but Maire's photography often looks peaceful. In one photograph, a train worker is sitting in the back of a train car. The grainy black and white image makes everything around him looks chaotic and loud. But the figure looks calm, quietly staring out the window.

"It was kind of a learning experience. At first, it was hit or miss. But there were pictures all over the place waiting for people to take them," says Maire.

After attending IU, Maire moved out west, to Utah. His McDoel Yard photos were packed away.

But a couple of years ago, for fun, Maire dug up some of his old college photos. He scanned some and put them on his website. To his surprise, the Monroe County History Center contacted him about showing them there.

"It was fascinating for me," he says, "it was a piece of history in my life."

After more than 40 years, Jim's photos are now on display.

Maire remembers an old train saying his my grandfather told hims "'Run to the roundhouse Nellie, you know they can't corner you there.'  My grandfather used to say that."