Off The Stage, Into The Store With Reverend Peyton 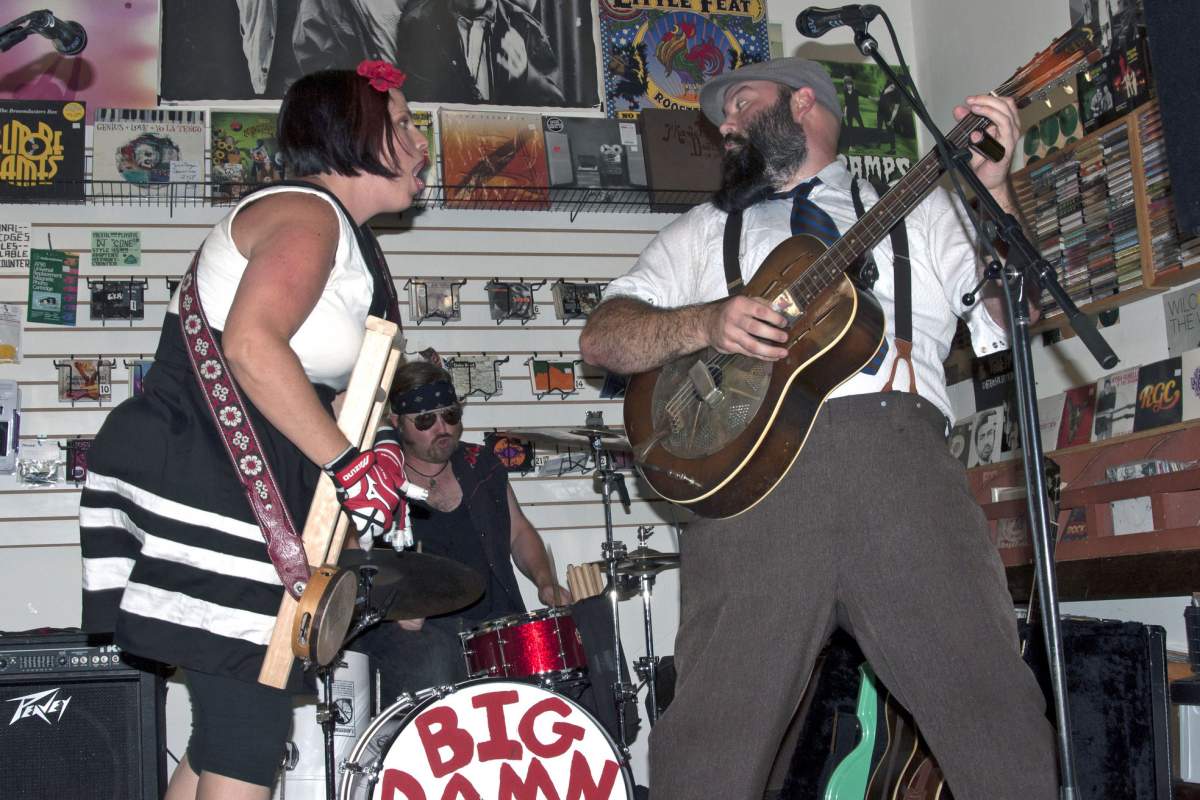 In the age of iTunes and digital music downloads, independent record stores are forced to find ways to stay relevant. Stores like Bloomington's Landlocked Music offer something music fans can't experience through their computers live performances.

Off The Stage, Into The Store

Landlocked Music co-owner Jason Nickey says there are two kinds of bands that do in-store concerts: the bigger bands that could play a show at another venue in town, "and then there's the bands that just need some gas money to get to the next venue and a meal."

The show today is by a group that Nickey considers a bigger band, but one that also happens to call southern Indiana home The Reverend Peyton's Big Damn Band.

The band is performing a series of shows at record stores all over the Midwest in support of their new album. The Reverend Josh Peyton does like performing outside the club scene on occasion.

"It's a completely different vibe," he says, with the fluorescent lights and rows and rows of records. "But at the same time, I think it's fun for the fans because they get to see us completely out of our element."

Fans Of All Ages

Sitting at the foot of the stage is one fan who can't attend shows at any of Bloomington's many 21-and-over venues 8-year-old Xavier Kelly.

For him, all-ages shows like this one are the only chances he gets to see his favorite band perform live. The last time he saw The Reverend Peyton's Big Damn Band was another free show as part of the Taste of Bloomington.

13-year-old Bella Baucco was attending her first Reverend Peyton show. She was part of the contingent in the front row wearing Reverend merchandise. The drummer, Aaron "Cuz" Persinger, is her uncle

Persinger had a number of family members at the show who made the trip from Jackson County, including his mother Molly Persinger, grandpa, niece and sister. Molly says she likes attending the early shows that tend to be shorter than the band's club performances.

While most shows at Landlocked are free of charge, they are not free to put on. A makeshift stage has been constructed in the back of the store so the scores of people sandwiched between the aisles can get a good view. The store also foots the bill for a P.A. system and a sound technician to professionally record the show.

Nickey isn't too concerned with the financial aspects, though. He says some in-store shows bring in extra money and some don't. As long as he more or less breaks even, that's fine with him.

"Honestly I don't think about that," he says. "It's more just, is this going to be fun, are people going to like this and have a good time?"

You Scratch My Back, I'll Scratch Yours

The store and the band have a mutually beneficial relationship. It was Reverend Peyton who approached Nickey about Landlocked hosting this free in-store show for fans. For the Landlocked, events like this get new shoppers in the door.

"These kind of places are important community hubs and (Reverend Peyton) recognize that and are willing to go out of their way to support them in a direct way," says Nickey. "It's really cool that a band thinks about that. Not a lot of bands do."

As for The Reverend, his final words on stage were a shout out to the store:

Thanks to Landlocked for supporting us. That's why we're here. It's small record stores like this around the country that have supported us, so keep supporting them.