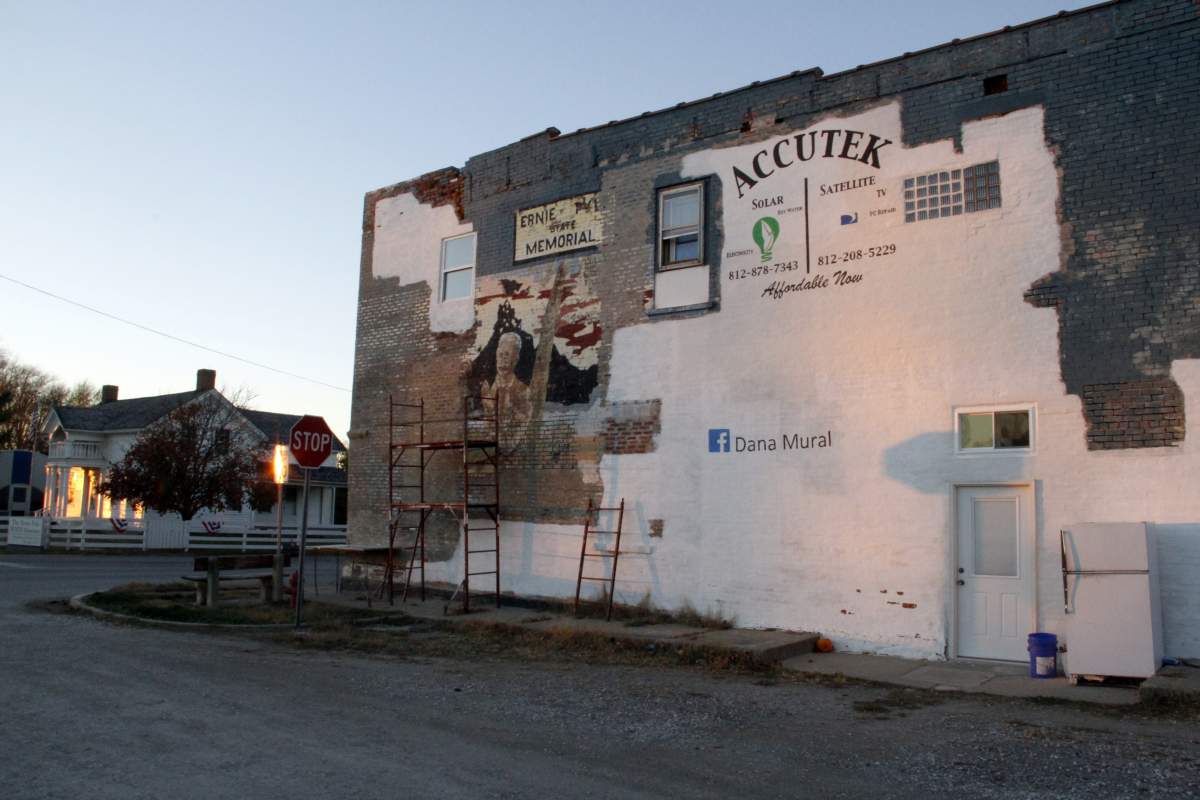 When you used to enter Dana, Indiana from the south, one of the first things you would see is a portrait of Ernie Pyle, the renowned WWII war correspondent. He was painted on a wall mural, surrounded by four GIs from each of the military branches. But these men are vanishing behind white paint.

Quil Davis is 39 years old and lives in the building with the mural. The mural has been around for years. Quil remembers seeing it as a little kid. He was born in Clinton, just south of the town.

I was filled with this feeling that I had to do something to keep it going so that my kids and their kids can come up and see the mural for the first time and experience the thing that I experienced when I first saw it.

"They have a festival every year in the fall," Davis recalls, "and I remember coming up and seeing the mural back in its original glory when it had been retouched just recently then, and thinking how amazing and how big of a picture it wasof course before I went off and saw anything else in the world!"

After moving around the Midwest, he eventually he came back to Vermillion County and Dana. A creative financial move during the 2008 housing bubble burst allowed Davis to acquire and move into the building with the mural from his childhood.

"I remember actually it was the same week that President Obama was elected and we were moving in here and it was always locked in my mind as being something that I was hopeful about at the time that things would get better."

Time had taken its toll on Ernie's image. It had been years since it was last redone. Jeffrey Dowers was commissioned to make the mural in 1984. It's also been repainted twice. But repainting wasn't the solution this time. Davis believed the wall was on the verge of collapsing; so the mural needed to be sacrificed in order to fix the wall.

"Immediately I was filled with this feeling that I had to do something to keep it going so that my kids and their kids can come up and see the mural for the first time and experience the thing that I experienced when I first saw it."

Outside the building, scaffolding hugs the wall and ancient bricks. Progress has been slow. Davis is rehabbing the building on his own and out of his own pocket, save for some donations from a GoFundMe account and one sponsor: Accutek Solar. He's essentially redoing the entire wall. He's had to take out bricks, repoint the old mortar and replace the bricks. He's applied white water-sealant paint over the completed areas. The building is 141 years old, so it's delicate work. And it's dangerous too.

Davis plans to hire an another artist to repaint the mural when he's done repairing the wall. He recognizes the role the mural plays in maintaining Pyle's legacy in Dana. But he's aiming for some small changes.

"There's been suggestions that maybe it's not the best idea to promote Ernie Pyle smoking a cigarette," Davis jokes. "That could go away without losing some of his legacy."

It's a legacy the town revels in. Last April it held a service for the 70th year since Ernie Pyle's death. When Davis speaks with town residents, he notices, "You can see that they're upset that something they know and loved for so long is going away. Then they get the smile on their face when I explain why it has to go and that it's going to be put back and done better than ever, hopefully."

I sat down with Davis inside Peeble's Pizzeria just down the street. Four older patrons were singing karaoke in the new restaurant. If you asked the Helt Township Trustee, Kevin Wickens, how he would describe Dana, his response is simple

It's not going to be the thing that changes everything, but it might be the little nudge that we need to get over the hump.

The town measures about half a mile across. The 2010 census recorded the population at 608 and Wickens estimates it's still around that number. Aside from preserving a legacy, Davis thinks a renewed mural can give the town an economic boost. He took a trip to Danville, Illinois to see the 15 murals a group known as the Wall Dogs had done there. He thinks those murals helped.

"It's not going to be the thing that changes everything," Davis concedes, "but it might be the little nudge that we need to get over the hump and to turn the tide on us."

Wickens feels confident the spirit to do just that still resides in Dana.

"[In] Dana in particular, there still is, fortunately, a fair amount of community spirit," Wickens claims. "All these little towns, you drive down their main streets and you see all these empty buildings or burnt down buildings…Dana has fared better than most. So, if there'd be just a little economic boost, I think there's potential for some growth and improvement, but… time will tell."