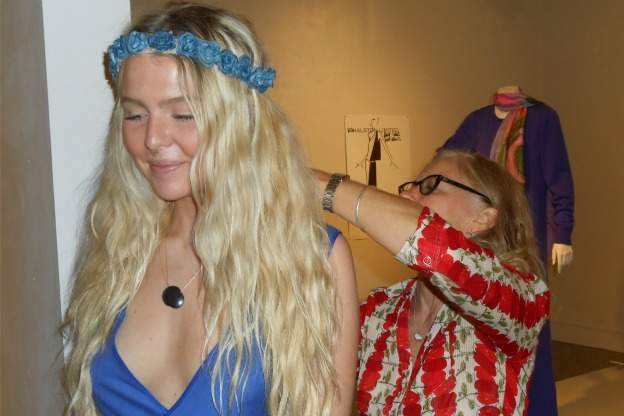 Roy "Halston" Frowick Â (1932-1990) was a renowned American fashion designer whose style came to define a generation. But the darling of 1970s Manhattan had spent his adolescence in the Hoosier State, where he also attended Indiana University. Halston's legacy is being celebrated on campus in an exhibition of his vintage pieces and a design challenge in which current IU fashion students will be sending their own Halston tributes down the runway.

"Halston understood the collective taste and the pulse of the culture at that time," explains Kate Rowold, Director of the Sage Historic Costume Collection, home ofÂ many of theÂ Halston pieces in the exhibition on view at IU's Grunwald GalleryÂ Halston: Line and Legacy.

"He is the look of the seventies, no doubt," adds Kelly Richardson, Curator of the Sage Collection, and of the show at the Grunwald Gallery. Â "He made clothing for strong bold women."

"The general linear silhouette was very very popular," Rowold elaborates. "It didn't hearken back to the hourglass shape of their mothers. And it was a little hotter, a little edgier."

The cachetÂ of Halston's look propelled the designer to the upper echelons of society. Â "He was really the first superstar designer," Richardson proposes. Â "He was out with Bianca Jagger, hanging around with Andy Warhol, Liza Minelli, Jackie Kennedy. He was in an episode of The Love Boat. The fact that he was such a good looking, stylish man did not hurt."

"The persona that we understand or that we think we understand," suggests Rowold, "was the persona from the paparazzi, from the press, from Studio 54." Â However, Rowold asserts,Â we may not have known much about the private man behind the glamour, an identity that has been revealedÂ in a recent biography by Lesley Frowick. Halston's niece and confidante lent several pieces from her own collection to the show, and gave a talk about her uncle at IU earlier this month.

Many people, for example, might be surprised to hear about Halston's Midwestern roots. Having spent his first decade in Des Moines, Iowa, Halston moved at age 10 with his family to Evansville,Â where he graduated from Benjamin Bosse High School. HalstonÂ found his way to Indiana University inÂ the spring of 1952, where he spent a semester studying fine arts.

He "apparently did very well," Richardson claims, "but wanted to move on." After studying at the Art Institute of Chicago, Halston entered the millinery business, ultimately setting up shop in the tonyÂ New York department store Bergdorf Goodman. Â Halston designed the trend-setting pillbox hat Jacqueline Kennedy wore to her husband's 1961 inauguration.

Although Halston came to represent the ultimate in sophisticated style, Richardson reminds us that he was unpretentious about his origins-

"He said, 'You know me, I'm as American as apple pie'," Richardson quotes, "'I'm the original Mr. Sweater Set. I like casual clothes and have never been able to make them. When I was a kid, I always shopped at JC Penney. Remember, I am from Des Moines Iowa.'"

But Richardson can't help but customize that statement-

"And I have to add, Indiana as well."

In a basement studio in IU's Memorial Hall, twenty or so fashion students are creating designs inspired by Halston. As Haley Garl puts together a black knit, halter-top dress, the designer's Hoosier roots are not far from her mindâ€“

"Halston was from Indiana," Garl considers. Â "You don't think somebody like that would go on to be a huge famous designer. Maybe you'd think someone from New York would do that."

Another surprising aspect of Halston's effortless-looking glamour was the rigor of its construction.

"Oh! The eyes get wide as they realize how much really does go into it!" exclaims Deb Christiansen, senior lecturer in fashion design and director of undergraduate studies in the Department of Apparel Merchandising and Interior Design. Christiansen isÂ weaving through the studio, monitoring students' progress, as she explains the #Halston: Student Design Challenge.

"My upper level design students were challenged to be inspired by the Halston exhibit and Halston clothes," she explains. Â "We actually got to go in before the exhibit opened, and we were able to show them inside the clothing."

"He didn't add any zippers or buttons or any other closures," Garl noticed. Â "He had a way of using one big piece of fabric and manipulating it so that it would fit the body perfectly."

"Especially with his wrap dresses!" student Mary Grace Jackson chimes in. "How much fabric did he really use for that? He had to plan it out so perfectly. That seems like a lot more work than you would thinkÂ when you see aÂ wrap dress."

A Study In Effortlessness

Christiansen is having to accelerate the instruction of certain techniques to equip her students for the Halston challenge. Â Halston's technical skills were impeccable, Christiansen notes. Â "He started as a milliner. Â That's architectural; that's engineering. He knew how to engineer things for the body."

And he could pull off that engineering effortlessly, like a dancer.

"Actually I think that's why he was so close with Martha Graham and Liza Minelli," Christiansen confirms. "The flow, the dance moves, the subtle organic nature of how he executed, was exactly [the way]Â a dancer would execute."

Christiansen's students will be showcasing their own efforts to express casual elegance via technical meticulousness in a runway show in the gallery alongside Halston's originals.

"They can be inspired by Halston," Christiansen proposes, "and still let it express their own, what I call, 'conceptual signature'."

"Hopefully I can make it into something people will wear now," venturesÂ student Paul Rumer.