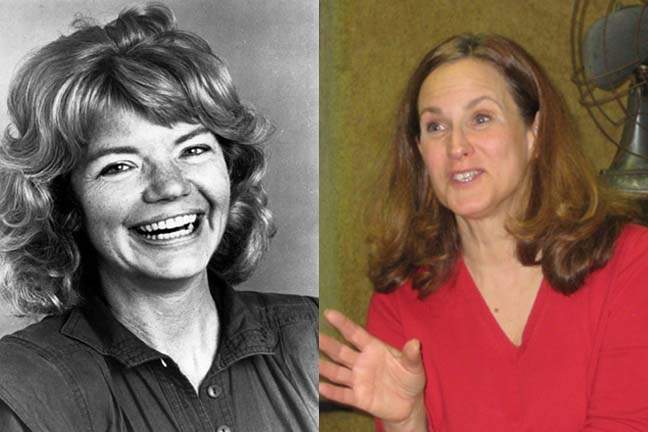 Molly Ivins was a liberal gadfly who delivered her stings and plaudits with a broad sense of humor and an accent that smacked more of her Texas birthplace than of her alma mater, Smith College. There's a generous helping of both in Red Hot Patriot the kick ass wit of Molly Ivins.

A couple of journalist sisters, Margaret and Allison Engel have written a one woman show base on Mollie's history and her writings and the Cardinal Stage Company has Dianne Kondrat and Alex Gulck performing the piece in Ivy Tech John Waldron Arts Center's intimate Rose Firebay in a production directed by Martha Jacobs.

The show is very funny. The story of Ivins' journalistic odyssey from small liberal weeklies where she was an "anti war liberal in oil country" to larger papers, The New York Times and even televison's Sixty Minutes is one that she tells with gusto and wit. She's especially funny about figures in the Texas Legislature. Yes, she's the one who nicknamed here high school classmate, George Bush ‘shrub."

At the same time there are touching moments of sadness. John Henry Falk, a writer and critic whom she idolized was black listed. A love of her life was killed in Viet Nam. She had a battle with breast cancer that she described candidly as "massive amounts of no fun." Framing the monologue is Ivins' failure to ever deal effectively with the father that she could never please.

From beginning to end of the production Ivins is presented as a lively, thoughtful woman. She was genuinely funny, but used her humor to educate, persuade and activate. Her final words on the show talk about bad angry times when "the few are screwing the many." But she remains an optimist about activism and a celebrator of "the good fight."

The Voice And The Face

I read Mollie Ivins' columns and occasionally heard her warm richly accented voice, but I never saw her. So for me, Dianne Kondrat's face as she played the broadly smiling, energetically thoughtful lady will always be attached to Mollie's words. And I'm pretty happy with that thought.

The Rose Firebay is a one hundred seat theatre and Cardinal Stage Company has added extra performances, you can find the details on their web site or at WFIU dot ORG.