In The Red And Brown Water 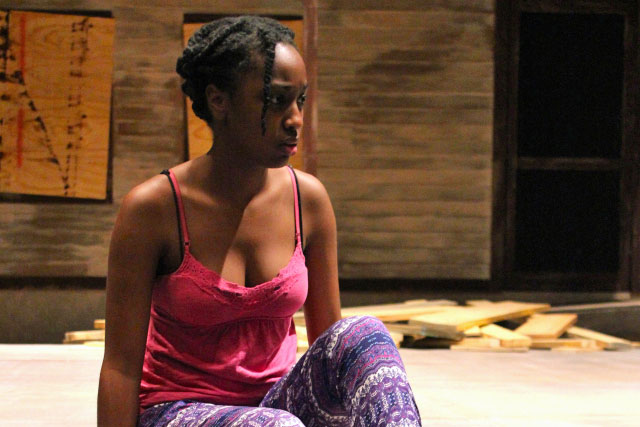 Award winning playwright Tarrell Alvin McCraney's In the Red and Brown Water directed by David Koté at IU comes to life on designer Kristen Martino's bare stage thrust into the U of the Wells-Metz Theatre's audience. The back drop is a porch and a boarded window, two story with house with more than its share of signs of wear and abuse. Overhead power lines frame the ceiling as they run to a tall pole left of the house.

McRaney's play draws its characters from West Africa's Yoruba mythology and it begins with a flash of lightning and a boom of thunder on the gesture of Oya played with great variety by Patricia Millard. Oya in the mythology is a female warrior of winds and storms.  In the play she's a terrific runner. Oya's mother Mama Mojo, the dignified Justina Anigbo, is a powerful woman that others come to for advice and to interpret their dreams, but she's dying. Oya is offered a college scholarship out of the projects, but her tragedy begins as she loses her chance staying at home to nurse her mother.

Her chance lost, Oya is courted by the Shango, a macho Ian Martin, and Ogun, a gentler Kevin Renn.  Shango is a figure of fire and thunder. Their relationship is often a tempestuous one with extended angry conflict and brief sweet reconciliations.  As the story of the play goes on, he enlists and rises in the military. Ogun in Yoruba culture is among other things a worker of metals and as Oya's gentler lover he's seen heading off to work in coveralls with lunch box in hand.

Other characters that standout are the charmer Yusef Agunbiade as Elegba, Yoruba's trickster and thief and the strong singing Brianna Milan as the alternately stately and sexy Aunt Elegua. David Gordon-Johnson was effective as the coach who would recruit Oya and the store owner frustrated by the tricky Elegba's thievery.

For In the Red and Brown Water playwright McCraney borrows a technique from story theatre. The actors speak their stage directions. So, Oya might say, "Oya smiles." And then she smiles. Sometimes this drew a laugh, sometimes a bit of dread. It's an interesting way to keep the audience aware that this is a play.

In addition to the influences and characters from Yoruba mythology, Playwright McRaney sites Federico Garcia Lorca's play Yerma as an inspiration for In the Red and Brown Water. The two plays share a potent sense of community and of belief in powerful mythic forces. Although they're very different women, like Yerma, part of Oya's tragedy in a community whose only hope is for children is that she's frustratingly barren.

The IU Production is musically rich with composition and musical direction by Maiesha McQueen in very fine singing by the cast. I particularly enjoyed the way the community of In the Red and Brown Water comes together in the traditional "You've Got a Right to the Tree of Life" and "Down by the Riverside." McQueen's arrangements and original work were very nicely integrated with the evocative elements of Ari Swartz sound design.

The IU Department of Theatre, Drama and Contemporary Dance's production of Tarrell Alvin McCraney's In the Red and Brown Water directed by David Koté in the Wells-Metz Theatre continues Tuesday through Friday at seven-thirty and Saturday at two and seven-thirty. You can find this review and an interview with David Koté on our web site at WFIU dot ORG/arts