Crossroads Rep Returns To Its Beginnings In Style 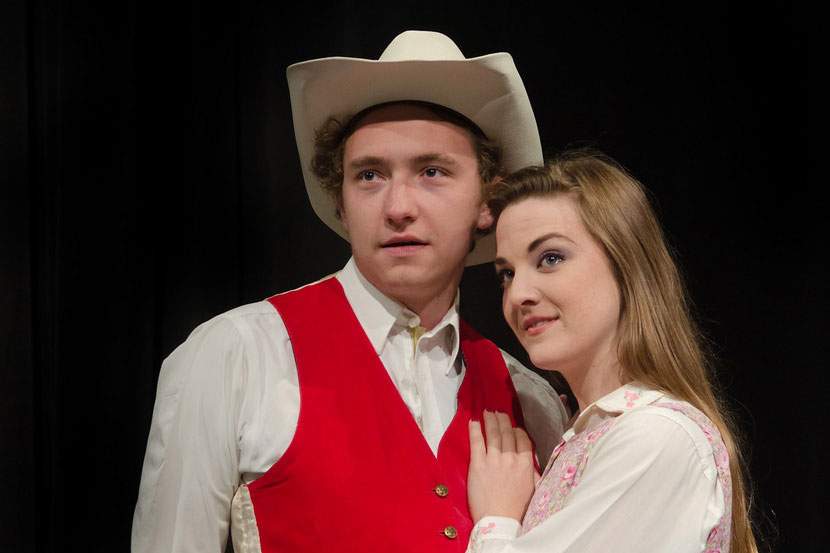 The Crossroads Repertory Theatre celebrates their 50th Anniversary Season with a  fine production of N. Richard Nash's play of doubt versus faith, The Rainmaker. It's the show that got things started summers at Indiana State University in Terre Haute those fifty years ago.

The Rainmaker is in ISU's New Theatre on a bare stage with just a few props. It's a minimal setting for a richly characterized production of the strains and pains of farming in the southwest during the droughts of the 30s.

Farmer H.C. Curry, Peter Ciancone with his sons Noah, Dylan Gentilcore and Jim, Will Rupert, and his daughter Lizzie, Molly LeCaptain are up against it. It's a hot dry summer with a blistering sun that's burning their crops and killing their cattle. In addition stiff son Noah, the farm manager is convinced that Lizzie is growing up too old and that younger son Jim is growing up too young. There's a lot of family tension that H.C. is barely able to contain.

Onto the scene comes Andrew Behling as Bill Starbuck, the fast talking Rainman himself. Everyone believes he's a conman and a liar, Lizzie especially. But they all want so much to believe in his dream of rain, of water, of gulleys full of water. Jim pounds a drum. H.C. paints a large white arrow. Lizzie holds her tongue and Noah glumly hands out the money.

One of the nice touches of the Crossroads production directed by Arthur Feinsod with choreography by Teresa McCullough is in the breaks between scenes. The stage hands join cast members as they dosey-do their way through the rearrangements of the furniture.. It works very nicely for all of the breaks except the one following the heart wrenching scene of Lizzie confronting a rather bleak future as a spinster and visiting aunt.

In a later scene the Sheriff, Chuck Shutt and his deputy File, Brandon Wentz are looking over a wanted poster that outlines wide variety of Starbuck's aliases and schemes. They want to arrest him, but the Curry's want to protect him and the dream that they're all participating in, Lizzie most of all.

There are twists and turns in the very nicely worked out plot and in the growth of the characters in The Rainman. Performances do end with a flash of lightning and clap of thunder…Sunday there was a bit of irony in the conclusion as all afternoon the theatre had been rocking to thunder and rain from our own far from dry summer.

The Rainmaker at the Crossroads Repertory Theatre continues in rep' with performances through July 22. This Friday A Wrinkle in Time opens.