Finding A Missing Piece In The Local Arts Scene 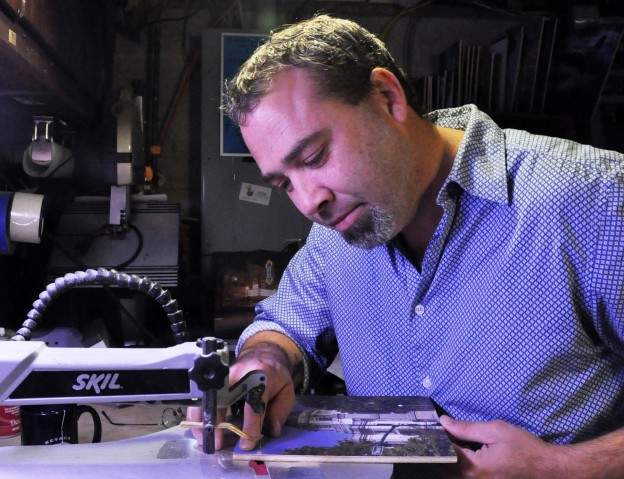 Maybe it's something in the water around here – people just can't help becoming creative, even if they don't think they're creative.

"I'm not necessarily an experimental soul that just wants to play with different variables to see what happens," says Marc Tschida, the woodworking craftsman behind Press Puzzles. Tschida's carefully-cut wooden jigsaw puzzles let players piece together images of beloved sights around Bloomington and the IU campus. "I tend to learn what I need to learn to finish a job that's in front of me. I'm generally backed into a corner by a deadline of having to get something delivered, before I learn a new skill."

Tschida has been a familiar figure behind the scenes of the Bloomington arts community for 30 years. He has run nightclubs, managed bands, promoted events, and until late 2016 was the Managing Director of the Cardinal Stage Theater Company. So why turn a woodworking hobby into a jigsaw puzzle business? Simple!

He had run out of Bloomington-themed gifts to give away. So he started making his own.

"Originally I was using Cardinal Stage set lumber as the backing board of my puzzles," Tschida revealed. "And so my first puzzles, the image would be a photograph of Bloomington. The back side of the puzzle could actually be a hand-painted set piece that you might've seen onstage at a Cardinal performance."

After Tschida had some difficulty convincing art fair jurors that his craftsmanship lay in cutting the puzzle pieces - not the images on the surface - he turned again to scrap in search of something new. There were multi-colored wood veneers just sitting around his basement woodshop, so Tschida dove into the old find woodworking art of marquetry making intricate pictures with colored bits of wood.

Marquetry allows Tschida to create his own elegant designs, while the smaller gift puzzles keep him connected to his beloved community. He also partners and collaborates with arts organizations and visual artists for more unique puzzles with a regional flair. Now a full-time puzzle craftsman, Tschida will expand his Indiana-themed puzzles this years with a series using dried flowers and leaves collected from a forest in Brown County. Whether he meant to or not, Marc Tschida has made himself into a creative artist.