Beyond Pussy Riot: Letting Russian Punk Speak For Itself

By Taylor Killough and Mark Chilla 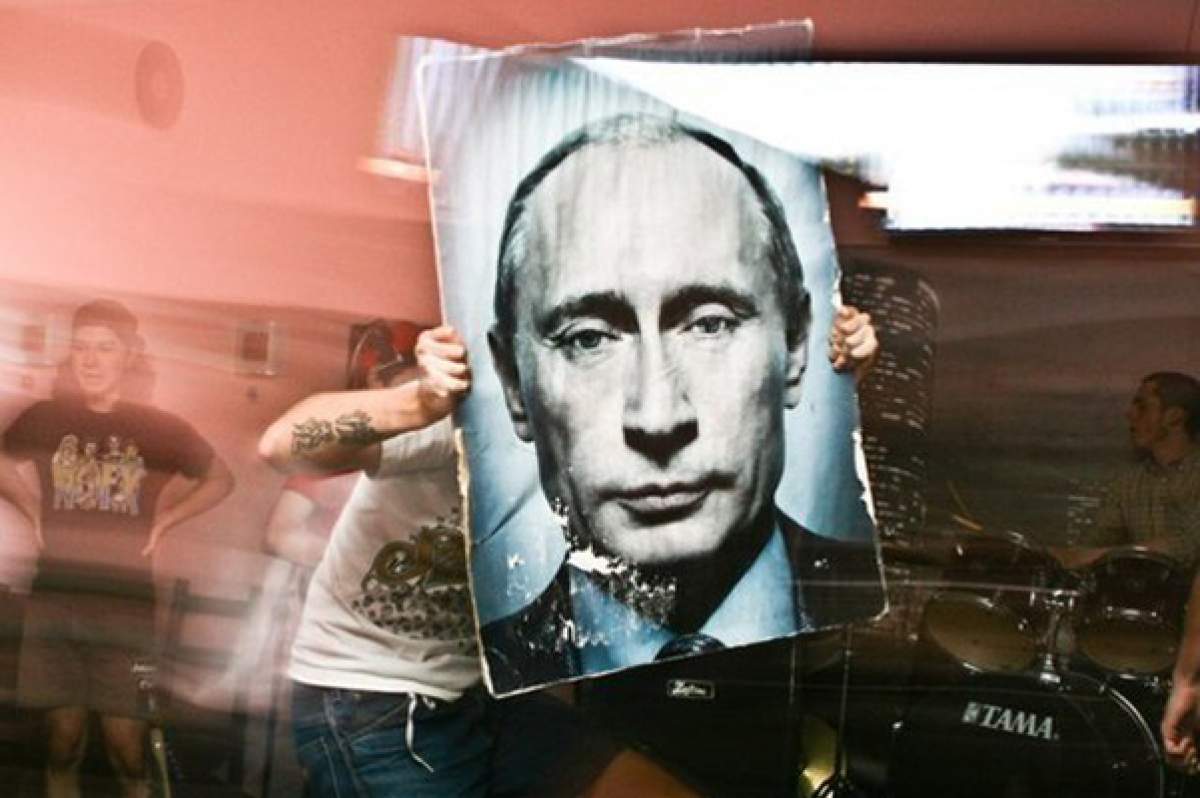 "Mother of God, drive away Putin!"

Female Russian band Pussy Riot exploded onto the global stage in 2012 when they performed an anti-Putin protest song in Moscow's Cathedral of Christ the Savior. They have become globally known as Russia's premiere contemporary punk rock band, and their arrest has been dominating headlines and validating punk rock music as an important force of social change in that country.

But punk rock in Russia has a rich and sometimes clandestine history. How did punk rock-a musical genre originating in Western democratic countries in the 1970's-make its way into the Soviet Union? And how did it grow from there?

These are questions Alex Herbert, an Indiana University Russian Studies graduate student, and journalist Tommy Dean, are exploring in their book chronicling the history, trends, and figures of Russian punk rock music.

Herbert says defining Russian punk rock music and its place in the country's history is complicated, but ultimately it comes down to two things - "the sound and the attitude."

"Images and ideas of defiance, whatever side of the spectrum, that's what binds them together in many ways."

Dean and Herbert have been friends since childhood, growing up in Boston and bonding over their love of punk music.

So when Herbert first studied abroad in Russia in 2011, he found himself gravitating towards the Russian punk scene. Cities like Moscow and St. Petersburg have clubs specifically for hosting punk rock shows, but Herbert's most vivid memory is of a show he attended in Nizhny Novgorod, a medium-sized city with few places to hold punk shows.

"When I was invited to a show, everybody met in the woods first, and it was getting dark so you couldn't see faces clearly," Herbert says. "I had a kid shine a light in my face and ask me who I was with...."

The punk scene in Nizhny Novgorod is secretive to avoid persecution by law enforcement and conflicting political ideologies.

"That's why they ask me who I am, so they know I'm not a fascist, as they say." Herbert says.

Punk rock emerged in America and England in the late 1960s and early 1970s. Â Andy Hollinden, a senior lecturer at Indiana University, says punk was a response to the sticky-sweet popular music of the time.

"So it was getting away from the poppy, boy-girl type of subject matter of bands like the Beatles and what-not, and just getting raw-er, sloppier, fun-er, and singing songs about drinking strychnine and having nervous breakdowns and stuff like that," Hollinden says.

But during this point of the Cold War, there wasn't much exchange of ideas between the Soviet Union and the West-so punk rock could only make its way into the country through clandestine means.

Padraic Kenney, Professor of History and International Studies and Director of the Russian and East European Institute at Indiana University, says there was an awareness of Western music in the Soviet Union, but access to it was limited to what people could get through customs - something he personally experienced when traveling to the country in 1984.

"If I had records, then yes, they would have looked through the records, and they might have taken some, and sometimes they did," Kenney says. "I'm not aware that they had any sort of rule or any sort of blacklist, for example, and you could never be sure."

Because the music that made it through could vary so widely, the Russian punk scene became very localized. This localization and subsequent variance is one of the main points Dean and Herbert hope to get across in their book.

"It's very easy to take a subculture like punk rock that was created in the West in two of the biggest democratic states in the world-America and Britain-and superimpose or transplant that into a non-Western society," Herbert says. "So to constantly parallel western punk rock to Russian punk rock is kind of an injustice-its unfair. You're not letting Russian punk rock speak for itself."

And it most certainly does. Holliden says because the political landscape was different in Russia, the music had a different meaning than in the West.

"England as they were being faced with Margaret Thatcher and the concept, or the notion I should say, of no future," says Holliden. "And in the Sex Pistols in the song "God Save the Queen," actually it was originally called "No Future." the dispossessed kids in England at that time, felt that their backs were against the wall and they had nothing to lose, and so they took a fighting stance."

But in Soviet Russia, the consequences of this fighting stance could be much more dire.

"God Save the Queen is not really going to incite any searches from whatever the British secret police is-its just kind of commercialized Syd Vicious doing his thing-where as in Russia, in the Soviet Union Yegor Letov, is singing 'I'll Always Be Against', where KGB is being pursued from show to show by KGB members who are standing in the crowd watching him," Herbert says.

Dean and Herbert say its important to note that not all Russian punk rock has the same political message - sometimes, its message isn't political at all.

"There are bands that have conservative slants, left-leaning slants, in the middle who don't sing about that or don't care about that-they just want to sing about beer and skating," says Herbert.

The Book: A DIY Project

"I think that any way we can get to know better the culture of Soviet and Russian punk, and see it not just as a thing borrowed from the West, I think that's really essential, because it was something that people experienced as their own."

But Dean and Herbert also want the book to appeal to a wider audience.

"...your average reader, whether it's a dad who used to listen to Black Flag in the 80s, or just a bored middle schooler like we were," Dean says. "But at the same time, we want it to be a smart read as well."

Herbert will travel to Russia this summer to spend 45 days conducting additional interviews and research. Every city he will travel to is at least a six-hour train ride-so the trip will require a lot of money and time.

But the pair are devoted to punk's DIY, or do-it-yourself, ethic. Instead of spending money on a publicist and publisher, they're using an electronic fundraising platform to advertise the project and raise the funds.

"We're trying to raise the money ourselves through a Kickstarter, which I guess is a modern means of DIY, because we're letting people contribute who want to see the project come to fruition," Dean says.

Those who are interested in donating to the book can do so on their Kickstarter page.