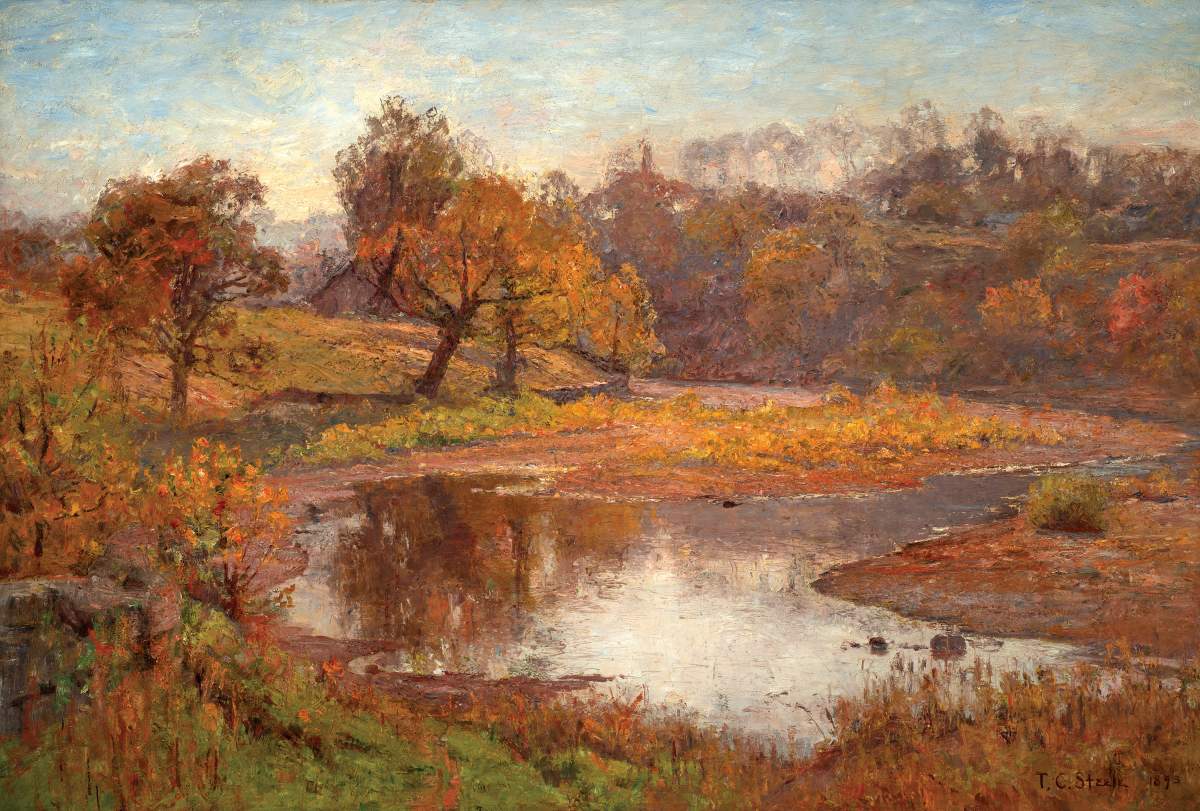 "There are physical reasons for a distinct Midwestern schoolbecause of the blue haze as a mellowing effect of visible atmosphere . . . This effect of haze softening color and tone, an artistic quality of no mean valuethe foundation for a distinct art expression of charm and distinction."

2016 marks Indiana's bicentennial, an anniversary that has prompted a thorough excavation of the state's cultural legacy. The Indiana Historical Society chose to mark the occasion by releasing a new edition of The House of the Singing Winds, the 1966 account of the life and work of Theodore Clement Steele, one of Indiana's most renowned painters. The 50-year-old book was updated with color reproductions and an introduction and essay by Rachel Berenson Perry, who also curated an accompanying exhibition at the historical society. Indiana Impressions: The Art of T.C. Steele is the first solo show of Steele's work in an Indianapolis museum since 1926, the year of his death.

Featuring rarely-seen paintings from private collections, the show spans almost 50 years of T.C. Steele's work in landscape. Although portraits were Steele's bread and butter, painting outdoors was his passion. As it turns out, the curator's own outdoorsiness served as the bridge to her appreciation of art. The retired Fine Arts curator at the Indiana State Museum, Perry has written extensively about the state's painters from the 19th to the 21st centuries. Her career as one of the pre-eminent historians of Indiana art, however, started, sort of, by accident. While touring the Steele exhibition, Perry shares the story of her own journey into Indiana art. And through the interpretation of Lou Ann Homan of Storytelling Arts of Indiana, we get to know the artist's wife Selma Neubacher Steele, who buoyed up the artist in his golden years and preserved his legacy thereafter.

There are people who denigrate Steele's paintings from his Brown Co years, and don't feel they're as good as some of the paintings he did earlier in his life, but to me, they're just fine. I mean, I think of it as his retirement. He came to Brown County and just painted what he wanted to paint. He doesn't necessarily feel that every painting has to be a masterpiece. He still had to make a living, but I still think he was pretty liberated in his attitude toward what people would buy. Sometimes he's attracted to something as simple as the way the light is in the tops of the trees on an October morning. And that's what he tries to paint.