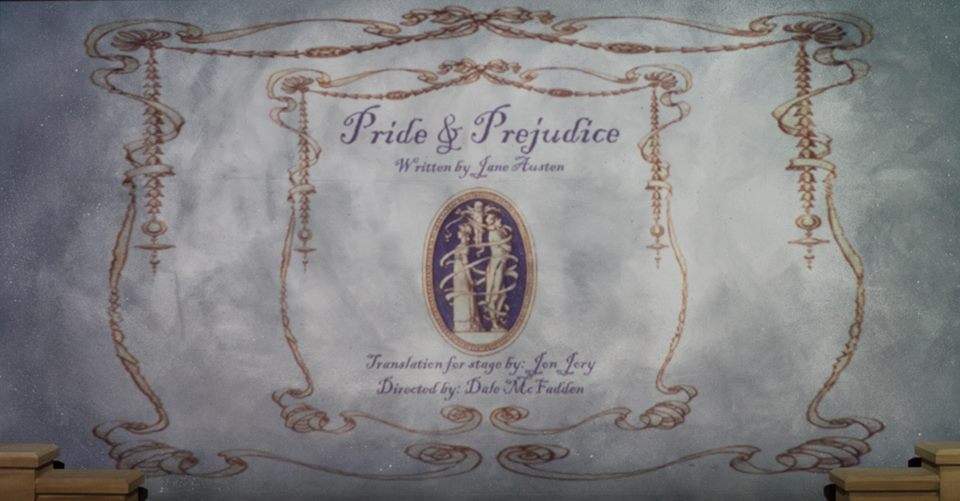 The IU Department of Theatre, Drama and Contemporary Dance presents Jon Jory's adaptation of Jane Austen's Pride and Prejudice directed by Dale McFadden in the Ruth N. Halls Theatre. I got an early look at the final dress rehearsal.

Playwright Jory clearly loves the writing of Jane Austen, he's also adapted her Emma and Persuasion for the stage, but Pride and Prejudice  is clearly his favorite. He's the author of the full length adaptation at IU.  He's  been part of its production as a musical and has written a one act Darcy and Elizabeth for high school performances. Playgoers familiar with the novel will be pleased at the skillful way that the play presents plenty of the original text.

Emily Harpe was always a focus as the intelligent, but prejudiced Elizabeth Bennett. Josh Krause was smoldering as the passionate but prideful Fitzwilliam Darcy. Zach Decker and Franki  Levenson-Campanale made quite an attractive contrasting pair as Elizabeth's rueful father and flibbertigibbet mother. Jason Craig West was simply delightful as Darcy's easy companion Mr. Bingley.

Mara Lefler as Elizabeth's romantic sister Jane, and Emily Sullivan as her quite practical friend Charlotte Lucas served nicely in their own right and as mirrors to illustrate Elizabeth's strengths and weaknesses.

Austin Wilson as Pride and Prejudice's villain, the vicious philandering George Wickham was nicely repulsive from beginning to end and strangely charming in the middle…a nice trick. Ashley Dillard was appropriately nasty as Lady Catherine de Bourgh. Connor Blankenship was very funny as her toady, the Reverend Collins.

Throughout the production direct Dale McFadden and choreographer Nira Jean Pullin work skillfully together mixing the attractively lively period ball room dances with the plot and the conversation in a play that nicely honors direct text and drama.

Pride and Prejudice by Jon Jory from the novel by Jane Austen plays Nov 7-8 and 11-15 in IU's Ruth N. Halls Theatre. You can find this review and a preshow interview  with Emily Harpe and Josh Krause on our web site at WFIU.ORG/arts