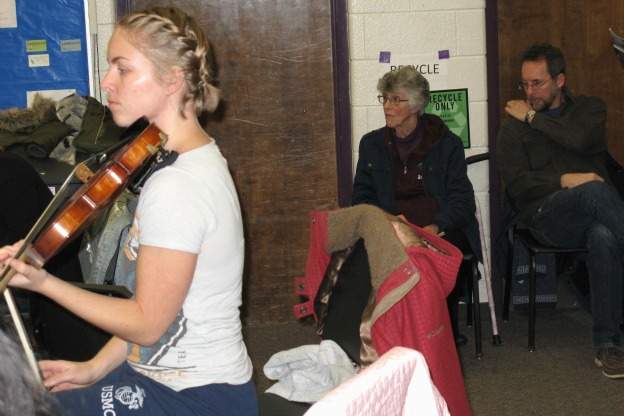 On a snowy January night, members of the Bloomington Symphony Orchestra are gathered in the band room at South high school rehearsing for a concert. This time, the conductor isn't the only one who'll be giving them cues.

"They're tired of seeing me wave my hands all the time," concedes conductor Adam Bodony. "You know, we all look for new ways to be inspired."

Poet Tony Brewer is standing next to the conductor in front of the orchestra, reading a poem inspired by Beethoven's Romance No. 2.

We've got to find a way to motivate people to come out to something that's traditionally been thought of as kind of stodgy and stuffy.

"Adam had programmed a lot of things that had references, oblique or otherwise, to literature and writing," explains BSOÂ Executive DirectorÂ Donna Lafferty. "We've got tone poems, we've got an essay, and the idea just came to me that it made sense to pair this with the written word."

So Lafferty invited the Writers Guild at Bloomington to partner with the orchestra. Along with Brewer, poets Antonia Matthew, Patsy Rahn, and Brandon Knight wrote verse to accompany musical selections for the Valentine's weekend concert Poetic License: A Marriage of Music and Poetry-

Knight, a high school poet, has written a poem that will introduceÂ Mendelssohn's Wedding March

There is a reason you were born here and now and that reason is to be beautiful!

You need to shine in a way that blinds diamonds. Â A diamond stronger than any other. Â Â It breaks the rules and won't ever shatter. A one of a kind.

"I think ten years ago or even right after the 2008 crash," Bodony reflects, "all the money dried up and the arts in general and specifically orchestras were the last to get any money from the public sector and also individuals. Â But now, I really think over the last two years, orchestras have done a good job as a whole of trying to reach a broader audience."

"We've got to find a way to motivate people to come out to something that's traditionally been thought of as kind of stodgy and stuffy," elaborates Lafferty. "Some people need a little bit more to draw them in, and make it more of an experience or an event for them."

So the BSO has been programming evenings like last year's Cosmos, featuring a performance of Gustav Holst's The Planets suite during a slide show of photos taken by the Hubble telescope.

"And the audience loved it," Lafferty exclaims. "That show sold out. I got so many compliments, emails like crazy from people saying â€˜when are you going to do something like this again?'"

Poetic License will pair readings of original verse with music and a sequence of projected photographs.

When dusk comes, the children leave, as the lamplighter rides his bicycle down the street.

Then, the ruins, the wild gardens, belong to the displaced. The casualties of war, homeless, injured, unemployed, who scavenge for anything of value. Bricks and planks, handy weapons for staking out a corner...

"Writing about music is like dancing about architecture," concedes Brewer, usingÂ an oft-misattributed quotation. "Trying to take one form and then use it to describe or infiltrate another art form is really asking a lot. We're taking a visual and a literary, and a musical thing and putting them all together at once.

"AndÂ I think," he speculates, "all those three things combined can really, hopefully, take you someplace brand new."