Play on Words: A Seventh Grader Puzzles the World 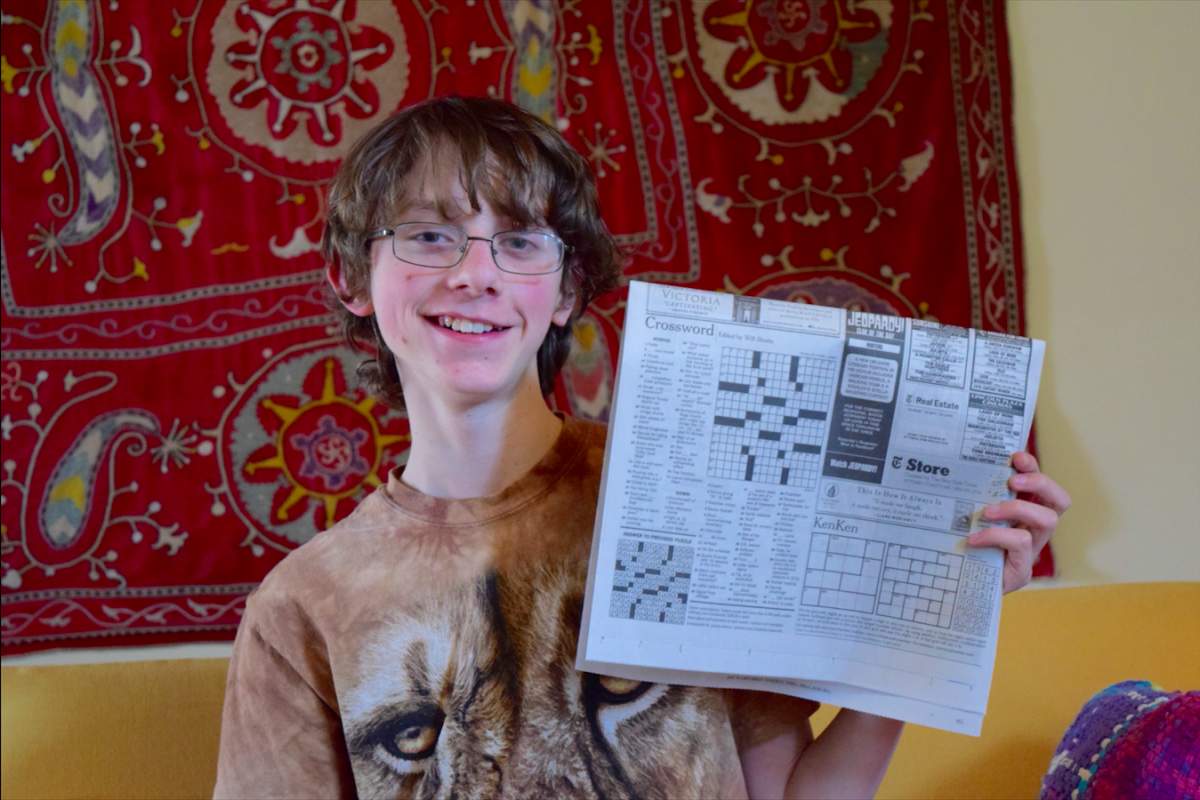 These are clues from a crossword puzzle created by Daniel Larsen, the youngest person to have his crossword published in The New York Times.

A lot of people have tried to describe why it's so satisfying to solve and construct a crossword. Some say we're wired so that when we see blank spaces, we want to fill them in.

At 13 years and four months old, the Jackson Creek Middle School seventh grader broke the previous record held by Arthur Bennett in 1969, who was 13 and 10 months old. Daniel's crossword was published in the Times, on February 14th, 2017, in section C3 of the paper.

"A lot of people have tried to describe why it's so satisfying to solve and construct a crossword, and it's really hard," Daniel says. "Some people say we're wired, so that when we see blank spaces, we want to fill them in."

Crossword puzzles may be associated with older people, but Will Shortz, the Times crossword editor who accepted Daniel's submission, wrote in his February 14 column that the paper actually gets its share of submissions from younger people. 36 crossword puzzles have come from teenagers since 1993.

With help from his father, Daniel created a computer program to develop crossword puzzles more easily. Although programming skills are useful, it takes a different sort of creativity to devise a theme for a crossword. Daniel's published crossword is Elmer Fudd-themed, so some of the clues are inspired by the funny way the Looney Tunes character talks by replacing Rs and Ls with Ws. For example, "crack of dawn" becomes "quack of dawn" and "treehouse" becomes "tweehouse" in Daniel's puzzle.

Despite Daniel's growing experience in crossword construction, it was a challenge to get anything published in the Times, which Daniel calls the gold standard of American-style crosswords.

"That sort of inspired me to keep on sending puzzles. I don't know if I would've done it otherwise," Daniel says. "It was like a celebrity sighting."

Shortz' Bloomington appearance wasn't as random as it may seem. A 1974 IU alumnus who created an individualized major in enigmatology, the crossword guru returns to campus from time to time. Regardless of the hometown connection, though, Daniel couldn't crack the Times. He took cold comfort in the fact that the newspaper can only publish seven of the 75 puzzles it receives every week, and continued constructing his crosswords.

This level of perseverance isn't anything new for Daniel, his parents say. His father says that his strong work ethic is informed by his practice of the violin and piano.

"I think the idea of having a very long term project, which is not an idea which is an obvious one for a child, is kind of built in to that whole experience of studying music," suggests Michael Larsen.

As a young child, Daniel also played Scrabble and the app Words with Friends. Daniel's mother, Ayelet Lindenstrauss Larsen recalls that because Daniel had a limited vocabulary at the time, he would generate his own words.

" I really remember when he was tiny, coming up with all of these things that would have been perfect, zillion point words, except they weren't quite words," says Lindenstrauss Larsen with a laugh.

By the time Daniel sat down to work on the crossword that would eventually be published, he had produced seven puzzles. With eighth puzzle sent in after many revisions, it was time to wait for a response. Although Anne and his parents contributed to its creation, they all agreed that since Daniel had completed the bulk of the work, he would claim authorship.

When he heard the news that Shortz was interested in the puzzle, Daniel recalls, " I started jumping around!"  But the puzzle, it seems, was too hard.  Shortz requested that Daniel swap out some of the obscure words for more familiar ones.

Now that Daniel has accomplished his goal of getting his crossword published, he can take some time to relax with a game of chess, another one of his interests. Still, Daniel says he's not ready to stop constructing the puzzles. Shortz wrote in his column on Valentine's Day that he can't wait to see more of Daniel's work.

"I actually sent a puzzle recently. Well, one and a half puzzles recently," Daniel admits. " I'm going to keep constructing them, and hope that I get another."