Planting The Seed Of Modernism In The Brown County Hills 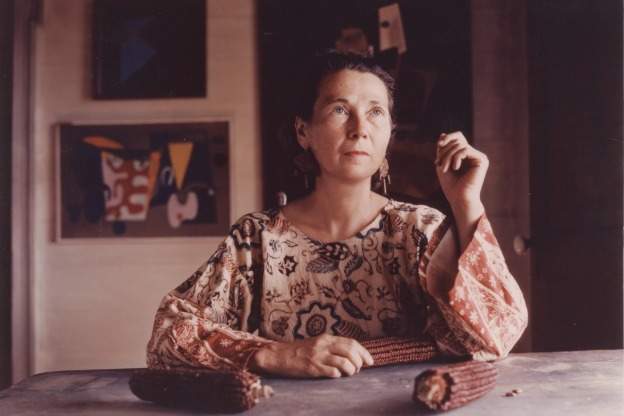 When one considers the collectors and curators who led the charge of modern art, the portrait consistently emerges of someone wealthy, urban, and socially connected. Now picture the Brown County, Indiana art scene during the same era-where impressionistic landscape painting had never gone out of style. An exhibition at the Indianapolis Museum of Artalong with a companion show at the Indiana University Art Museuminvites us to consider that neither of those images is quite so simple.

Before the US entered World War 2, Ernie Pyle spent a summer in Brown County, observing some of the locals. He devoted one column to a lady who, like himself, had just arrived.

"Onya LaTour is doing a remarkable thing," Pyle begins, in his 1940Â essay. "It's so unusual it's hard to believe, until you know her. She's trying apparently without thought or means of recompense to present to the people of Indiana an understanding of modern art."

But in 1940, "the people of Indiana" were not necessarily receptive to modern art. To understand just how unreceptive Hoosiers were at the timeeven the Hoosier cultural elite-it's helpful to note that when the Indianapolis Museum of Art was considering acquiring its first works by Picasso and Matisse in the early 40s-decades after European modernism had debuted in the States-the board voted it down. Â Novelist Booth Tarkington, who was on the board, characterized the museum's demurral in the face of modernism to beÂ Â aÂ "distinguishment".

And that was in Indianapolis, the big city. So why Onya LaTour would establish the Indiana Museum for Modern Art in a Brown County farmhouse remains just as puzzling now as it did to Ernie Pyle 75 years ago

"She isn't explicit in her diaries about her motivation to shareÂ this with Indiana," explains Anastasia Karpova Tinari, who curated The Onya La Tour Collection: Modernism in Indiana at the Indianapolis Museum of Art.

"I don't know where it was driven from," Tinari concedes, "but she fought hard for her collection to be seen."

What is known, however, is that Onya La Tour had amassed a collection of nearly 500 contemporary works of art by the time she arrived in Brown County in 1940. Although records date La Tour's birthÂ in Salem, Indiana in 1896, there is little documentation of herÂ early life, not to mention her given name, which most certainly was not "Onya La Tour". Â In his column, Pyle speculates that her ancestors were "New Orleans French"; other origin stories involve a Russian paternal grandmother whisked off to France by one of Napoleon's soldiers.

It is rumored that La Tour stowed away onÂ a freighter bound for Russia during World War 1, in order to connect with artists there.Â La Tour had spent the 1920s in California, Washington State, and Puerto Rico, in the heart of experimental artistic communities. In 1934 she moved to New York City, where she took a job at the Federal Art Gallery, which represented artists employed by the Federal Art Project-one of Roosevelt's Works Progress AdministrationÂ programs. La Tour befriended and actively acquired work by the artists showing there.

"People don't think of the WPA era as this really exciting time in New York," notes Tinari. Â "People really focus on the 40s and 50s as New York as becoming the center of avant-garde art."

But the pictures La Tour bought and was given in the late 30s include some of the artists who would come to define American modernism-Stuart Davis, Arshile Gorky, and even Jackson Pollock, among many other, less well-remembered painters-many of them Russian Ã©migrÃ©s, such as David Burliuk, Ilya Bolotowsky, and John Graham. Never wealthy, La Tour grew her collection not only with gifts, but by investing in emerging artists, modeling for them, and paying on installmentschedules of which La Tour kept in her diaries. Â "For example," Tinari notes, "the two Stuart Davis paintings that she had, she really kind of saved up for them and paid a little bit at a time."

While working at the Federal Art Gallery, LaTour opened up her apartment to showcase her growing collection. First located in Harlem, and later in Greenwich Village, the Onya La Tour Gallery kept regular hours, maintained a rotating exhibition schedule, and was open free of charge. While her own project was taking off, however, Onya lost her day job.

"That project fell through and she didn't have the money to stay in New York," explainsÂ Brown County native Rob Lawless, a longtime friend of Onya La Tour's.

But La Tour had a hunch about where to land. Â According to her diaries, "someone had come to the Federal Art Gallery in New York, and told her about this art colony in Brown County," Tinari asserts.

So La Tour purchased a farmhouse on Christiansburg Road, 11 miles southeast of Nashville, installed her collection, and opened her doors to the public. "ItÂ was certainly not your typical art museum," Tinari acknowledges. Â "If you look at pictures of Onya LaTour's Indiana Museum for Modern Art, you'll actually see that she put paintings on the outside of her farmhouse."

Art Off The Grid

A bane to art conservators decades later, La Tour'sÂ unconventional advertising didn't do a whole lot for attendance at the time, either. Most of her visitors were students escorted by Henry Radford Hope, longtime director of IU's School of Fine Arts and founder of the IU Art Museum. Hope sponsored exhibitions of La Tour'sÂ collection on campus, and purchased several of herÂ most important pieces. But the members of the storied Brown County Art Colony weren't impressed.

"Her artwork was not accepted here," asserts Lawless.

"Definitely not," Lawless' wife Judith adds. Â "They didn't like what she was collecting because they were impressionists, landscape artists."

When La TourÂ came to Brown County in the 1940s, many of the artists one might think of as having belonged to a previous era were still alive, and working. Â Artists such asÂ Adolph Schulz, L.O Griffith, Will Vawter, V.J. Cariani, and Marie Goth. Â "I knew Marie Goth," Judith Lawless confirms, "and Rob's mother was a good friend of Marie Goth's."

But, according to Judith and Rob, there wasn't a lot of love lost between the landscape painters and Onya La Tour. And it wasn't all about aesthetic differences. "They didn't like her lifestyle," Rob surmises.

Rob shows me a sepia-colored photograph from the 1950s of La TourÂ and a group of eight guys posing with nutty props out on the lawn in front of the farmhouse. Â La TourÂ gave him the framed picture; theÂ names of those pictured are written in longhandÂ on the back. Â They were photographers, Rob explains, writers, and theatre people. Â The photograph is reminiscent of ones taken on the eastern end of Long Island in the late 40s and 50s, pastoral scenes whereÂ Frank O'Hara and Larry Rivers are mingling with Pollock and de Kooning, barefoot and drinking cocktails. Â That such a bohemian lot could be found in Brown County in the same era seems incongruous. Were they unusual for Brown County at that time? I wonder. Â "Definitely unusual," responds Judith, "They were hippies before there was aÂ hippie generation."

La TourÂ was nothing if not an individual. In the late 40s she set about building a contemporary house she christened "Spellbound".

"The first time a friend of ours saw Onya she was building Spellbound House, most of it herself," recounts Judith. "She was in a flaming red Mexican skirt, hauling concrete blocks up a rope, building that house."

"I think there was definitely a lot of 'who was this woman?' and 'what is this artwork?'," Tinari explains. Â "InÂ one note in her diaries, when she first came over, she said she was having a hard time finding a job, because people thought she was a communist, and was showing her collection as propaganda, because she was involved in some of these more left-leaning artistic circles."

But it wasn't just Onya's liberal political outlook that may have alienated the Brown County establishment.

"Well let's just say that at our wedding, she hung a banner, two stories high out the window, on the balcony, where we had our reception," recalls Judith. Â She and RobÂ were married at Spellbound HouseÂ in 1973. Â "And on that were pinned mementos-a full two stories of mementos-from each of her lovers. Â There wasÂ a lot of jewelry attached to it."

"She was proud of it," Rob remembers. Â "Yes, very proud of it!" Judith agrees.

"I think I recall that she'd been married a time or two, possibly," recalls Charlie Roush. Â Born in 1940, Roush grew up on the property next to La Tour'sÂ farmhouse museum. "That never entered the picture as far as we were concerned. I'm sure my mother knew that, but it didn't matter. She was still going to be a friend and help her."

La Tour's glamorous image notwithstanding, the art maven was often struggling financially. Â The Roushes had livestock and a garden, and were able to provide La Tour with sustenance and extra hands. Â Roush remembers helping La Tour with the construction of Spellbound House. Â His father was summoned to find La Tour's daughter Manya when she'd disappeared one winter night.

Nor was Onya aloof. Two photographs by Brown County news photographer Frank Hohenberger show a gathering at La Tour'sÂ home of the Van Buren township Home Economics Club, in 1946. Farm wives in pale printed dresses poseÂ across Onya's front porch, canvases on the exterior wall behind them. Onya's the one in black.

"She certainly looked different the way she dressed from the rest of the women in that picture," concedes Roush. "But she got along with everybody. And she took interest in me as a kid."

La TourÂ created a wall hanging for Roush'sÂ bedroom, and helped him paint his ugly linoleum floor. Â "She and I set about just sponge painting that whole floor-it was a pretty good sized room," Roush recalls. Â "We tore that house down in 2007 and the excavator was already working on the house. Â I peeled back the carpet and it was still there."

Over the years, RoushÂ and his wife have built a considerable art collection of their own-mostly Brown County landscape paintings. Although his taste diverges from La Tour's, he concedes that her influence in his young life may have informed his interest in art. "To a small extent, sure," Roush reflects. Â "I would say that art was something new to us."

A Place In History

Onya La Tour's legacy is more tangible in other ways and places. The room in the Nashville library where CharlieÂ and I have been visiting was endowed by funds La TourÂ left the county. The Onya La Tour Room is a beautiful suite with a fireplace and large windows that offer views of the woods. There's a painting and two busts of La Tour, along with some of her memorabilia. These items are displayed alongside Hohenberger's photos of Brown County painters and so-called hill people. After all is said and done, Onya La Tour is part of Brown County history.

But also, the history of American art of the twentieth century. In 1972, four years before her death, La Tour left the remaining 140 pieces of her art collection to the Indianapolis Museum of Art.

The Onya La Tour Collection: Modernism in Indiana is on view at the Indianapolis Museum of Art through April 12, 2015. The exhibition includes four pieces that belong to the Indiana University Art Museum, which is also currently exhibiting Â twoÂ pictures purchased from La Tour by Henry Hope. Onya LaTour: Pioneering Modern Art in Indiana is on view at the IU Art Museum through May 10, 2015.