Back On Planet Earth: Restoring Humanity To The Twitterverse 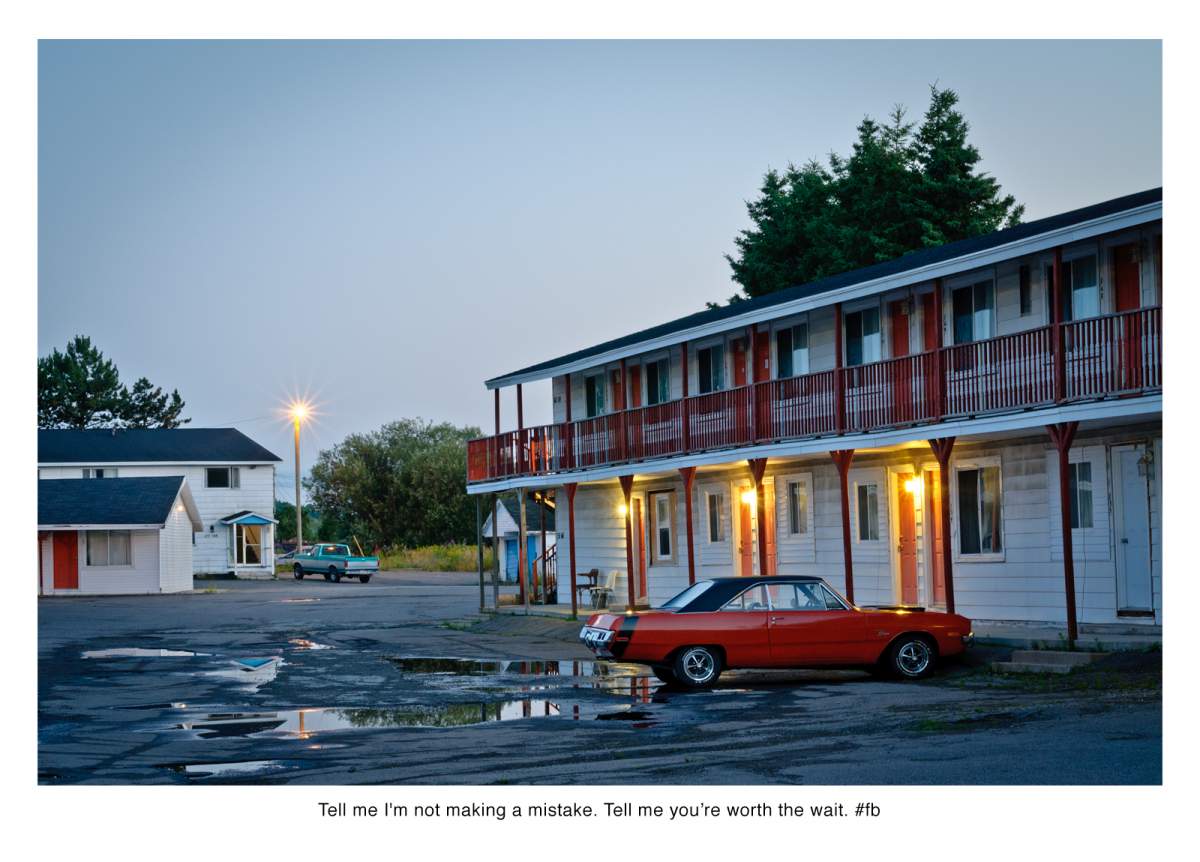 Toting his camera and a tripod through downtown Bloomington, Nate Larson is on a quest for his next shooting location. His destination has been determined fairly precisely

Using Larson's smartphone, we pursue those coordinates to a rather bleak spot on East Third Street, across from the police station, and just south of the site where the post office was demolished.

Message In A Bottle

It was not the site's picturesque quality that led the photographer there; rather, the publicly available GPS information attached to a Twitter update he happened to run across

"The tweet says, â€˜Even though I can't explain how I do a damn thing, I'll show you tonight,' with what looks like six exclamation points," Larson notes.Â "I don't know what it refers to, but I'm curious to find out."Â Although he can ascertain the spot from which that update was sent, chances are he'll never meet its sender, or discover her intended meaning. Even though she's left quite a trail of breadcrumbs.

"This is a tweet from one of Bloomington's most prolific tweeters,"Â explains Pictura Gallery Director Lauren Kniss.Â "We found it on a map that shows us real time tweets around the citywe could actually watch her going around the city, hour after hour, tweeting wherever she went."

Kniss was brought into the creative process before Larson, who teaches at the Maryland Institute College of Art in Baltimore, came to Bloomington for a retrospective of his work at the gallery. All of the photos in the show, Geolocation, by Larson and partner Marni Shindelman, were inspired by tweets.

"We noticed that Twitter sometimes includes user location information," explains Larson, "and when we started the project in 2009 that was on by default. So if you tweeted from a smartphone, it would triangulate the smartphone, and link a location with your tweet, so it might be where you work might be parking lot as you're getting out of a car, public transit, or riding down the highway.Â So we got really interested in that idea of location."

Somebody felt this thing here; this happened here. It's not this abstract blip going across your computer screen. We think of it as sort of preserving that small moment.

At Pictura, you can trace the project back to the very first tweet that sent Larson and Shindelman on their inquiry into location.Â "While researching a completely different thing, we noticed that suddenly there was this tweet on a map. The tweet said, â€˜Well, I just got laid off, despite the raise, I had a sneaking suspicion there was no moneyâ€¦and yup, I was right, I knew something was off.'"

That tweet became the caption for the photograph of a building at the corner of West Randolph and North LaSalle Streets in Chicago, seen at very close range. The street names are etched into the granite at eye level, and the only signs of life are relegated to the margins of the photo-a couple of well-groomed window boxes and the sliver of a figure cropped by the left edge.

Intrigued by the tweet, the artists set off for the site where it originated.Â Larson recalls:

When we got to the location it was an investment bank in downtown Chicago.Â We shot the photo in May 2009, which was right when the recession was hitting its peak in terms of layoffs and banks and foreclosures. We don't know anything about this person other than this tweet, so without the additional context, it really allowed our imagination to dig in. So we imagined him coming downstairs from this bank after finding out he'd been laid off, smoking a cigarette, pulling out his BlackBerry and updating his Twitter account.

The imaginative space created when a brief personal, yet anonymous message is set in context is potent. Far from neatly tying up the scene, the captions serve as a sort of prompt for any number of stories. Take this tweet, for example-

Tell me I'm not making a mistake. Tell me you're worth the wait. #FB

Then imagine the dramatic potential of that message in context:Â a little roadside motel with a vintage red muscle car parked in the lot outside.

Between the provocative message and the suggestive locale, Larson and Shindelman, and in turn, the viewer might imagine any number of scenarios. What starts with a direct quote and a documented location transforms into fiction, or poetry, fast.

Arriving at the roadside motel, the artists took hundreds of pictures in every direction from an area within 15 feet of the pin Google dropped on the map, as they do at most of the sites they track down. Choosing to photograph the two-story motel, at dusk, just as its lights had come on, with the red Dodge Dart Swinger in the foreground, was an artistic choice, allowable within the parameters of the project.

The artist's poetic license, however, never shields them from the understanding that these are real lives they're trailing.

We don't know any of the people whose tweets we photograph," Larson acknowledges. "These are all people in cities and locations and suddenly we have a record of their movements and where they live and where they workâ€¦where their friends' houses are, what bars they go to. We're not hacking or breaking into anything-this is all publicly available-but because it's publicly available we feel almost an obligation to somehow pay tribute.

Larson concedes that the tribute is nominal

Â There's a river of data washing over us every day, right? And we're plucking out little pieces of it.Â It's only the smallest fraction, but this little bit of data is preserved whereas otherwise it would just disappear into the vastness of the Internet. We see ourselves as archivists of sorts. We're archiving these bits of fleeting or ephemeral information.

You know somebody felt this thing here; this happened here. It's not this abstract blip going across your computer screen. We think of it as sort of preserving that small moment.

Gossiping Over The Garden Fence

Larson and Shindelman take their ambition to connect with real lives to the next level with site-specific projects in New Brunswick, Canada, southern California, and rural England, among other locales.Â They've been invited to make tweet-based photographs in communities where the work is subsequently exhibited.Â A recent project took them to New York where the photos they took were printed "as a vinyl fence material in the same neighborhood that the tweets came out of," Larson explains.Â "We see that as sort of returning that data to that neighborhood that produced it. And maybe allowing neighbors to know something more than they would have known about their neighbors."

Depending on one's perspective, that outcome might sound cozy and community-building, or represent yet another blow for privacy.Â The artists are using publicly available information and taking photographs in public places, but it's hard to deny the whiff of surveillanceand even exploitationcontained within the project.

The artist concedes the resemblance

I think internally that keeps the conversation going for us, too," Larson admits. Â "It's hard to know where those lines are these days. Even the [National Security Agency] doesn't know where those lines are clearly. If we contribute to that discourse, if it makes people troubled, and linger with that idea, hopefully it informs public policy in the future. We don't propose to have answers, but we think the answers are really key to this moment in our contemporary lives.