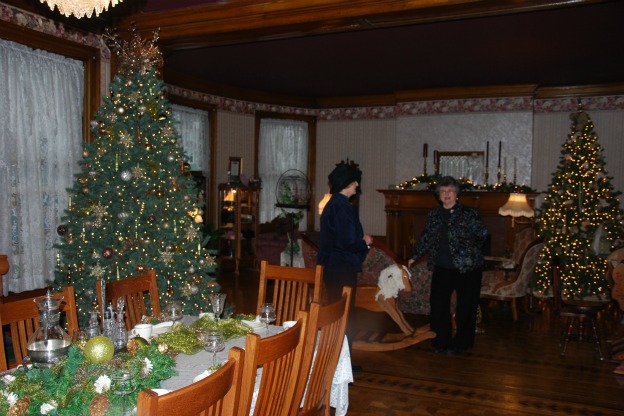 When Terre Haute was the Crossroads of America, Farrington's Grove was its best address.

The Hulman dynastywhich will forever be associated with the Indianapolis Motor Speedwayowned several homes in Farrington's Grove. Renowned poet Max Ehrmann lived nearby, as did Chapman Root, whose glass company designed the original Coca-Cola bottle.

The Cradle Of American Enterprise

It's hard to fathom that such fixtures of American enterprise as the Indy 500 and a bottle of Coke can be traced back to a single group of about 1,100 houses, all built at the turn of the last century on what had been James Farrington's farm.

Every first Sunday in December, the present-day homeowners in the Farrington's Grove Historic District invite in community members for the Holiday Home Tour. Five residences, along with the structure that houses the Vigo County Historical Museum, have been festooned for the holidays. These are interiors that provide the ideal setting for a twelve-foot fir-or six.

Showcasing the neighborhood during the holiday season is a pitch-perfect way to access the heart of its preservation efforts.

Scott and Tammy Kleinknight's two-and-a-half story frame structure in the Free Classic style was built for the Cox family, sometime partners with the Hulmans, who later owned the house. Completed in 1900, the house is a constellation of steep gables and Doric columns.

From the grand central foyer, an enfilade of rooms leads the eye down toward the original dining room, a rhapsody in cherry wood, from the coffered ceiling to the intricately carved cabinetspanning an entire wallthat once housed the home's pipe organ.

"When the Coxes had their big social event, their organ recital," Scott Kleinknight noted, "people came from as far away as Pennsylvania."

And when all those guests showed up, they would be well taken care of. The imported parquet floor is punctuated by strategically placed floor buzzers that the host and hostess would tap to summon the help.

"There's a whole story there that's so removed from how I live," exclaimed Rebecca Clapp, another Farrington's Grove resident who was making the rounds. "There was never a utility room in my home, because they always had their laundry sent out. And they had a cook."

Kaylynn Sanders, who has served as the president of the Farrington's Grove Historic District, owns a home with an elevator. "And I'm sure the servants who worked in our house rode it," Sanders speculates. "It opens on every floor from attic to basement."

How The Other Half Lives

These days, though, there's no staff riding up and down to wait on Kaylynn and her husband Dan, who only use the elevator to haul heavy objects. In fact, the empty-nesters can barely begin to use their 6500-square-foot house. "In my house," Kaylynn admits, "we more or less don't live in any room downstairs except the kitchen."

These homes, built for the wealthiest Americans of 1900, have price tags that suit today's average earners.

It's a simple case of supply and demand. Terre Haute's moment as the Crossroads of America has passed, and the captains of industry have found greener pastures. Their architectural legacy, however, is mostly intact, even though many of the landmarks of Terre Haute's glory days are not.

Dan credits the neighborhood's survival to a now-retired Indiana State University professor of art history and architecture, who has long resided in Farrington's Grove. "Harriet McNeal was the impetus in getting this district established," he asserted.

In the early 1980s, McNeal proposed to her architectural history class that their semester project consist of preparing the documentation necessary to nominate the Farrington's Grove neighborhood for inclusion on the National Register of Historic Places. The students agreed.

"There were 1137 properties that we analyzed," McNeal recalled. "It was an enormous job, and finally in 1983 it came through." The Farrington's Grove Historic District was one of the first to attain that appellation in the state.

Being listed on the National Register, however, does not provide penalties if the property is demolished-nor does it provide funds or tax incentives for their preservation. With property values dwindling, the neighborhood's survival has been tenuous.

"My home was in desperate disrepair," tour host Tina Copeland conceded, "so I got it at a bargain basement price. I bought it because I was afraid the wrecking ball was the next step. Even though I still have original woodwork and marble fireplaces, nothing was functioning. Everything has to be redone just to make it habitable."

It's a labor of love, but it's far from unique here.

"Some very good friends of mine restored a house twenty years ago, " McNeal recounted, "sold it with the understanding that it would be kept in good condition, but it wasn't. So twenty years later they bought the house again, and restored it again."

When 6,000 square foot houses tricked out with their original parquet floors, stained glass windows and marble fireplaces can't seem to fetch more than 200 ,000-even in pristine conditionthey are probably not attracting your average real estate investors, hoping to flip. So what brings people to care so much about these old homes?

A Home With Character

"I decided I wanted a historic house," explained host Elaine McVay, "because I didn't want to be the only character in the house." McVay owns the home that was loved so much it was restored twice.

Like many Farrington's Grove homeowners, McVay has done some research into the characters who preceded her. The home was built is the early 1900s for the Milk family, which owned it through the 1950s. Milk's manufacturing facility in downtown Terre Haute produced Milk's Emulsiona constipation cure. "The active ingredients included petrolatum and glycerin," read McVay from the label of an antique bottle of the elixir she displays in the kitchen.

"To me it's about preserving history," Copland concluded. Like many of the Farrington's Grove homeowners, Copland has spent countless hours at the library and online poring over public records and genealogies to unearth information about her home and the families that owned it. "I want the whole story with the home. It's not just about the home."

For others, the allure is even more ethereal.

"People have a mindset about the comforts of home," Kaylynn Sanders mused, "and they think of these old places that used to be grandma's house. You get a Christmas card and it's not a ranch-style house, it's these old Victorians. It's the atmosphere."