Picturing A Pathway Through Emotional Terrain 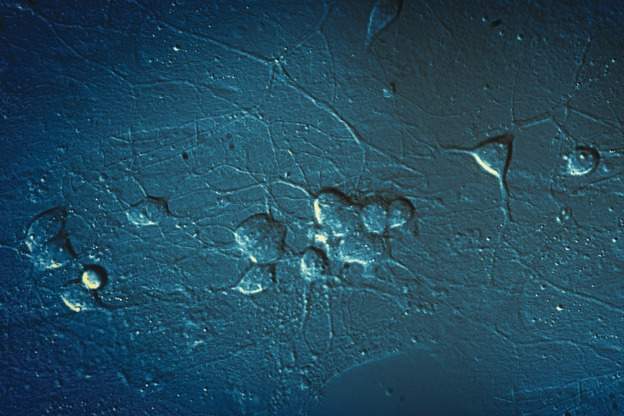 For the current show at the Grunwald Gallery of Art, artists and scientists teamed up to create collaborative projects that have their origins in scientific images, recordings or imaging techniques. A very literal interpretation of the network idea lies at the core of video artist Arthur Liou's project for the exhibition Imagining Science. For his video installation Sonnet 27, Liou, teamed up with two scientists to produce a meditation about our brain's internal communication system.

Through the Center for Integrative Photographic Studies a campus consortium that brings together all of the people who incorporate photography into their work-from artists to journalists to scientists, Liou connected withÂ Jim Powers, who manages the Light Microscopy Imaging Center, a microscope facility available for researchers at IU. Having worked with microscopic imagery in the past, Liouwho teaches digital art and video in IU's Hope School of Fine Artsembarked on his project for Imagining Science

"I thought I was going to make some really attractive images with cells," Liou recalls, "something that was energetic and emotional. But I had no idea what I was going to work with."

With a connection to live microscopic imaging and another to music by Melody EÃ¶tvÃ¶s, a doctoral student at the Jacobs School of music who had scored previous video projects Arthur had made, he some essential raw materials for his piece, but the ideas weren't quite there.

"But once I got to know Alex's research," Liou avers, " it was a really eye-opening experience."

Alex Straiker,Â research faculty member of the psychology department in the neuroscience program, studies the brain's internal signaling system.Â Liou became acquainted with Straiker's research into the endogenous signaling system that is activated by cannabinoidschemical compounds that are found in plant formbut that are also created by the human body itself. The form of the compound that's created "in-house", so to speak, is called an "endocannabinoid". And the body also has a system of receptors that those compounds can plug into.

So when someone smokes marijuana, or when the endogenous signaling system is somehow activated by our own endocannabinoids, "You'll have all kinds of effects," Straiker asserts, "a drop in body temperature, an effect on the olfactory system, effects on memory, but the fact is that the first thing people experience is euphoria."

That probably isn't a newsflash to any generation since Woodstock.Â But what is fairly newsworthysomething that Straiker's lab has been studying over the last decadeis that the euphoria, the memory suppression, and other physiological effects of smoking pot are a function of a different neural signaling system than had been previously studiedthat is, the system that carries messages from neuron A to neuron B.

"The idea is that [cannabinoids] serve as a feedback inhibitor," concludes Straiker, "At a given neuronal circuit, that's what they do." In other words, cannabinoids reverse the feedback loop, even in the most colloquial understanding of that expression. They activate a retrograde signaling system. This is the way that neuron B gets to talk back to neuron A.

"This is a way of hijacking the system," he states.

Research has demonstrated that mice that lack cannabinoid receptors are unable to forget a painful experience.Â Better understanding this endogenous signaling system may have implications for people suffering from post-traumatic stress disorder.

The particular role that cannabinoids play in forgetting became the driver of Liou's video project.Â Having recently endured a family tragedy, Liou was intrigued by the idea that the brain might have its own process for suppressing painful memories. Beginning with live imaging of neural networks produced at the microscopy center, Liou's film started to take shape.

Footage of pulsing neural hubs with rays shooting off of them in seemingly erratic patterns is embedded within a narrative set in a prehistoric era, suggested by the presence of a human creating pigment and making paintings on a cave wall. We see a marijuana plant, thrown onto a fire, after which we're taken on cinematic journey from the microscopic neural landscape through a variety of panoramic wildlife scenes and ultimately back to the cave. But it's by no means a travelogue.

"The landscape sequence is meant to suggest some kind of mind travel," Liou explains.

The theme of traversing an emotional landscape exists in another source that inspired the project. In his research, Liou found scholarly speculation that Shakespeare had used marijuana in composing his sonnets. That thematic overlap led him to discovering Sonnet 27, in which aÂ restless sleeper longs for a distant beloved.

Liou gave his film the same name, as a memorial.