A Most Perfect Machine: Rekindling Interest In The Book 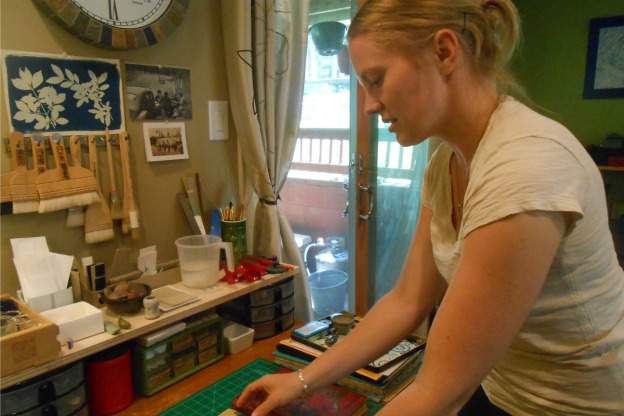 Now in its third year, The Bloomington Open Studios Tour offers visitors a backstage pass to artists' workshops tucked in all over town, from recognizable storefronts to unlikely cul-de-sacs. Forty artists working in a variety of visual media open their studios this Saturday and Sunday to the general public for a self-guided tour. The experience has the potential to be particularly illuminating when it comes to the less widely-practiced art forms-such as book arts, for example.

Book artist Mary Uthuppuru embraces the prospect of inviting visitors into her studio as an opportunity to re-"kindle" interest in her medium.Â It's a challenge, since books are, even in this digital age, so ubiquitous.Â "You don't think about how a book is put together," Uthuppuru reasons, "because it's everywhere. But having people come into the studio and see how it can be put together in a way that's different makes them think again about how they interact with that object, which is really important for me because I'm trying to do something different with a very familiar thing."

Who thinks of a book as a machine, or as serving a purpose other than just holding stuff?

True, some of what Uthuppuru does is not completely unfamiliar. A book conservator at Indiana University's Lilly Library for a number of years, Uthuppuru's bread and butter, still, is the preservation and repair of old books. But it's the other work she does in her studio that's a little harder to understand, because it shifts the function of the book"the book as a piece of artwork," Uthuppuru explains, "as opposed to just something you're getting information from."

The field of book arts, artist's booksthe French term "livre d'artiste" is even called upon to define the medium in some circlesis diverse to say the least.Â Uthuppuru tries to provide a definition:

It's something that is still constantly being defined, and a little debatedan artist's book, it seems, can almost be anything.Â Maybe it looks like a traditional book, or maybe it looks more like a sculpture.Â Maybe it unfolds, or there's some sort of interaction between the viewer and the piece.Â Some book arts don't have text in them.Â The medium is really broad.

Digital is convenient; it's small; it travels light.Â But in terms of a lot of things, we sacrifice the authentic experience for the convenience.Â Maybe there are a lot fewer commercial books around, but the artifact of the book just becomes that much more intriguing and important.

In her original work, Uthuppuru consistently returns to the concept of the book as a physical, mechanical object-a function that gets eclipsed by the book's role as a vehicle for information.Â "Who" wonders the artist, "thinks of a book as a machine, or as serving a purpose other than just holding stuff?"

She celebrates this undersung identity in a design binding for a pre-existing text on the history of books. Her cover features interlocking wooden cogs onto one of which a quotation from the book has been transferred-

The codex is one of the most perfect machines the human race has ever invented and in its many manifestations, it has successfully conveyed the human record for 2000 years.

In other works, Uthuppuru strays farther afield from the time-honored format of the codex-and references it only slyly. A piece might be packaged in a traditional book box-the kind she used to make for rare books at the Lilly Library-but open up on an accordion-folded binding to become a puppet theatre, or a stereoscopic view of the Taj Mahal. Even these imaginative extrapolations of the book concept remain rooted in the craft through their materials-hand-made papers, for example-and components.

That digitization is rendering these kinds of material concerns about books increasingly irrelevant is not only the subtext of contemporary book art, but, it seems, grist for its mill.Â Uthuppuru concedes

Digital is convenient; it's small; it travels light.Â But in terms of a lot of things, we sacrifice the authentic experience for the convenience.Â Maybe there are a lot fewer commercial books around, but the artifact of the book just becomes that much more intriguing and important.

Uthuppuru, who operates as Spring Leaf Press, invites visitors to her east-side Bloomington studio Saturday and Sunday during the Bloomington Open Studios Tour.