Parsifal at the IU Opera Theater 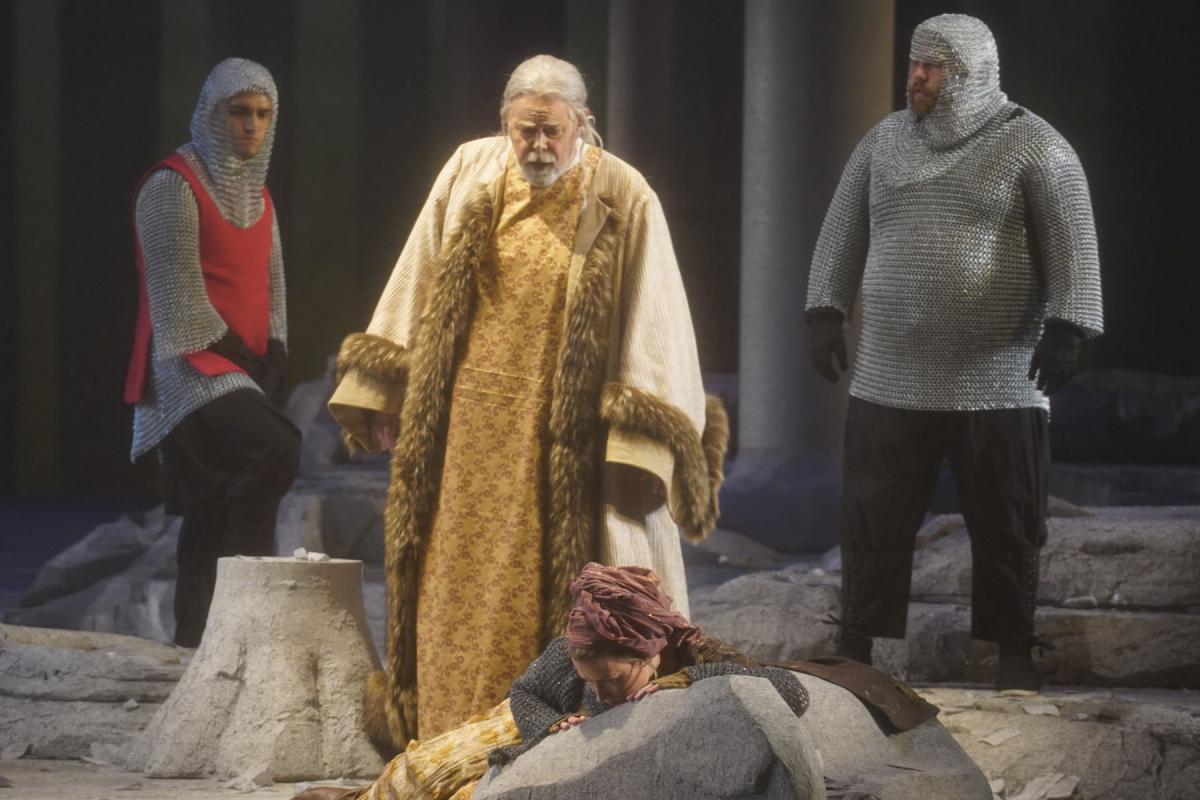 Richard Wagner's Parsifal was the opera that put the IU School of Music on the nation's musical map in the early fifties and it continued with yearly performances well into the 1970s. This fall as part of IU's 200th anniversary, there are three opportunities to see this once in a lifetime staging in the Musical Arts Center.

Arthur Fagen conducts the production with students in the orchestra, taking compromario roles, and participating in choruses joined with an international cast and creative team. The staging on the sets designed by S. Katy Tucker and enhanced with her videos is by Chris Alexander. Use of a scrim allows white barren wastes to become green and verdant quite magically. Creative costuming is by Linda Pisano with lovely gowns for the flower maidens, knightly garb for the grail knights and an especially frightening horned outfit for the wicked Klingsor. Visually, musically and vocally it's quite a show.

After a lengthy overture the drama begins as Gurnemanz, an elder knight of the Holy Grail relates the background of the story. Kristin Sigmundsson is an eloquent singer in the extended account of how Kundry betrayed Amfortas to the sorcerer Klingsor who stole the sacred spear and inflicted a wound that can only be cured by a pure fool.

The central emotion of Parsifal is guilt. Yes, we're all familiar with it from white lies to grey matters and even to black deceptions. Its guilt that comes from love with a lower case l and is conquered by experience, compassion and love with a capital L. Kundry's guilt came as she laughed at Jesus's passion and it's both maddened her and put her in the power of Klingsor. Klingsor's guilt is of from his attempt to overcome his own passionate nature by castration, the magic power that this gave him and his thirst for vengeance. Amfortas was the leader of the Knights of the Grail and foolishly made love to Kundry while Klingsor stole his spear. The wound that he bears is a continuing reminder of his guilt.

Parsifal, the pure fool appears having innocently shot a swan and in apology breaks his bow. Gurnemanz accepts his apology and is disappointed when Parsifal seems unmoved by the knights' celebration of Holy Communion. We break for a forty-five mnutes for dinner.

The departing Parsifal enters to recover the spear and in a projected garden encounters the lovely chorus of Flower Maidens. As they compete for his affection Kundry appears, kisses Parsifal and this opens his memory. Klingsor hurls the purloined spear, Parsifal seizes it and Klingsor's castle is destroyed. Kundry is disappointed in love with a lower l and curses him to take the spear, and to wander. We break for fifteen minutes.

During the fifteen minutes, years pass and Parsifal finally makes his way back to the aged Gurnemanz, Kundry and the scattered knights. As they recognize him, refresh and bathe him, he baptizes Kundry and joins the knights and the doggedly resisting Amfortas for Good Friday services. With Amfortas's years of suffering and Parsifal's years of wandering the spear cures the wound of guilt. The baptized Kundry dies in peace and Parsifal becomes the king of the rejuvenated knights.

Mark Delevan was a full voiced Amfortas. Mark Schnaible was a dramatic Klingsor. IU grad Chris Lysack was both the opera and his home town's hero. Renee Tatum was just amazing as a wonderfully dramatic and full voiced Kundry

There are two more opportunities to see Parsifal in the Musical Arts Center, Wednesday the 13th and Saturday the 16th at six. It's also available as a live stream on the IU Jacobs page in an enhanced view directed by John Winninger.