George Walker: Painting for One, painting in a box continues the Bloomington Playwrights Project sequence of the boxes. It's written by Hank Green, directed by Chad Rabinovitz, and it stars Mike Nappi.

Hey. Hank, tell us a little bit about the show.

Hank Green: Painting for One is a show about a guy, who with his partner Laura, usually runs a weekly wine and canvas virtual night on WVPT public access television. On this particular day, which happens to coincide with the annual fundraiser for WBPT, Laura does not arrive at the studio. Our hero, Andy, played by Mike, has to run the show by himself.  So, you get to paint along with Andy.  You also get to watch how he sort of responds to twists and turns, including… potentially needing to save the entire station by himself.

George: Mike, could you tell us just a little bit about your background that prepares you for this particular role other than your not being a painter.

Mike Nappi: Oh well, you know I've been doing theater since I was nine years old. I grew up in a theater family and my dad's a music director. You know… my mom had a hundred musical albums and studied theater. Been performing a while. And you know, obviously with the pandemic and this shutdown happening. I just wanted to be able to work on a wonderful show that Hank has written and to work with Chad again.

Mike: Well, you know, I when I read the script and Chad contacted me about this, I was- like- this sounds amazing, that it’s hilarious. It's like, full of love and that but I have to paint. I can't.  I really didn’t know how to do that. So David Wade, who I know and love.  Once I knew he was involved, so it was all going to be fine.  He talked slow and we worked a few days and he really made things clear.

George: And his set design.

Mike: His set design is great and the studio just looks phenomenal And he's really transformed the space, so it's going to be pretty fun I think, Yeah.

George: This sounds like a like a wonderful evening. I'm sorry that it's wine and canvas and that Laura won't be there with us. Yeah, and. I'm sorry that you'll be saving the station all by yourself.

Hank: It's sort of all kind of blends together throughout the evening.  Where it sort of goes from one show to another show, to suddenly many shows all at once in sort of an effort.  An effort to save our station and handle the twists and turns that come along the way. You know?

George: Wow, can you tell us a little bit about one of those twists, Hank?

Hank: Without giving too much away,..

I ended up watching a lot of. uh, old sort of public access public television to sort of prep for writing this…which was a joy by the way…and one of the things that, you know. I sort of noticed these old telathones that they used to run over and over again to sort of help raise money for the stations, They were sort of these big celebration nights with everyone. You know a lot of different stars of the station would come and sort of do little bits and promote their shows. To encourage people to donate.

So I said, you know what would happen if one person needed to do all that? What would happen if actually through happenstance, no one else was able to make it to the fundraiser? And Andy, who is just one half of one of the shows? Needed to run the entire telathone all by himself.

Mike: It’s the show we all need right now. There's just so much heart in the show.

As funny as it Is, it's just real? And    pretty amazing, that these in the box shows are on each night, so the viewers can join us in their homes.

George: Painting for One from the Bloomington Playwrights Project written by Hank Green, starring Mike Nappi. I’m sorry that Laura won’t be present nor will the cat. It’ directed by Chad Rabinovitz. Sponsored by Suan Savastuk and Glorianne Leck.

It takes place in your living room February 9th through 13th and the 16th through the 20th at 8 pm. 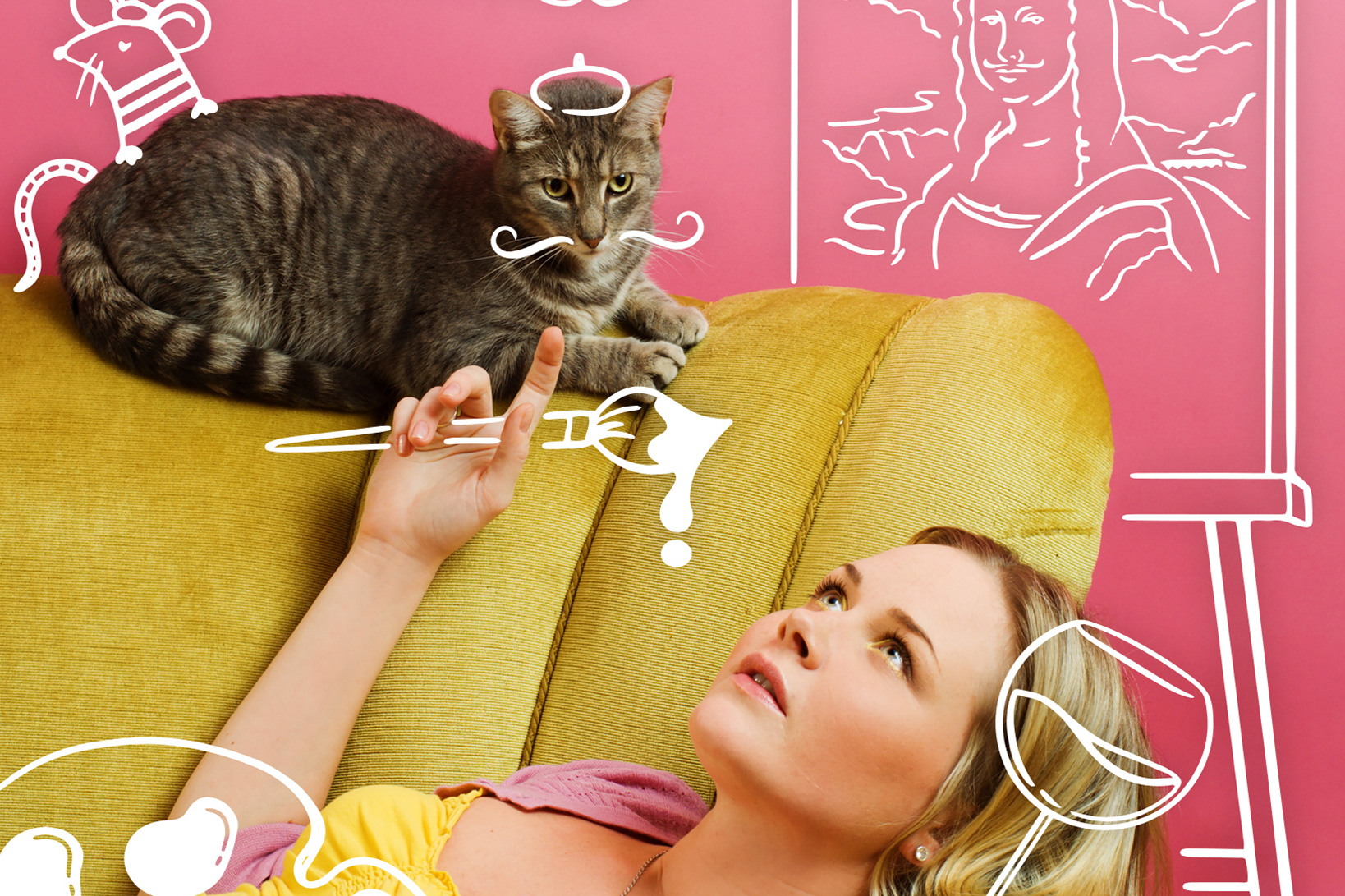 Neither the cat, nor the lady appear! (Bloomington Playwrights Project)

Follow Mike...as Andy, the hapless sole host of a painting show on public television when he tries...by himself...to conduct a fund raising telathone...against all the odds!

Actor, Mike Nappi...It's the show that everyone needs, right now!