Off The Page, On The Stage, To Where It's Needed Most 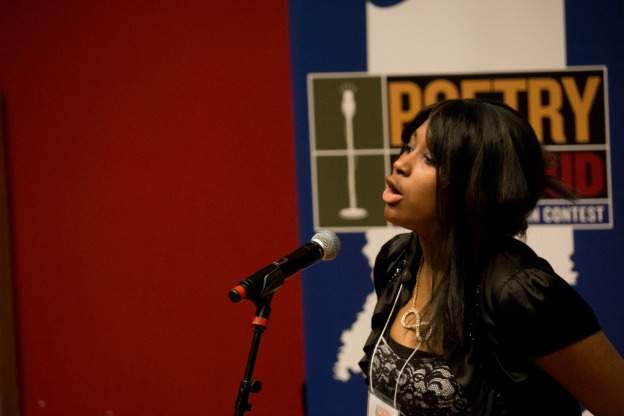 Poetry can seem like a rarefied thing these days. Despite poetry slams and public service campaigns putting poetry on buses and billboards, gone are the days when just about anyone could recite a sonnet. A national recitation contest for high school students, now in its tenth year, is reacquainting students with the art of verse.Â Poetry Out Loud seeks to "encourage the nation's youth to learn about great poetry through memorization and performance."

Bloomington High School South language arts teacher Sheila McDermott-Sipe knows that her students enjoy rhythm, rhyme and wordplay. "If they're coming home on the bus from a game, or an event," she notes, "they'll do freestyle rapping in little circles and they'll compete with each other."

McDermott-Sipe has tried to bring that excitement about words into her classroom at South.Â "But when you try to get them to do it for a larger crowd, they, all of a suddenI don't know if it's the nature of the academic settingthey feel that that's restrictive in a certain way."

When I ask them, what do you think about poetry, you get very strong responses.Â Students will say I hate it or I love it. There's not a lot of grey.

Presenting poetry is a more traditional way isn't easy either.Â Students seem have a lot of baggage about it.Â "When I ask them, what do you think about poetry, you get very strong responsesmuch more than when you ask them about other genres," McDermott-Sipe notes.Â "Students will say I hate it or I love it; there's not a lot of grey."

But she's found a way in.Â "They don't necessarily get it when there are words on the page that they're silently reading," the teacher has observed.Â "But if they can hear the tone, hear the voices, that's where it becomes alive."

"Poems aren't just words on a page, they come to life with you, and how you speak them," avers Phiona Raffington, a sophomore at Bloomington High School South. Poetry was pretty new to her when she encountered it last year as a freshman in McDermott-Sipe's class.

"When I first read poetry it was very confusing for me," she recalls.Â "I mean I kind of liked it, but I had never been exposed to it."Â Well, not for a long time at least.Â "Actually my mom read Emily Dickinson to me when I was younger," Raffington concedes.

"It definitely doesn't get the same amount of attention as novels, or short stories," McDermott-Sipe acknowledges. "It tends to be the 'oh we can do a short little unit this week on poetry.' So it tends to take the back seat."

So the language arts teacher was intrigued when a colleague introduced her to Poetry Out Loud, the national recitation contest for high school students. A partnership between the National Poetry Foundation, The National Endowment for the Arts, and state arts agencies, the contest awards a $20,000 scholarship to the national winner. The contest is built on a pyramid structure, that begins with "students finding a poem that speaks to them," says McDermott-Sipe.

I wanted to read something where at the first sentence, it would grab me, and make me feel something.

For two years now, she has directed her students to the Poetry Out Loud website, which features a massive archive of poems students can choose to compete with.Â "Once they get into that database, they kind of get lost in it. They'll come one day, and say, I spent an hour, and I just didn't find one. And then they'll come the next day and say, I found it."

Becoming One With The Poem

Raffington knew she would recognize her poems as soon as she read them.Â "I wanted to read something where at the first sentence, it would grab me, and make me feel something," she explained.Â Take Paul Laurence Dunbar's The Paradox, for example, one of her selections.Â "It's telling you to embrace it because that's what life is about.Â It is a paradox.Â You will have wonderful blessed days, and you will have horrible days, but together, it's what it is."

It's a late nineteenth-century poem written in "thous" and "shalts," but the idea of life's ups and downs speaks to Raffington, she explains, because "if you're a teenager and you're going through that phase, there's just going to be drama everywhere."

You have to go onstage, it doesn't matter what you're feeling.Â You need to make sure that the poet's words are said with respect, and with full intention of grasping someone and changing their heart.

Having long played the viola, sung, and painted, Raffington quickly took to the art of verse, winning the school-wide competition at South last year, as a freshman, and going to the state finals in Indianapolis. She didn't end up placing at States last year, but prevailed in her high school's contest again this year.Â Having prepared David Barber's Aria and Mezzo Cammin by Henry Wadsworth Longfellow, in addition to the Dunbar selection, Raffington was stoic as she plotted her strategy for the 2015 state-wide contest.

"You have to go onstage, it doesn't matter what you're feeling," she asserts.Â "You need to make sure that the poet's words are said with respect, and said with full intention to grasping someone and changing their hearts."

Raffington describes her approach as method acting.Â "I want them to look at me as a basket full of emotion. And they're supposed to grab that emotion from me," she explains.Â "I'm supposed to deliver, and that's what I want to do."

Snow that had started falling late Friday night is continuing Saturday morning, February 21st, but all of the 20 teenagers representing public and private high schools from around the Hoosier state have shown up to recite their poems on stage at the central Indianapolis Public Library. The atmosphere is subdued and the auditorium, sparsely occupied.Â There is a long pause after each poem as the six judges-including current and former Indiana Poet Laureates-tally the scores. Each student recites a poem in Round One and Round Two, with eight finalists selected for Round 3. It takes almost five hours to get through 48 poems, before the winner is named.

Plymouth High School senior Emma Libersky is named state champion for the third consecutive year. Libersky's recitation of John Keats' Ode on a Grecian Urn and Walt Whitman's A March in the Ranks Hard-Prest, and the Road Unknown in the first and second rounds respectively, earned her enough points to advance to the final round, in which she delivered American Solitude by Grace Schulman. Earning a $200 cash prize and an all-expenses paid trip to Washington, D.C. in early May to compete in the Poetry Out Loud National Finals, Libersky has also netted her school a $500 stipend to purchase poetry books.

The students were evaluated on a number of criteria, including physical presence, voice and articulation, dramatic appropriateness, level of complexity, evidence of understanding, and overall performance.

The judge suggested, 'to try to convey the voice'.Â And I said, 'Well, the voice of the poem, that's kind of open-ended!'

"Well, of course I felt really disappointed to find out I wasn't a finalist," Raffington concedes, "but I felt really proud of myself for reciting the poems the way I wanted to, and the way I feel they needed to be recited."

Although the competitors are not given written comments or scoring sheets, they are invited to confer with the judges after the contest.

"We spoke to one of the judges just to try to get an understanding, since it was the second year we attended the competition," explains Monique Dallas, Raffington's mother.Â "One thing she did convey was that Phiona's selection of poems was very challenging. She said she was very highly ambitious in her choice of poems." As far as constructive criticism, the judge suggested, "to try to convey the voice," Dallas offered.Â "And I said, "Well, the voice of the poem, that's kind of open-ended'."

"I was being more dramatic with my poems," Raffington suggests.Â "So I feel like they were looking for something that was less dramatic and more with a story that would lead the audience to the next page, not necessarily be directing the audience to how they should feel."

"Well, maybe we're not in the right competition," Dallas philosophizes, with a laugh, "because I thought poetry was just about giving that expression, that feeling and bringing the words alive."

"For me poetry is just expressing your feelings, and your inner thoughts," muses Devin Monroe, "pretty much the same thing with music."Â Monroe is a classmate and friend of Phiona's at Bloomington South, where we've gathered to debrief after the contest in Indy. "I can either read it or sing it or rap it and either way it still goes with the beat and flow."

Do you feel like you're in a box? South's poetry club poster reads, "Do you want to get out of this box? Come to this club, because this is where everything goes down.

Monroe was inspired by a video he saw on YouTube, in which "a guy was rapping Shakespeare's Sonnet 18."Â You know the one, where he asks "May I compare thee to a summer's day?"

"And he was doing it in different flows and different beats, and like every time he switched it up it still matched perfectly to it," Monroe marvels.

Raffington has pressed Monroewith his lyrical wilesinto service as she gets South's poetry club up and running this month.Â "Devin will work with those who are more into the lyrical side of poetryfreestyling with poetrywe might even include some rap battles," she conjectures.

Raffington will be coaching those interested in writing, and recitation. They will be workshopping each other's poems in the group, doing impromptu writing exercises, and partnering with the Bloomington Writers' Guild for upcoming public appearances. But Raffington's not just preaching to the choir here; the poster she made to advertise the club at school was definitely not just for prospective English majors.

I don't feel like poetry is just writing. Poetry is for you not only to express yourself but also to heal yourself.Â By the time we're done with this year, we'll probably change a lot of lives.

"Do you feel like you're in a box?" exclaims Raffington, paraphrasing her poster. "Do you want to get out of this box? Is there any way out? Does your mind feel like it has something that it needs to be released? Well come to this club, because this is where everything goes down!"

If that appeal sounds like it transcends the literary, it should. Raffington's ambitions for South's poetry club are holistic.Â Â "I don't feel like poetry is just writing," she explains, "because for you to be able to write that you would have to be able to have those emotions.Â So if someone has a poem that is not pleasant, we would also support them. It would be like a really nice family where we would all just love each other, and understand each other. And feel like it's okay to be feeling this way. But poetry is for you not only to express yourself but also to heal yourself. And I feel like by the time we're done with this year, we'll probably change a lot of lives."